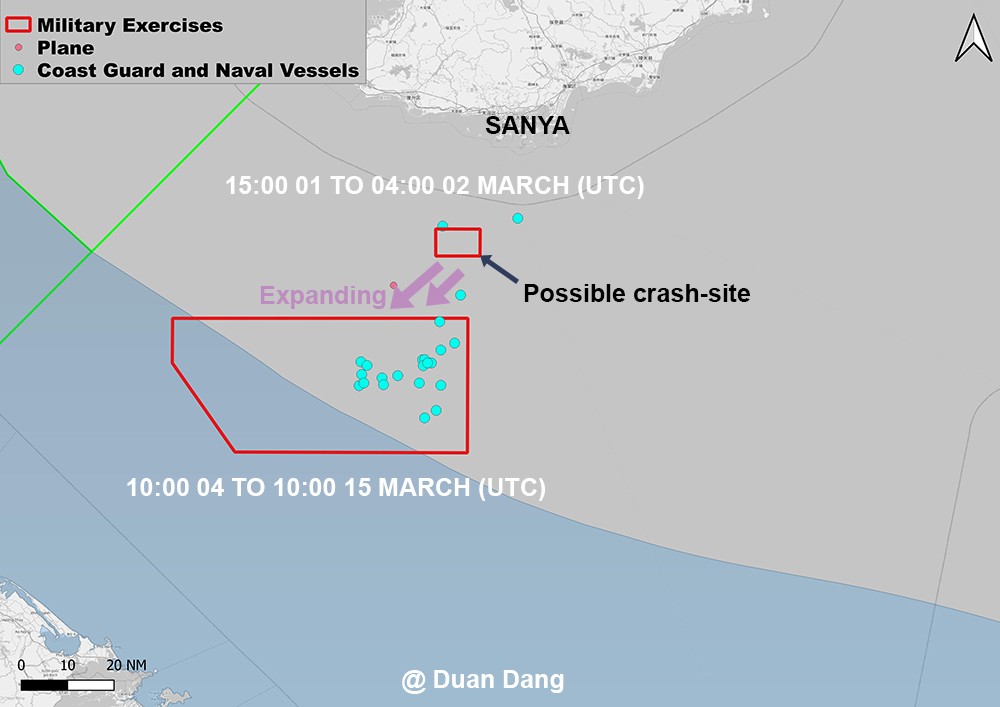 NSB Director-General Chen Ming-tong (陳明通) on Thursday (March 10) officially confirmed that a People's Liberation Army Air Force (PLAAF) plane had crashed into the South China Sea on March 1. This confirms a report by a Vietnamese journalist that a Chinese military patrol plane had crashed off the coast of Vietnam.

On March 6, Duan Dang cited sources familiar with the matter as stating that the PLAAF lost contact with a Y-8 maritime patrol aircraft as it flew over an area of water southwest of Sanya in China's Hainan Province on March 1. China soon launched a search-and-rescue operation and "concealed it with drills" from March 1-2, Dang wrote.

China never acknowledged the incident, but Taiwanese media noticed that there was a sudden drop off in Y-8 flights through Taiwan's air defense identification zone (ADIZ), with none reported from March 2 to March 7. Taiwan Society for Strategic Studies researcher Chang Ching (張競) on March 7 decried Dang's report as "nonsense," asserting that China's military is more open than in the past and that if a crash had occurred, it would not have covered it up.

However, during a session of the Foreign and National Defense Committee at the Legislative Yuan on Thursday, Chen stated that a PLAAF plane crashed in the South China Sea in early March. According to Chen, China responded to the incident by setting up a navigation exclusion zone in adjacent waters to carry out search-and-rescue efforts and "military training."

This reference to military training is consistent with Dang's claim that surprise drills in the South China Sea held close to Vietnam's coast from March 4-15 are tied to the crash. Chen then said that while the world is focused on the Russian invasion of Ukraine, it is paying less attention to the South China Sea, and China is exploiting the situation to "test the limits of the U.S. and other South China Sea claimants."

According to my exclusive sources, a Chinese maritime patrol aircraft Y-8 lost contact in the southwestern area of ​​Sanya on the afternoon of March 1. Soon after, China launched a SAR operation and concealed it with drills from March 1 to March 2.https://t.co/NEod3dZUzJ