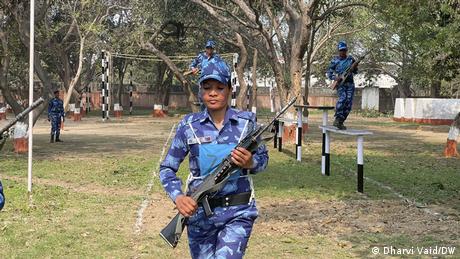 "Nothing is impossible for women," says 34-year-old Sunija Prasad, as she sits in her barracks following a grueling training session at a police camp in the north Indian city of Meerut.

Prasad is an inspector with the Rapid Action Force (RAF), a specialized wing of the paramilitary Central Reserve Police Force of India, which deals with riot and crowd control situations.

Before speaking with DW, she had spent the entire morning with 20 other female soldiers, crawling through trenches, climbing ropes, jumping over fires carrying a 5.56 MM INSAS rifle, and participating in an extensive simulation of mob control.

The women were training to be a part of a United Nations Peacekeeping mission.

"Women can be excellent peacekeepers. We can strengthen societies and make other women aware of the fact that they can do anything," Prasad, who is training for her second peacekeeping mission, tells DW.

For more than a decade, the United Nations has called for more participation from women in conflict prevention, post-conflict peacebuilding and peacekeeping.

In January this year, at the United Nations Security Council, Indian officials called for more female participation in public life and the elimination of violence against them as a prerequisite for promoting lasting peace around the world.

For the first time in the history of UN peacekeeping, India sent an all-female Formed Police Unit (FPU) to be deployed in Liberia in 2007 after a civil war ravaged the African nation.

The United Nations has said that with more women being a part of peacekeeping missions, the operations have become more effective.

Meanwhile around 34% of personnel in peacekeeping missions were women.

"Women's presence in these missions itself makes a difference. There are some cultures where the female victims are not allowed to speak to men. In that particular scenario, if you have women peacekeepers, it becomes easier for the authorities to communicate with them," Seema Dhundia, a deputy inspector-general at the RAF, who commanded the first ever all-female FPU in Liberia in 2007, tells DW.

Dhundia stresses that in conflict-ridden areas, a sizable number of victims are women and children. She believes that women are good communicators and can establish a good communication channel with victims of conflict, building trust and confidence.

"They are trained and sensitized. They are aware of the trauma that women and children have undergone. They can relate to them and because they are better communicators compared to their male counterparts, they can go deep into the societies, communities and make contact with victims," she says.

Inspector Prasad, who also went to Liberia in 2015, said that during her mission, the women peacekeepers motivated Liberian women to go to work without fear and participate in public life. They also encouraged children to go to school.

"Our mission made so much impact that they now live without fear. I loved being a part of the community outreach. We could listen to people's problems directly, involve them and also help them," Prasad says.

'The whole world was watching us'

The landmark all-female deployment in Liberia was not without its challenges. Dhundia recalls the apprehension surrounding her contingent before the women were deployed.

"It was quite challenging for us because an all-female unit was going for the first time and everybody was quite apprehensive about whether we would perform well or not. Even the UN officials in Liberia were apprehensive," Dhundia says.

"Obviously, in order to prove ourselves, we had to put in double the effort compared to our male counterparts. We knew that the whole world was watching us," she said.

Their first task in Liberia came just as they were settling in. They had to control a violent crowd of armed ex-combatants who were protesting against the then-government.

"We went there and within an hour we took care of the situation. We had to evacuate many people who were injured, we had to use tear gas. That was our first exposure in Liberia, and from that day onwards, the locals started respecting us. They started calling us 'Indian sisters.' Wherever we used to go, they would say: 'The Indian sisters have arrived and we feel safe now,'" Dhundia says.

The contingent also adopted several communities and helped victims of rape, training them in unarmed combat and in using computers.

Challenging stereotypes and motivating other women

Prasad of the Rapid Action Force says that many Liberian women saw the women peacekeepers as role models.

"The charm of the female troops motivated many women to join the Liberian National Police and participate in rebuilding their society," she says.

In a profession that continues to be heavily dominated by men, and in a nation that is riddled with gender violence, these female police officers from India are breaking stereotypes to represent their country on the world stage.

"The physical efficiencies of men and women are different. But women are very strong mentally. And because they are mentally strong, they manage physically as well. I don't feel that I am any less than a man when I train," Constable Pinky Singh, who is also training for UN deployment, tells DW.

"Our society allows women to work in professions like teaching but not so much in the forces. If we do our duties successfully, we can motivate people to send their daughters and sisters to join the forces, not just in India but also in the countries that we go to," says Singh.