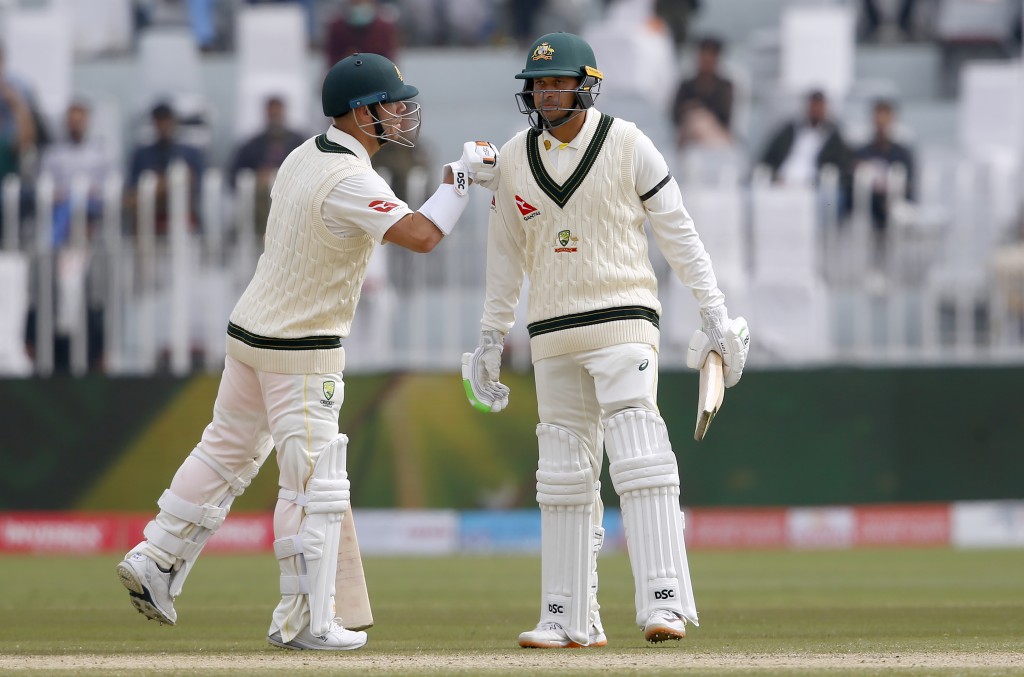 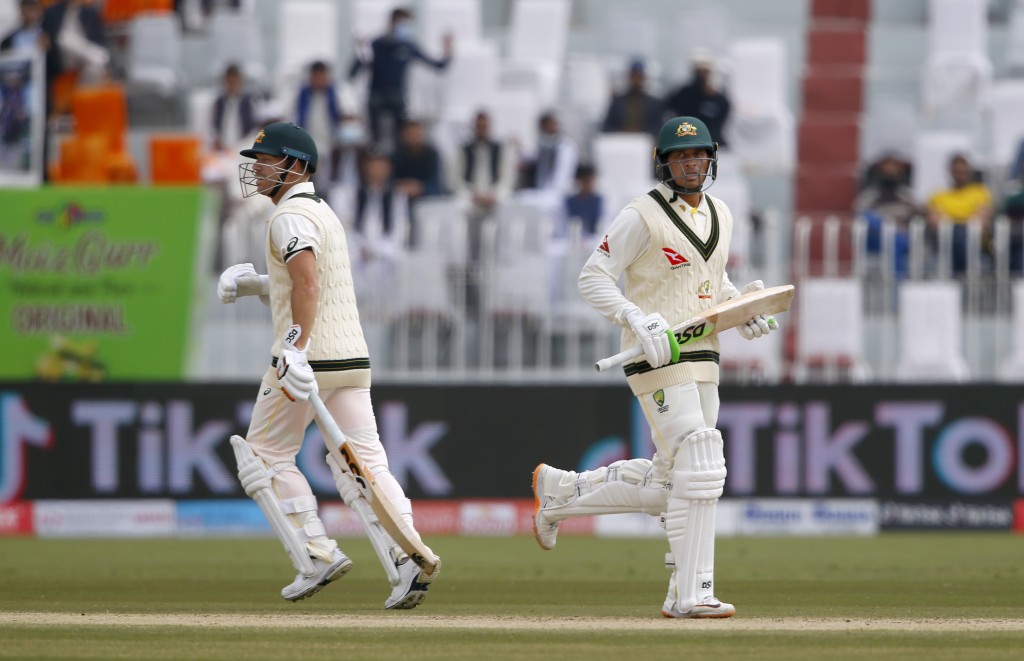 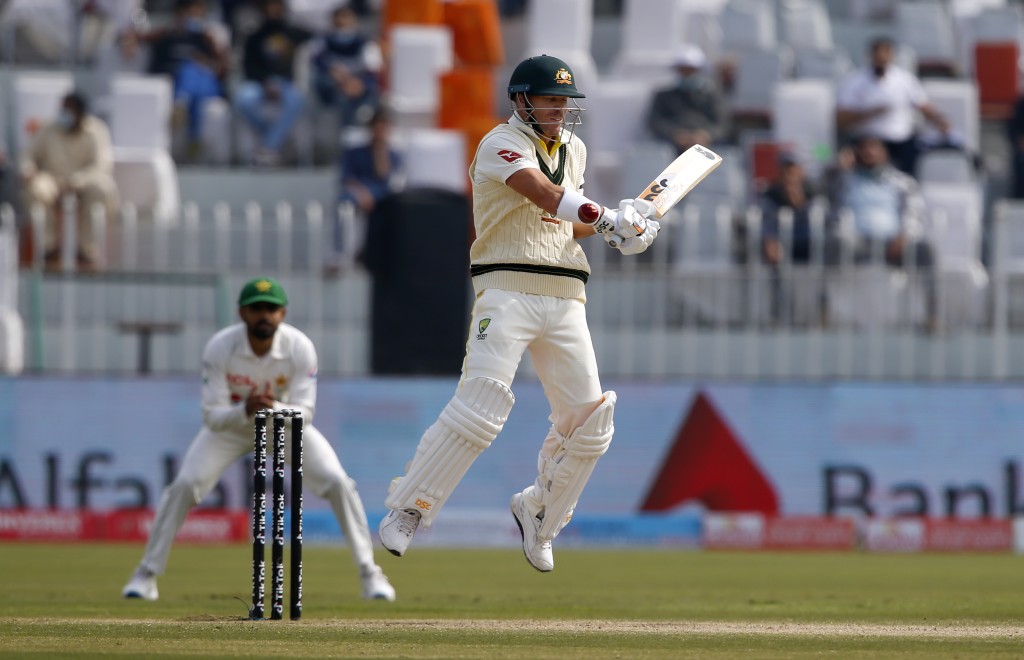 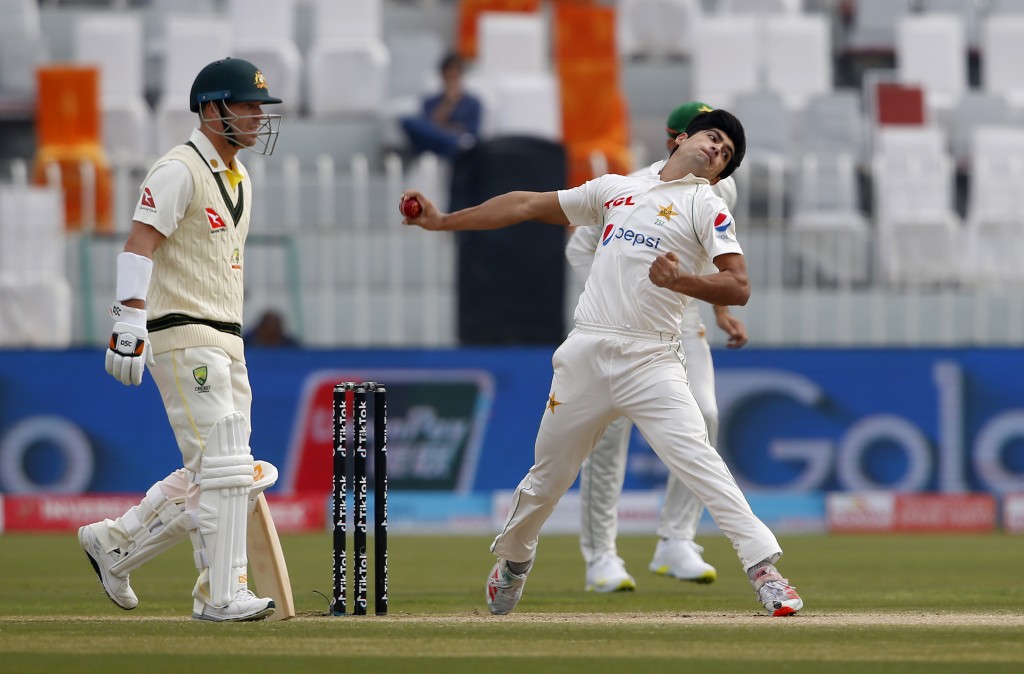 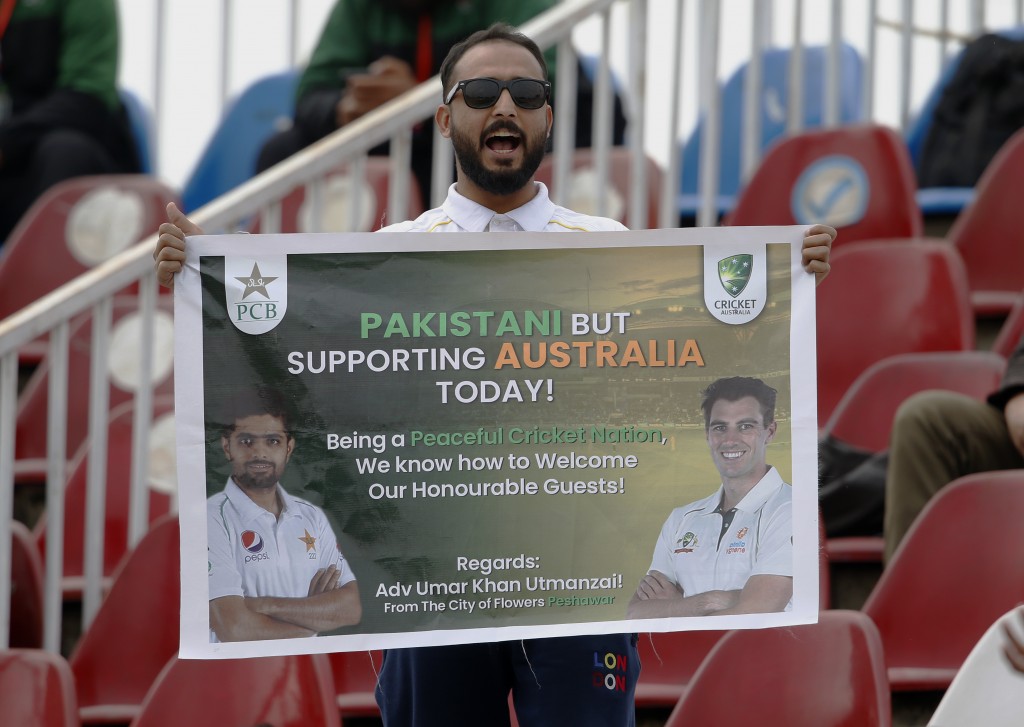 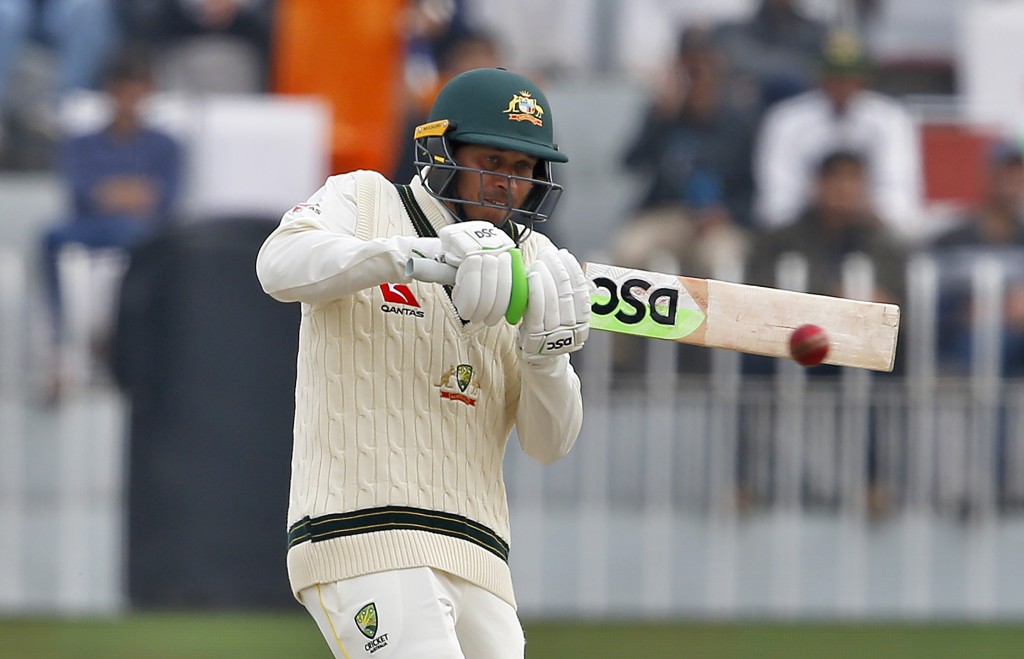 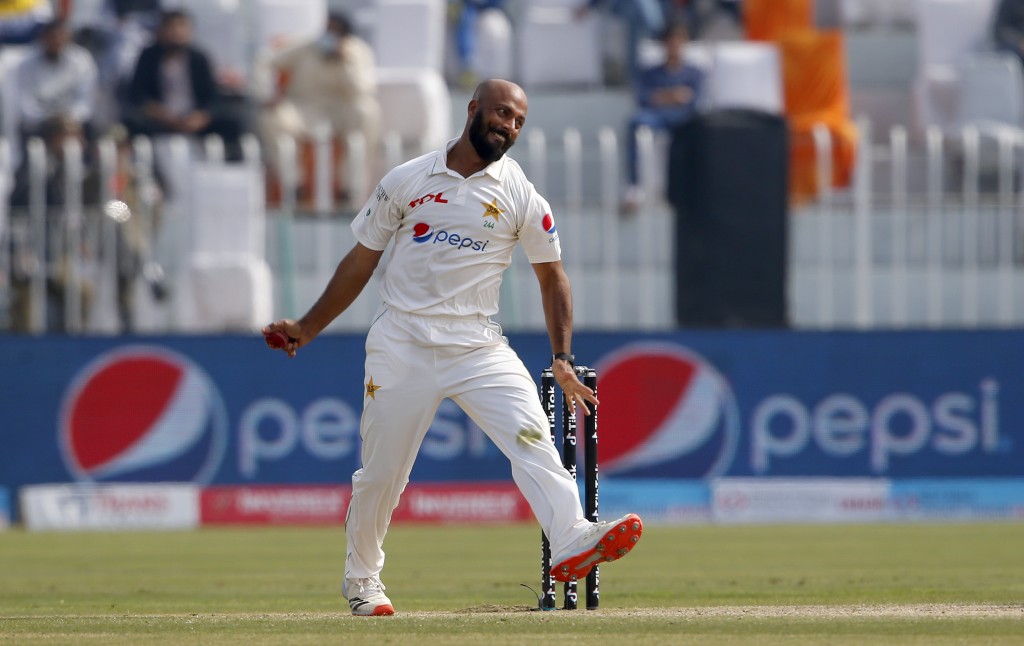 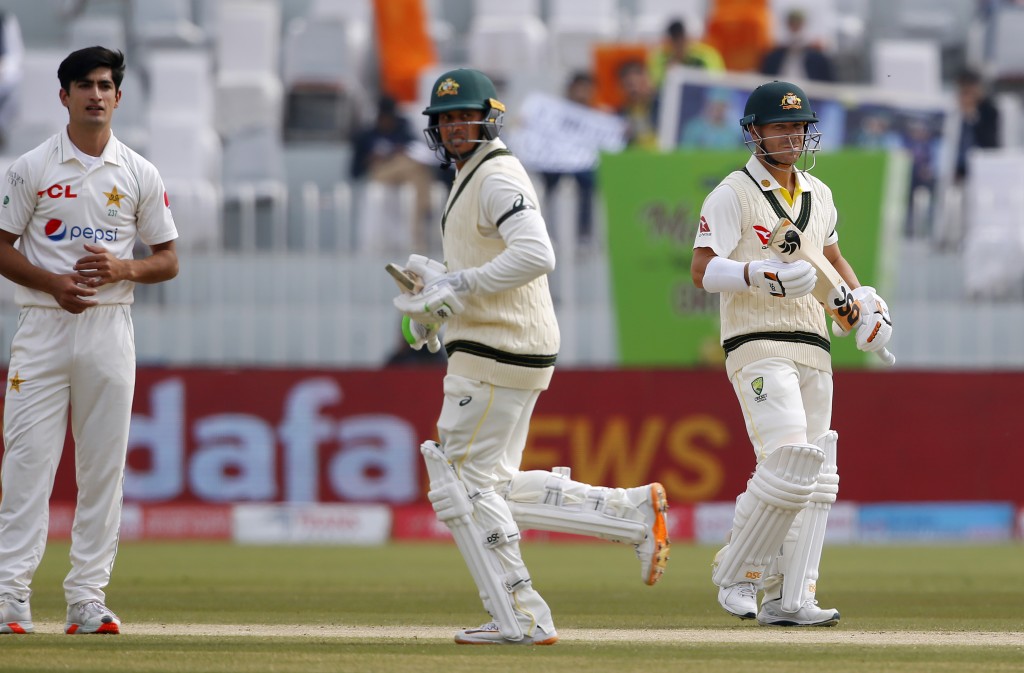 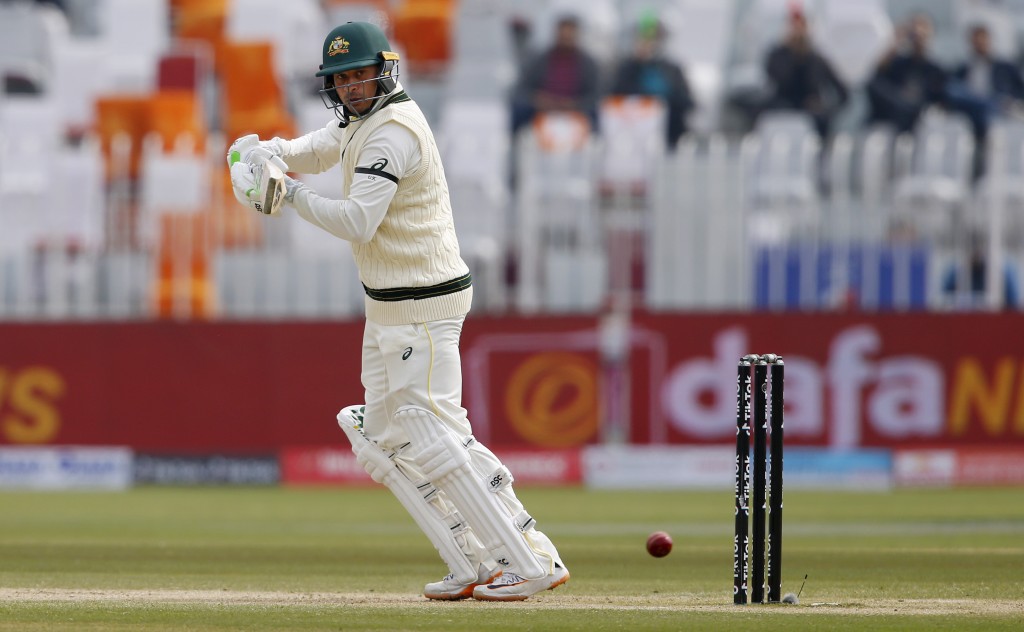 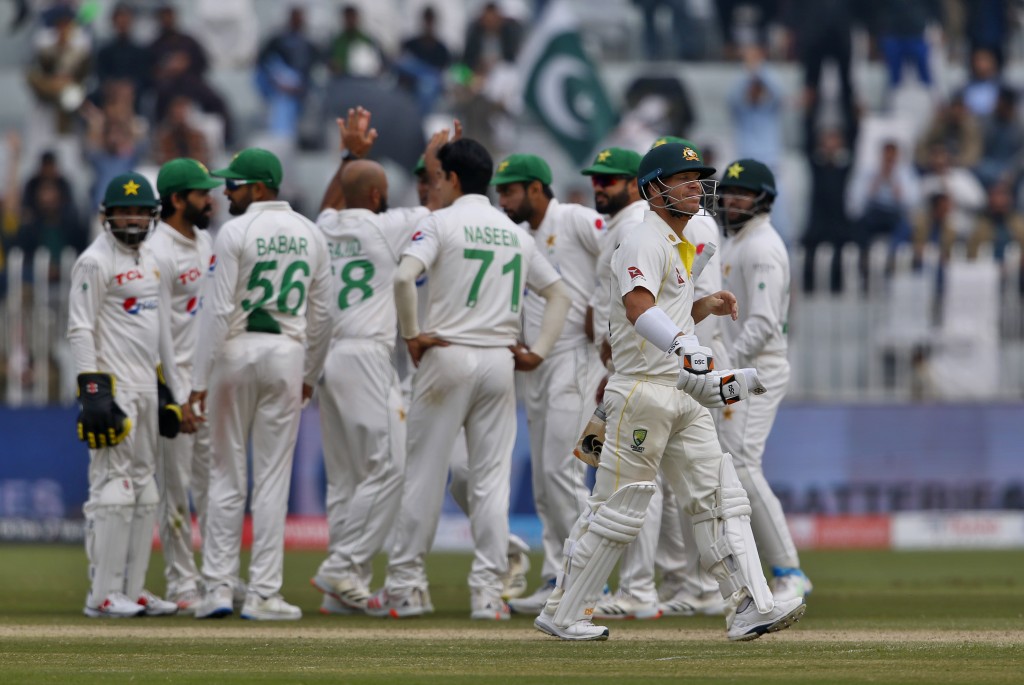 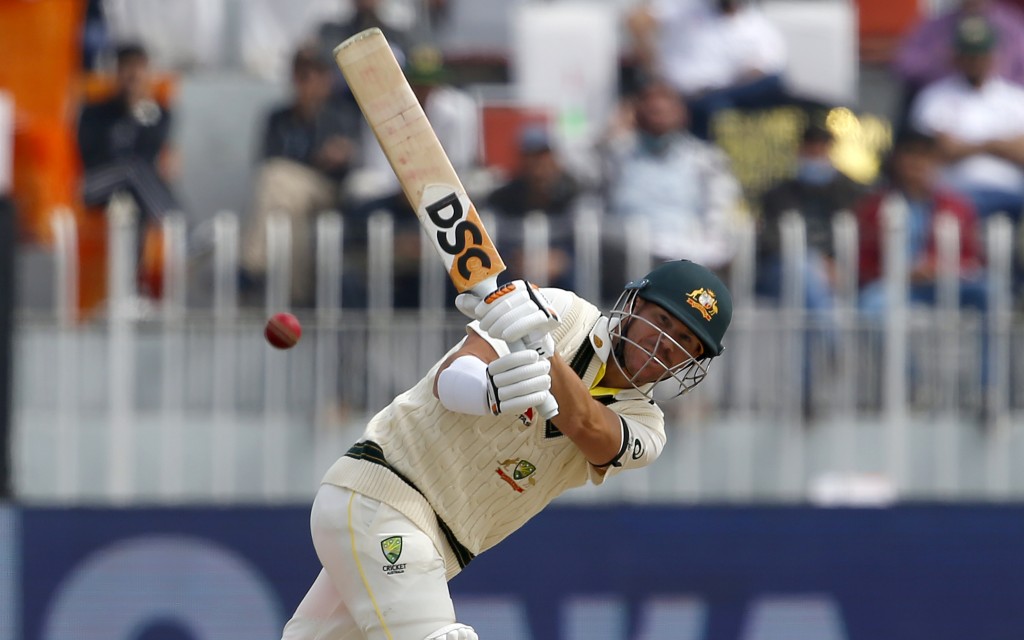 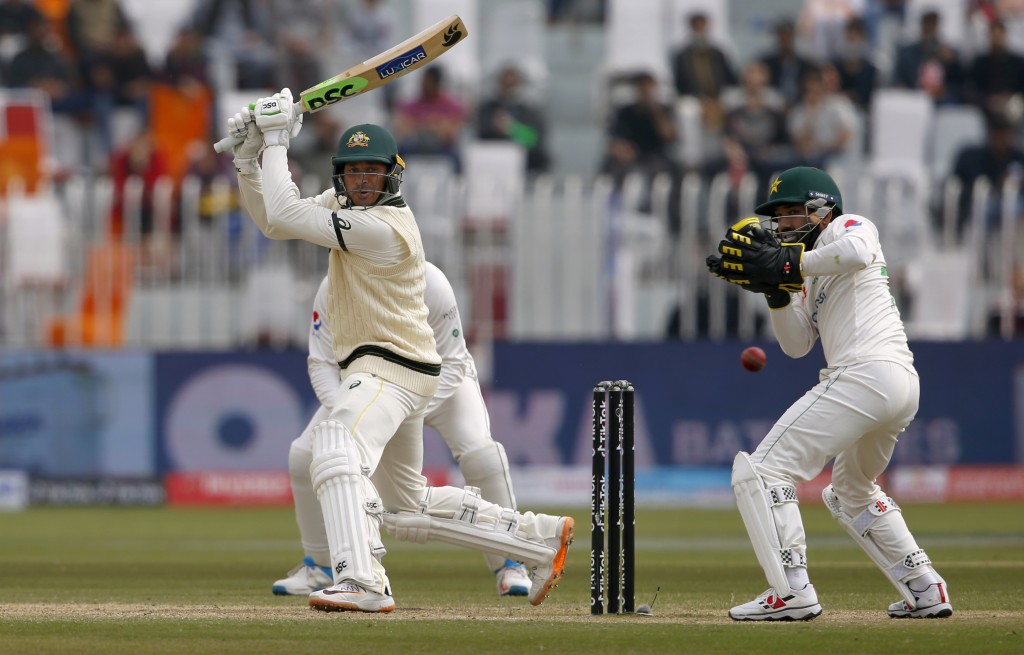 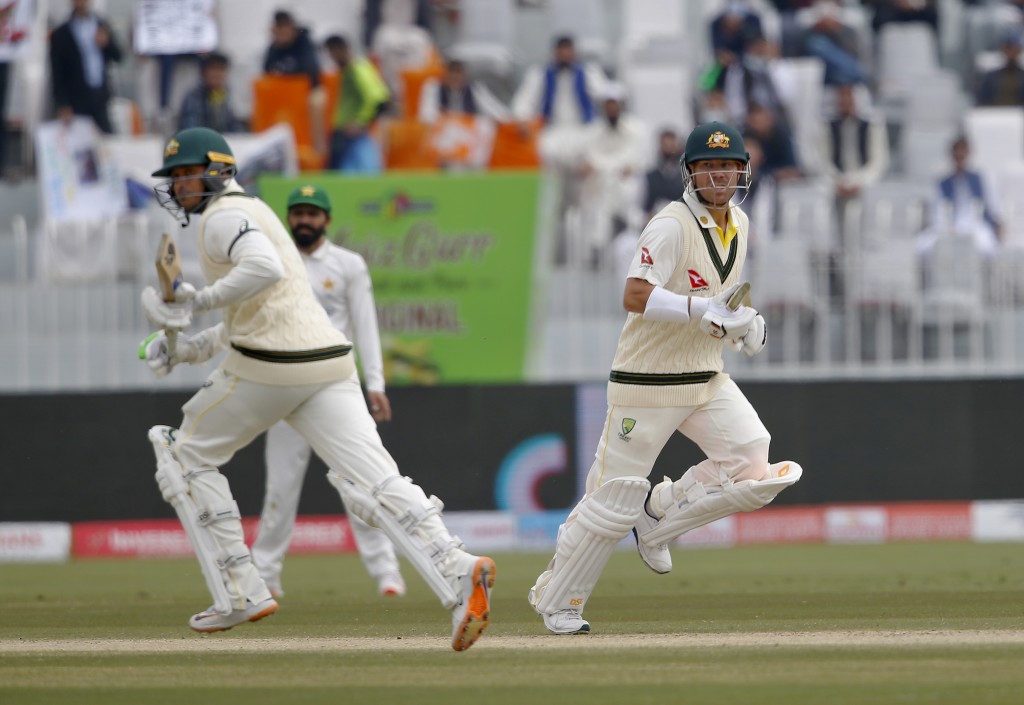 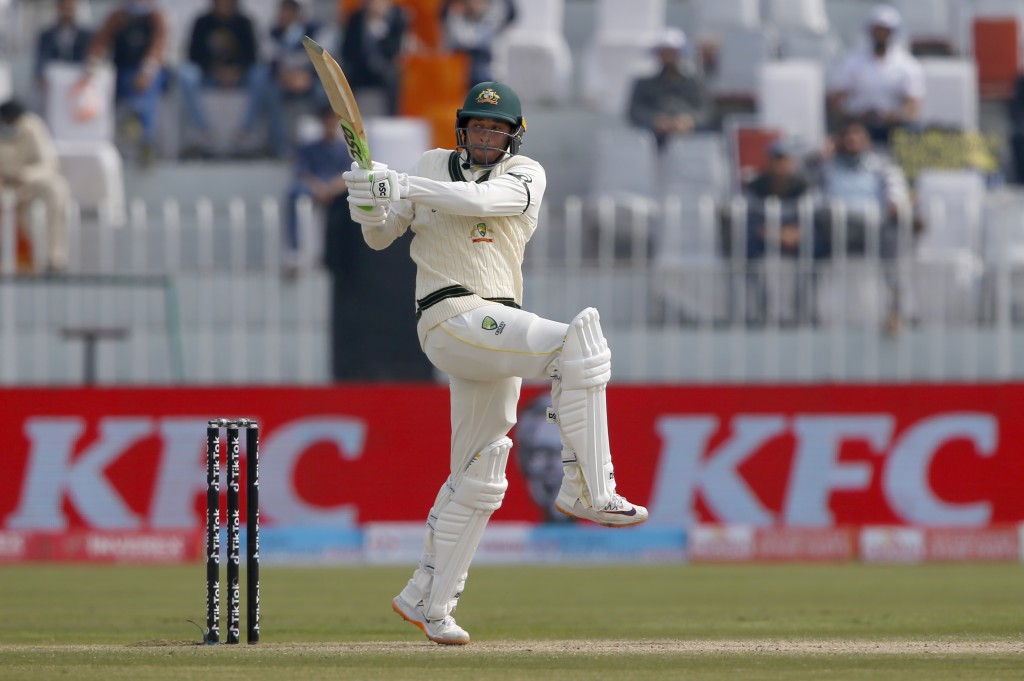 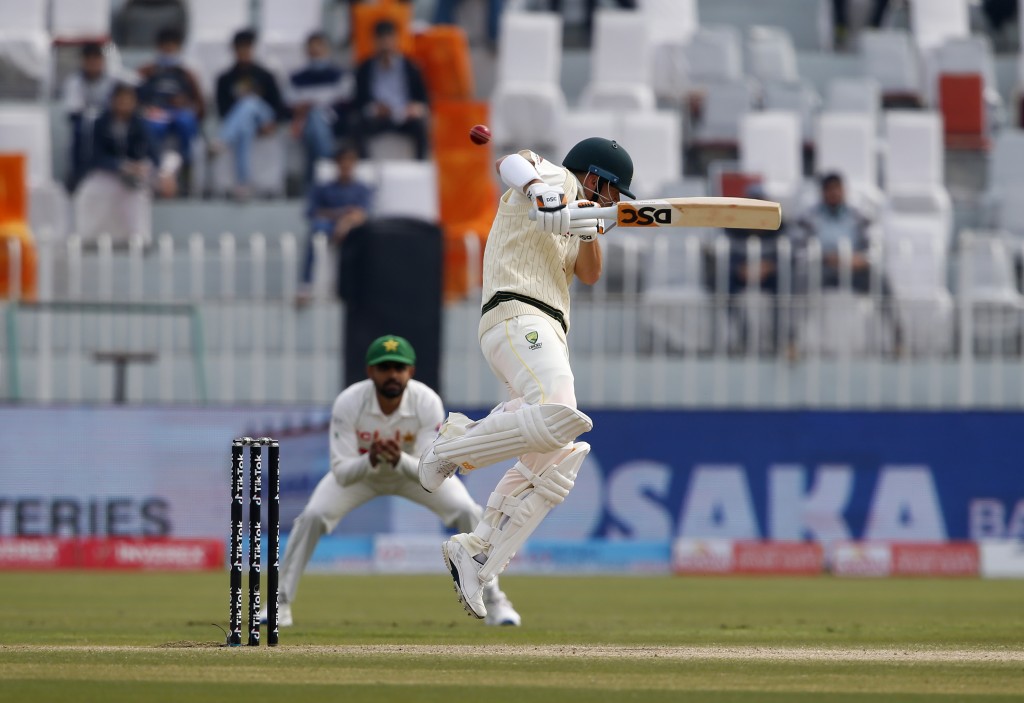 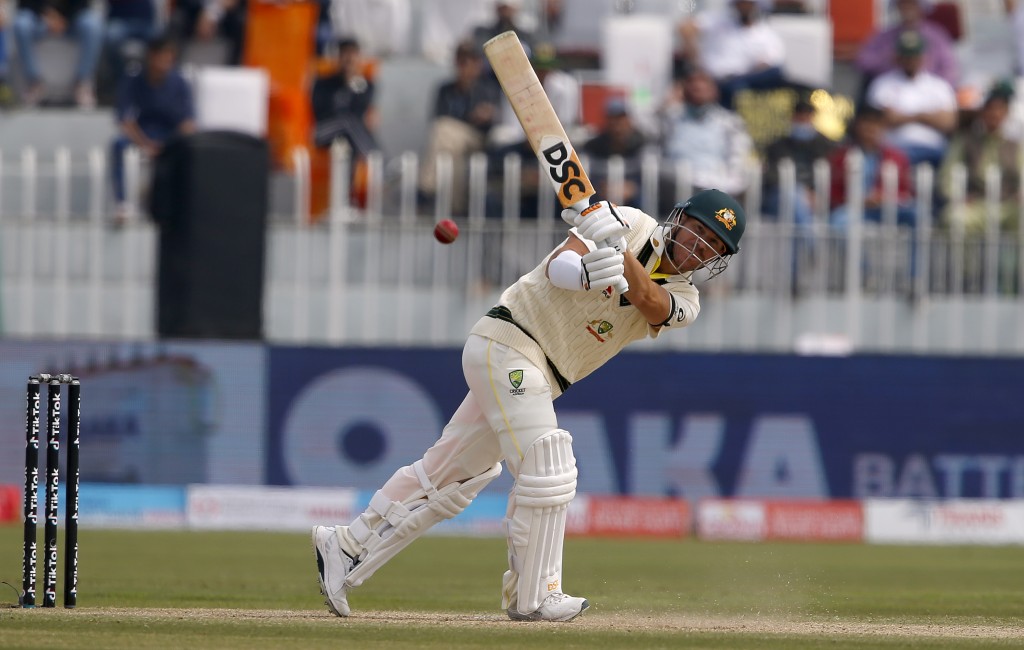 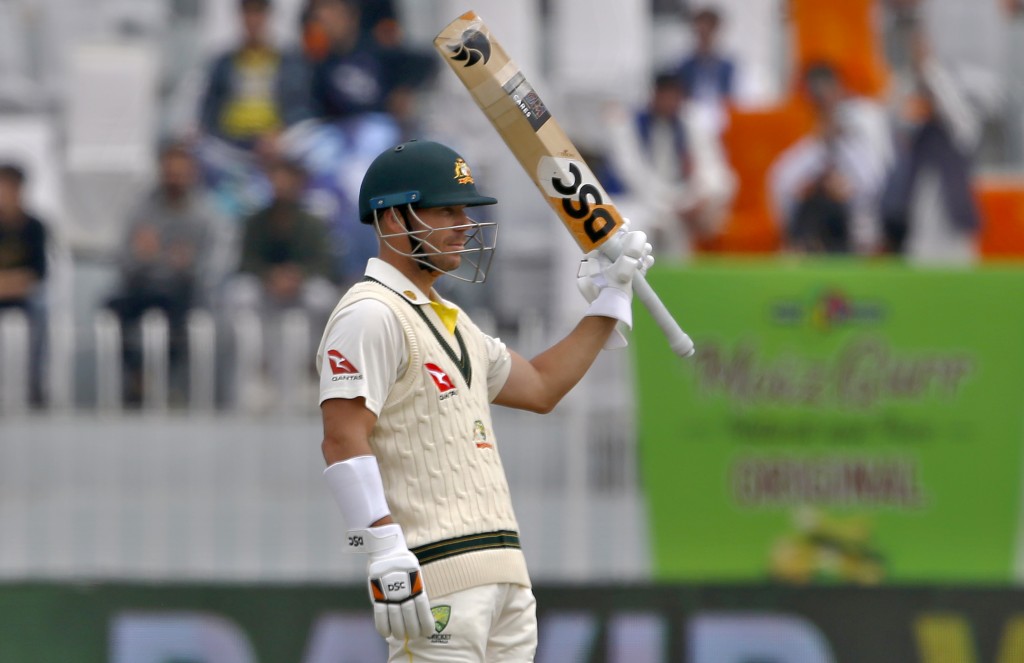 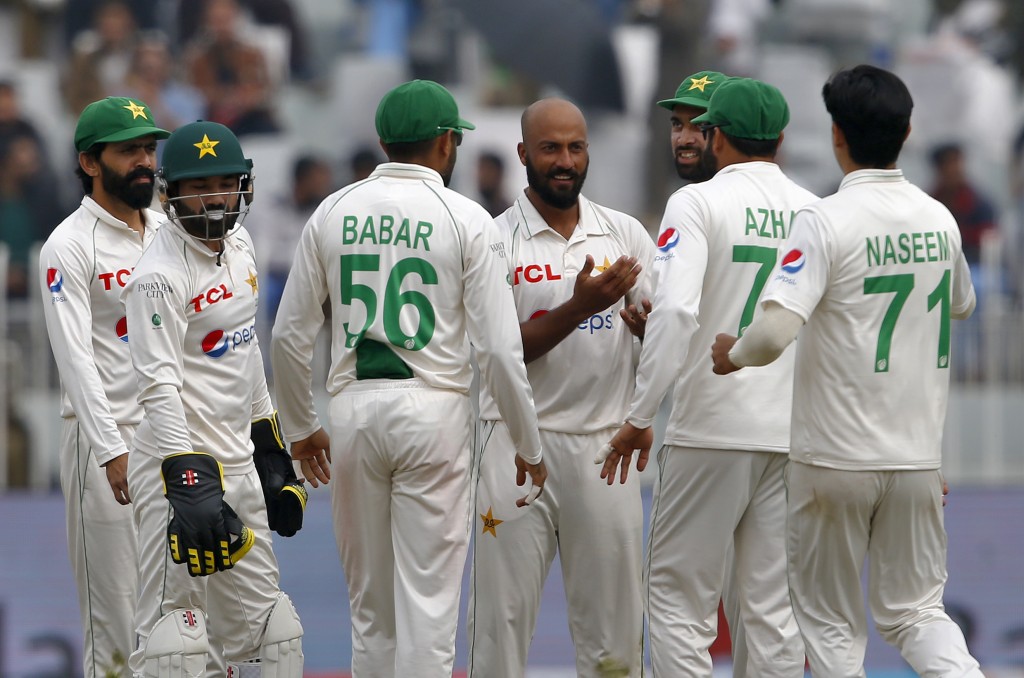 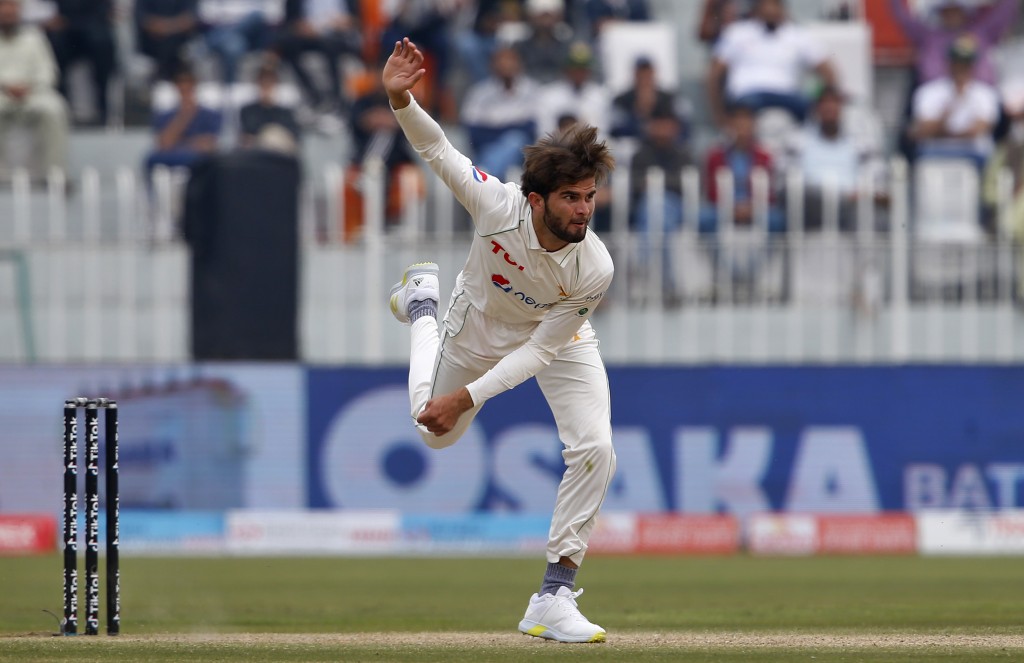 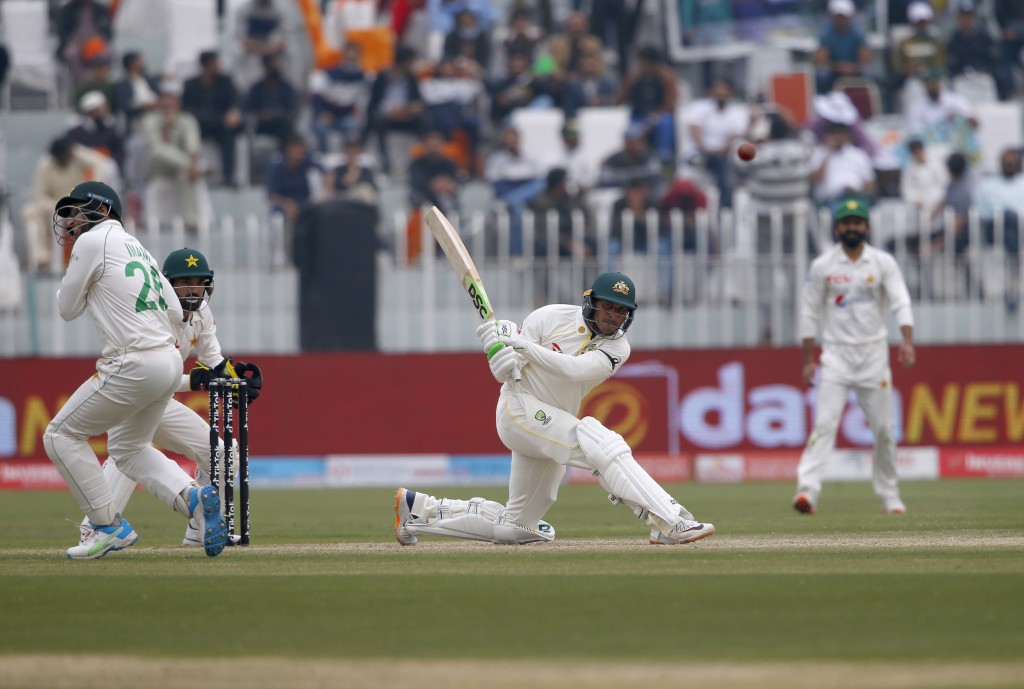 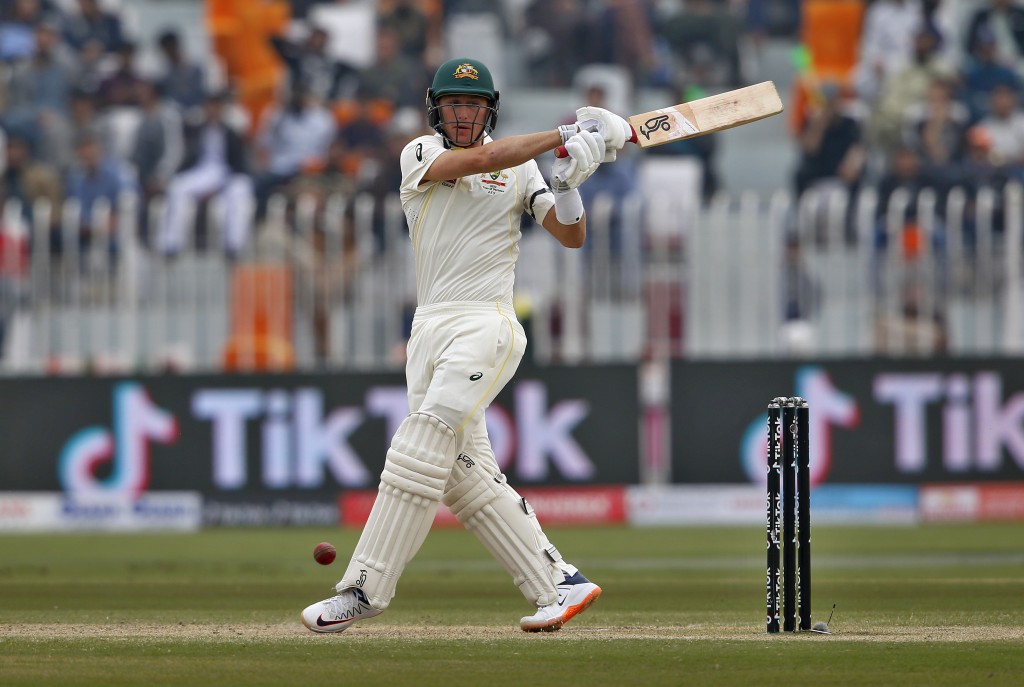 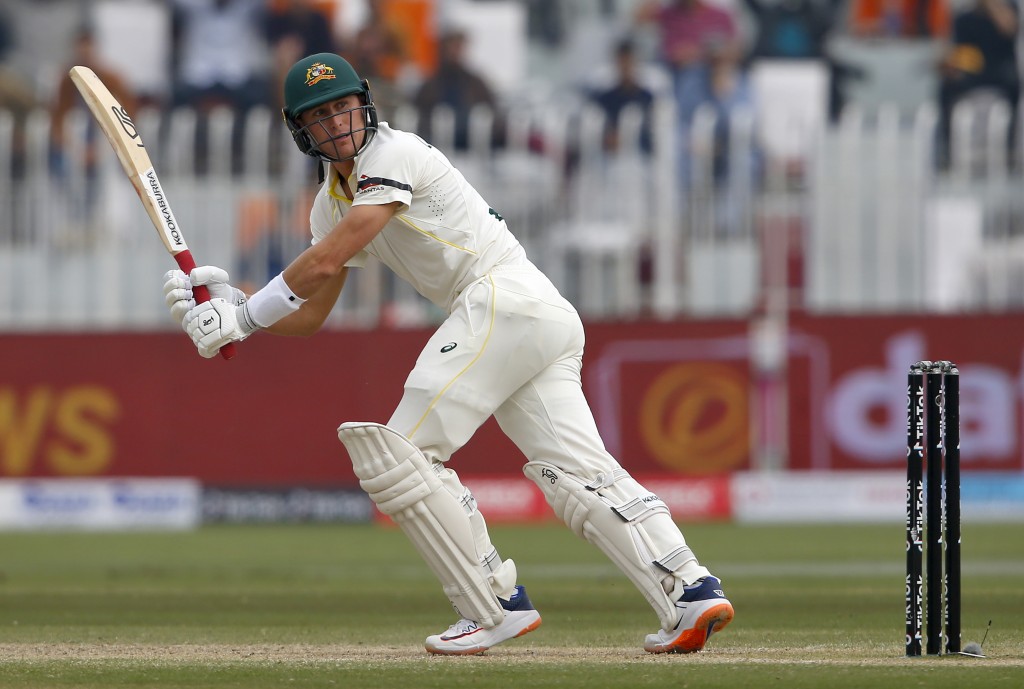 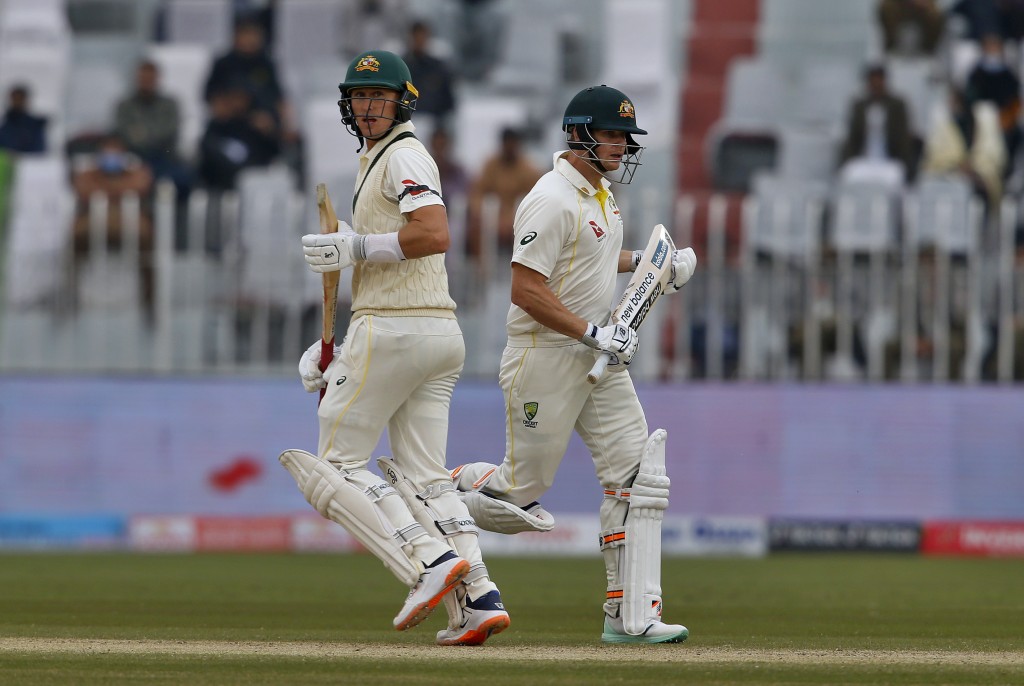 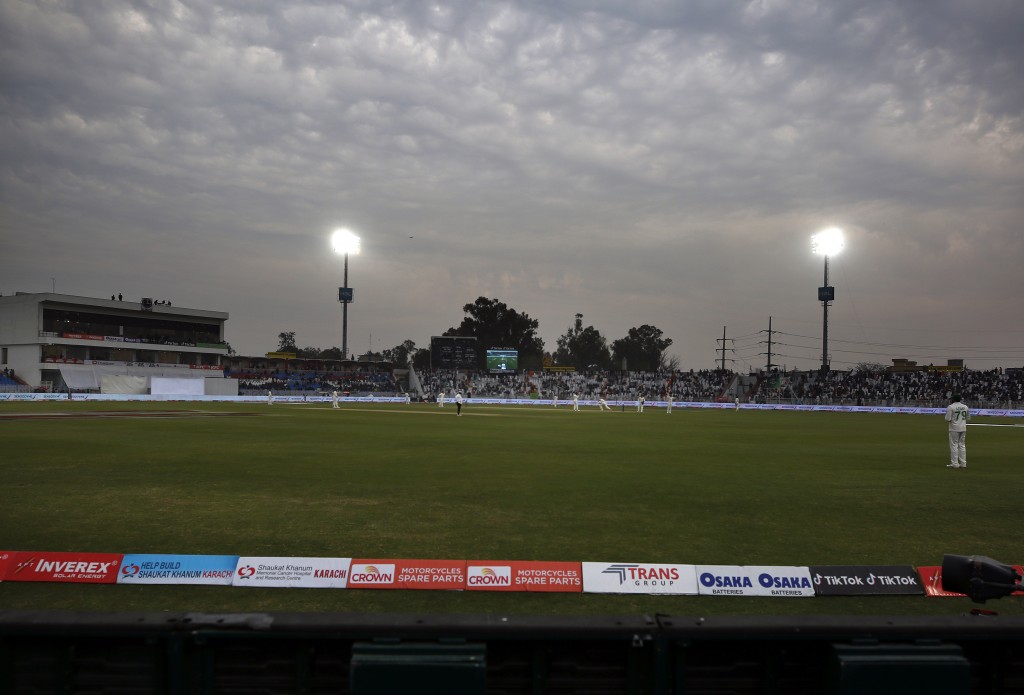 RAWALPINDI, Pakistan (AP) — Usman Khawaja narrowly missed out on a century in the country of his birth as Australia's top batters made full use of a placid wicket to reach 271-2 on the third day of the first test against Pakistan on Sunday.

Khawaja, whose family migrated to Australia when he was four, capitalized on two dropped catches to score 97 while his opening partner David Warner (68) and Marnus Labuschagne (69 not out) also scored aggressive half centuries.

“It's a bit disappointing, I would have loved the 100 out here in Rawalpindi-Islamabad where I grew up and have heard about it a lot from my family,” said Khawaja.

“I was having a lot of fun. I was enjoying playing and when you put it in perspective, I wasn’t even in the Australian team a few months ago, so I’m very grateful to be here and happy that I contributed to the team in the end.”

Bad light and heavy clouds brought an early closure to the third day’s play, 21 overs ahead of schedule as Australia batters prospered on a grassless wicket.

Australia still trails by 205 runs in its first test in Pakistan in 24 years after the home team had declared at 476-4 late on the second day.

Labuschagne, who hit nine boundaries, raised his half century under overcast conditions in a shortened last session and vice-captain Steve Smith was not out on 24 when umpires took the players off the field.

The flat wicket has not changed to give any assistance to the bowlers over the last three days with batters continuing their domination in all nine sessions.

Pakistan’s only productive period with the ball came when its spinners claimed the wickets of Khawaja and Warner in the second session.

Khawaja had escaped a second chance when on 62 with wicketkeeper Mohammad Rizwan unable to grab a sharp chance off a reverse sweep against left-arm spinner Nauman Ali (1-49).

However, he attempted the same extravagant shot again against Nauman and was caught close to the wicket when Pakistan successfully called for a television review against onfield umpire Aleem Dar’s not out decision. Replays suggested Khawaja had gloved the ball as it ballooned to Imam-ul-Haq at short leg.

Khawaja’s entertaining knock lasted just over three and a half hours and came off 159 balls featuring 15 boundaries as Australia scored at a rate of 3.71 run per over on Day 3.

Warner exchanged pleasant smiles with Pakistan fast bowlers Shaheen Afridi and Naseem Shah, who tested the left-hander with some short pitched deliveries, but the left-hander exerted his authority with some exquisite drives on both sides of the wicket.

Warner hit 12 boundaries before he was clean bowled by offspinner Sajid Khan (1-94) from a delivery that skidded off the pitch as the left-hander tried to cut off the backfoot and missed the line of the ball.

Earlier, resuming on 5-0, both Australian left-handed openers were untroubled by the early pace of Afridi and Naseem and didn’t let the two specialist spinners — Sajid and Nauman — get settled. The duo smashed 23 boundaries in the first session when Pakistan bowled 32 overs.

Pakistan came close to dismissing Khawaja on 22, but Fawad Alam dropped a simple chance at gully in Afridi’s fifth over. Khawaja added insult to injury by taking three consecutive boundaries against the left-arm fast bowler.

Khawaja raised his fifty off 67 balls with eight fours while Warner raised his fifty from 86 deliveries with nine boundaries after he smashed offspinner Iftikhar Ahmed for three in his first over.