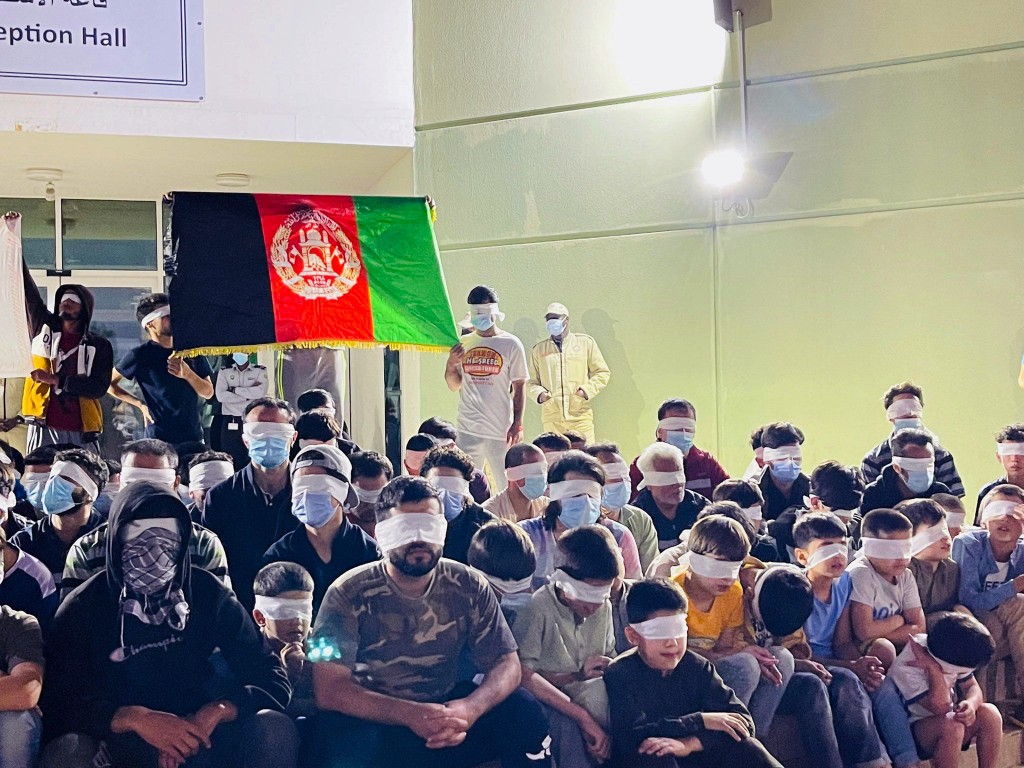 The diplomat spoke to the stranded Afghans on Friday, promising to speed repatriation for some to America while acknowledging that may not be possible as authorities work to confirm their identities and backgrounds.

The visit comes as America still struggles with how to handle the tens of thousands who piled into planes in the hectic final days of Afghanistan’s U.S.-backed government, the end of a 20-year experiment in replacing hard-line Taliban rule with a nascent democracy.

After meeting with the Afghans, the diplomat and other officials spoke to journalists on the condition they not be identified, citing the “sensitive and ongoing natures of the issues discussed.”

The diplomat apologized about the delays and expressed personal frustration about them. But the official also acknowledged that some of the Afghans -- including journalists and prosecutors – might never get U.S. visas.

Thousands of Afghans have held protests over their uncertain situation.

“The problem is nobody knows what’s going on,” said Ahmad Shah Mohibi, the founder of a group called Rise to Peace, which has been trying to help Afghans there. “The U.S. has a moral obligation” to help them.

Around 12,000 Afghans remain in Abu Dhabi, with some 10,000 at Emirates Humanitarian City and another 2,000 at Tasameem Workers City in the capital, Mohibi said. They represent a cross-section of those who fled the Taliban’s lightning advance in August, including journalists, judges, prosecutors, LGBT rights activists and religious and ethnic minorities, he said.

Eight American citizens, as well as three permanent residents, also remain in the housing as they don’t want to leave their family members who do not have U.S. visas, Mohibi said. The U.S. officials did not dispute the figures or the descriptions offered by Mohibi.

Among those in Abu Dhabi are former soldiers who identify themselves as belonging to so-called “Zero” Units. There are about 2,500 of them, including family members.

“Zero” Units — or “Counterterrorism Pursuit Teams” as the Americans called them — had been organized and run by the CIA in the long war against the Taliban. They conducted what Human Rights Watch described as “abusive” nighttime raids that involved extrajudicial killings and airstrikes that sowed anger in Afghanistan.

However, the “Zero” Units served as a bulwark as American and allied forces mounted their chaotic evacuations from Kabul International Airport ahead of the final U.S. withdrawal on Aug. 30.

In a statement to The Associated Press, the CIA denied the abuse allegations against the units, saying it takes extraordinary measures to reduce civilian casualties and hold its partners accountable. “A false narrative exists about these forces that has persisted over the years due to a systematic propaganda campaign by the Taliban,” it said.

The CIA statement said it recognizes its obligation to its partners continues and it is working “to enable as smooth a transition as possible for these brave Afghans and their families.”

Evacuation flights had been going on until November, but then suddenly stopped, leaving the thousands stranded in Abu Dhabi. There are tens of thousands more still stuck in Afghanistan.

The senior U.S. official also said that two measles outbreaks among the refugees, concerns over coronavirus vaccinations and later, CDC demands for full medical examinations had slowed down the process of getting Afghans to the U.S.

The official also stressed the UAE controls the two sites in Abu Dhabi and that a full survey of those here still has not been finished.

“Frankly, the Emiratis have been generous,” Mohibi said. “The problem is the U.S. government is making the UAE look bad. They offered a hand to help ... (but now the U.S.) are not helping their ally take the Afghans out.”

An earlier version of this story incorrectly said the CIA did not immediately respond to a request for comment. The CIA had not received the request until after that version was published.