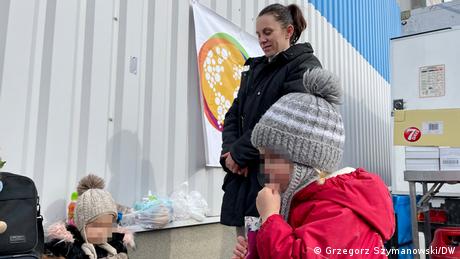 "Look, mom! There's something flying in the sky," 6-year-old Sofia exclaimed when she saw her first missile. It was the first day of the war and they were already on the run: Yulia Rezhova and her two daughters fled the village of Gorenka, north of Kyiv, and avoided the routes taken by Russian soldiers rushing toward Ukraine's capital.

"I would stay, if not for my daughters," the 30-year-old said. She wanted to remain in Ukraine, like her sister and brother, trying to organize and support others. But now she is in Poland.

Hundreds of thousands have fled Ukraine since the war began on February 24. The longer the war goes on, the larger this number will grow. The EU expects that up to 4 million people might try to leave the country because of the Russian attack.

Most flee to Poland

More than half of the refugees, about 380,000 people, have so far fled to Poland like Yulia Rezhova. She waits with her daughters in the parking lot of the refugee reception center in Korczowa, a few kilometers from the Ukrainian-Polish border.

The Polish government has opened 27 such facilities. Korczowa is a junction for those arriving by bus via the nearby border crossing. When they get off, they are given food and toiletries by volunteers. From here, they attempt to journey further. In the large warehouse, there are also about 2,000 camp beds set up. According to a police officer, about 700 people have been staying there overnight, but nobody knows the exact number. The refugees come and go.

Rezhova does not want to stay in the refugee facility. She is waiting for a friend to pick her and her daughters up and take them to the Czech Republic, where her husband currently works.

Foreign refugees in a tricky situation

The people who stay longer in the hall are mostly unsure what their next move will be. Like Raju Bhandari, a 29-year-old from Nepal who had started his engineering studies in Kyiv only two months ago. He speaks softly, with a shy smile.

At the border he had to stay put for two days, he said, because Ukrainian border guards held him back. "I always have a lot of respect for foreigners, why didn't they have any for me?" He has had no problems on the Polish side of the border, he said.

Many foreign nationals are holding outin the warehouse: Students from India, Angola, or Uzbekistan, along with migrant workers from Central Asian countries. The International Organization for Migration estimates that about 470,000 foreigners were living in Ukraine, about 75,000 of them are students. These people are also fleeing the country. Polish daily newspaper Dziennik Gazeta Prawna reports that, according to Poland's border patrol, about 10% of the refugees are third-country nationals — in other words, they do not hold a passport of an EU member state.

But while many Ukrainians have contacts in Poland (even before the war about 1.5 million lived in the neighboring state), the country is an unknown for the other refugees. Bhandari, who is waiting on a camp bed for a money transfer from his parents in Nepal, is unsure where he should go next: "Can I study here in Poland?" Bhandari likes how willing the Poles have been to help, but for people like him, those without a Ukrainian passport, the prospect of staying is unclear.

Waiting at the entrance to the warehouse hall are those who have a destination but are unsure how to get there. Here, the refugees are looking for volunteer drivers or buses that can take them to other cities in Poland. Volunteers, soldiers, and firefighters attempt to help organize such requests. Calls of "Krakow with an overnight stay, two seats," or "Bus to Wroclaw," ring out over the loudspeakers.

Teenage Ukrainian Andriy Chornoguz has two destinations in mind. The 17-year-old wants to go to Italy, where his parents live and work. But he is a minor and has no passport, so he will not be able to fly to them. "My parents told me I should come to Poland, and we will see what happens from here," he said.

His journey from Kyiv with a family acquaintance took five days. "Difficult, very difficult," he said with sadness in his voice. He is waiting on a ride to Warsaw, where his uncle lives.

Many return to their home countries

The beds deep in the corridors of the reception center are occupied by migrant workers from Central Asia. They came to Ukraine to earn money, such as Murat from Kyrgyzstan who had most recently been working as a car painter in Odesa. "The flights for myself, my wife, and two daughters cost about €1,800 ($1,900), where should I get that money from?" He had not been paid recently. "The embassy said I had to sort out the trip on my own."

But for others, there is suddenly some hope between the rows of beds. Staff from the consulate of Uzbekistan have set up a mobile office and are booking plane tickets to the country. A small group of men stands off to the side, weighing whether they would rather stay if they are allowed to work legally.

The European Union now wants to grant the Ukrainian refugees protection for up to three years and issue them work permits. However, when the migrant workers hear from their consulate staff that this is not an option for nationals of other countries, they decide they would travel home. The Polish border control has announced that it will work with foreign embassies to organize repatriation flights for third-country nationals.

Returning home is also at the front of Yulia Ryzkhowa's mind, the Ukrainian woman who is fleeing to the Czech Republic with her children. Although she does not know when — or if — this will be possible, she seems to have made her decision: "I absolutely want to go back, without a doubt. Because it is our country."

While you're here: DW editors round up what is happening in Germany and the world in various newsletters. You can sign up here.