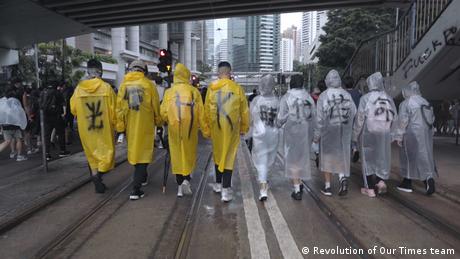 For some Hong Kongers, the monthslong anti-extradition bill protests may already feel like something from a distant past.

But Hong Kongers living in Taiwan were recently reminded of the emotions associated with the protests after the island began to run a documentary film in dozens of movie theaters on February 25.

"I hope audiences can appreciate the film without a fixed political stance or a lot of stereotypes," said Kiwi Chow, the director of the film, in a recorded message to the public in Taiwan.

The film, whose name is derived from the second half of a now-banned slogan in Hong Kong, chronicles the monthslong protests that transformed the semi-autonomous city.

It documents how the initial protests against a proposed extradition bill that could potentially allow residents in Hong Kong to be tried in Chinese courts evolved into mass demonstrations against police brutality and the government's failure to fulfil its promises.

It was reportedly filmed and directed by a group of anonymous filmmakers in a collaborative fashion.

In an interview with DW last December, Chow described the experience in 2019 as "a collective trauma" for all Hong Kong people.

He said since the Chinese government imposed the controversial national security law (NSL) on Hong Kong, people no longer have outlets to go through those traumas.

"Someone once thanked me for making the film, because he said it reminded him that his experiences in the 2019 protest were real," Chow said. "I think one thing this film can achieve is to witness and preserve history, especially after we realized that certain histories in Hong Kong may not survive after the NSL came into force."

The film captured several episodes of fierce clashes between protesters and Hong Kong police, including the storming of the legislative council, the Yuen Long attack on July 21, the Prince Edward MTR station attack on August 31, and the siege of the Hong Kong Polytechnic University.

Some Hong Kongers in Taiwan, who took part in some of the protests, said their immediate reaction after watching the film was "fury," as they were reminded of the police's often violent treatment of protesters throughout the monthslong protests.

"I thought I was going to be crying a lot but I think right after the movie began, I was very angry the whole time," said Kacey Wong, an exiled Hong Kong artist in Taiwan.

"The movie vividly reminded me how crazy it was back then. One scene was the Yuen Long attack, where local villagers and alleged triad members wearing white shirts attacked protesters and citizens. But during the press conference, the police claimed no one was carrying any weapons on that night," he added.

Jennifer Lu, an LGBTQ rights activist from Taiwan who used to travel frequently to Hong Kong, described the experience of watching the film as "painful."

As she had personally been to many of the places featured in the film, the scenes reminded her of her friends in Hong Kong.

"It's really sad, but I also think that while it was painful for me to watch the film, my friends in Hong Kong actually have to go through such things," she told DW.

"The only thing I can do is to watch the film and share my thoughts with the general public in Taiwan. To some extent, I'm worried that Hong Kongers in Taiwan might be traumatized when they watch the film. On the other hand, I think they might want more people to know what happened in Hong Kong," she added.

Transformation of the protests

Apart from the emotional elements, Wong thinks the film also captures how Hong Kong's civil society deployed various tactics in response to the often brutal responses from the police and government authorities.

"This film clearly documented how the police basically abused their rights and how the people tried every peaceful means all the way to the martial means of resistance," he said.

Throughout the course of the movement, the Hong Kong police and government often described protesters as "rioters" and accused them of paralyzing the city.

During a New Year address in 2019, Hong Kong's Chief Executive Carrie Lam said the protests brought "sadness, anxiety, disappointment and even rage" to the city.

Months after that address, China's National People's Congress, the country's rubber-stamp parliament, adopted the National Security Law that was imposed on Hong Kong in July 2020.

Since then, more than 160 people have been arrested under national security charges, while some of Hong Kong's largest pro-democracy media outlets were forced to shut down.

To prevent the film from being targeted by the NSL, Chow sold the film's copyright to overseas interests before its premiere at last year's Cannes Film Festival.

"For the older generation of Taiwanese, who have lived through the martial-law era, they feel that there is a connection between the Hong Kong experience and their personal experiences," she told DW.

"As for the younger generation, I think the film offers an important reminder that Taiwan went through similar experiences in the past, and it's not impossible for Taiwan to return to that kind of governance model. It shows us how we should protect Taiwan's democracy," she said.

Lam Wing-kee, the owner of the prominent Causeway Bay Books store in Taiwan, says Hong Kongers should look to the future.

"I think we should avoid sticking to the same feeling that we felt in 2019, and think about what Hong Kong people can do in the future," Lam told DW.

"It is possible for us to rebuild Hong Kong in other places like Taiwan, the United Kingdom and Canada. If Hong Kongers from different walks of life gather in one place, we can still bring back Hong Kong's culture. What's important is Hong Kong people, not the location," he said.

Director Chow says that while many people have urged him to leave Hong Kong due to concern for his safety, he feels quite safe in the city.