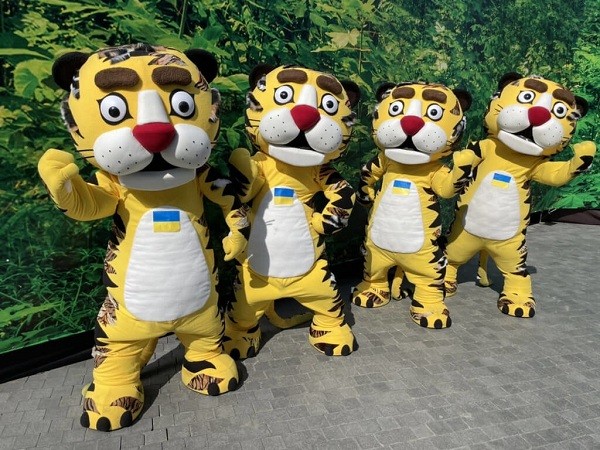 TAIPEI (Taiwan News) — Members of Paper Windmill Theatre (紙風車劇團) wore tiger suits and Ukraine’s national flag at a parade on the square at Kaohsiung's Weiwuying Sunday (Feb. 27) to show their support as the country defends itself amid Russia’s invasion.

Paper Windmill Theatre founder Lee Yung-feng (李永豐) said that he hopes the show of support can bring peace and blessings to Ukrainian children suffering from fear and the threat of war, CNA reported.

Lee said innocent children are especially impacted during wartime. Paper Windmill Theatre knows how sensitive children are, he said, as the group has been performing for children across the country for decades.

“We all have children, and we feel for them, knowing how wars can cause them extreme fear and damage their bodies and minds,” Lee said. “We can’t do much, but (we) hope such performances that are full of positive energy can bring comfort to these children far away.”

The troupe also staged the regular Cutesy Tiger Parade on the square. On Sunday, members wore the Ukrainian flag on their costumes to show their support for the country as it faces a Russian invasion.

“When we see Ukrainian children say they don’t want to die on television and look at what the weather is like now, the fact that they have to hide in bunkers or basements is really unbearable,” Paper Windmill Theatre leader Jen Chien-cheng (任建誠) said. “Paper Windmill can’t do much. All we can do is show our heart.”