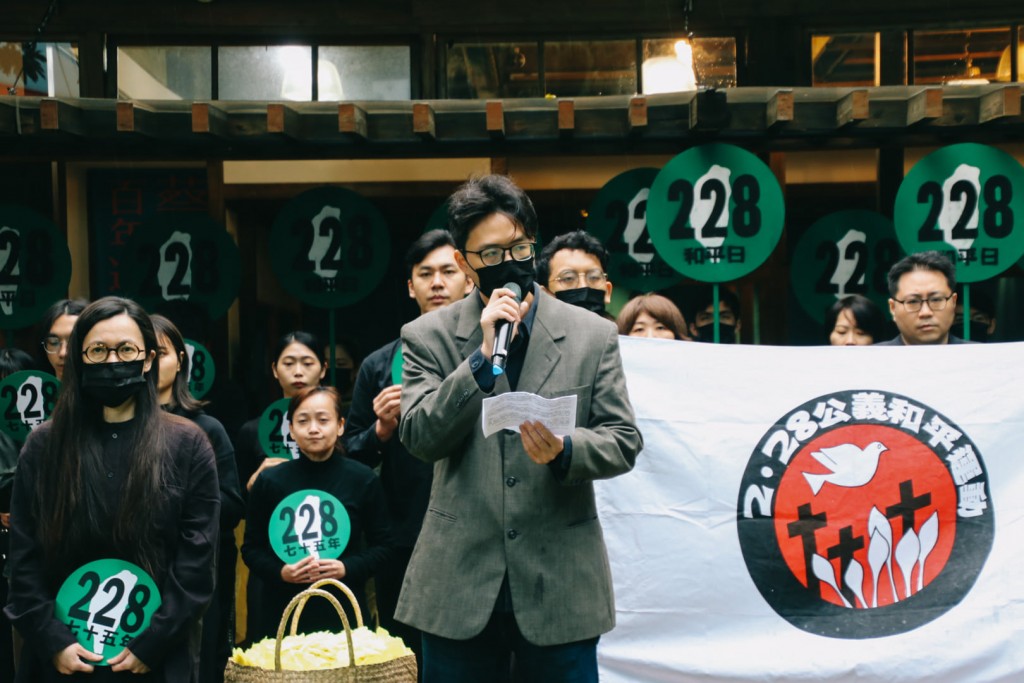 TAIPEI (Taiwan News) — More than 50 civil groups, including the Nylon Cheng Liberty Foundation, held a parade to commemorate the 75th anniversary of the 228 Massacre on Monday (Feb. 28).

The parade was part of the sixth “228.0 Commemorative Operation," which focuses on demolishing the vestiges of Taiwan's martial law period and building a new country. Participants started at the Tianma Tea House, where an officer from the Taiwan Tobacco and Wine Monopoly shot a civilian on Feb. 27, 1947, passed by the Taipei Monopoly Bureau building and Taipei 228 Memorial Hall (formerly the Taipei Broadcasting Station), and stopped at the Cabinet building, CNA reported.

Political activist and lawyer Li Sheng-hsiung (李勝雄) and Lin Tsung-heng (林宗正), a pastor, laid roses at the Tianma Teahouse in honor of those who died during the violence that followed the shooting. A commemorative ceremony was later held in front of the Cabinet.

Afterward, a group recited poems in sign language, which symbolized the silenced voices of the victims and their families.

The organizers called on the government to find out the truth behind 228 and the ensuing White Terror and investigate the perpetrators. They also demanded that symbols of authoritarianism be removed, starting with those at Chiang Kai-shek Memorial Hall and the Cihu Mausoleum.

The organizers also urged the government to confront Chinese imperialism and create a new Taiwanese state.

The daughter of late democracy advocate Nylon Cheng, Cheng Chu-mei (鄭竹梅), said attendees had shown up for the sake of love, justice, and peace. She noted that the younger generation of Taiwanese is also participating in that type of event.

A number of Hongkongers also participated in the parade, per CNA.