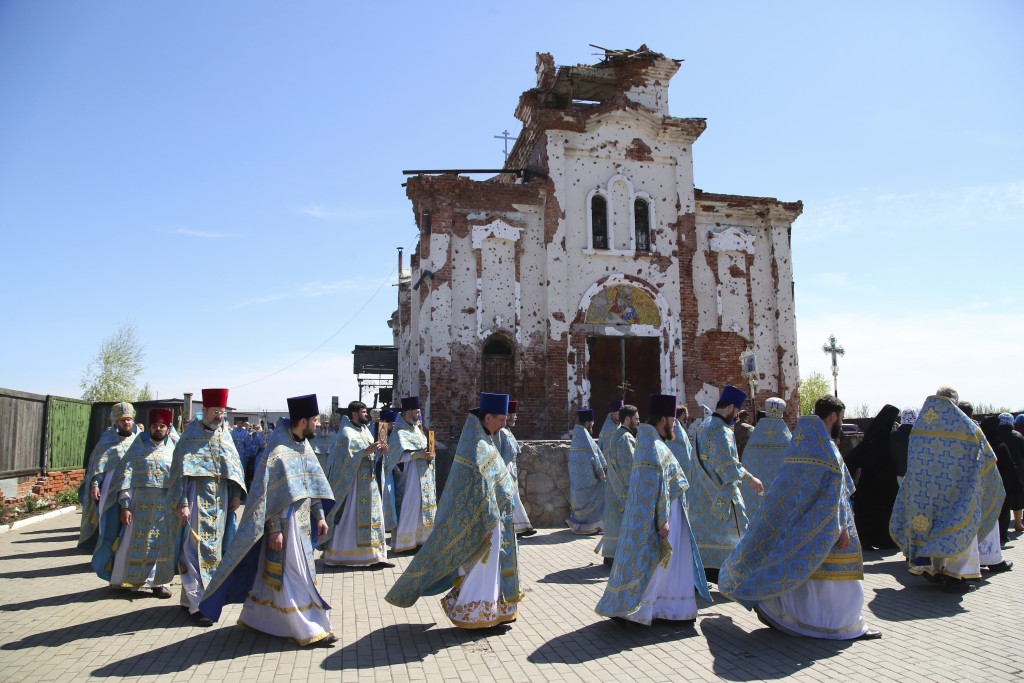 Ukraine’s tangled political history with Russia has its counterpart in the religious landscape, with Ukraine’s majority Orthodox Christian population divided between an independent-minded group based in Kyiv and another loyal to its patriarch in Moscow.

But while there have been appeals to religious nationalism in both Russia and Ukraine, religious loyalty doesn’t mirror political fealty amid Ukraine's fight for survival.

Even though Russian President Vladimir Putin justified his invasion of Ukraine in part as a defense of the Moscow-oriented Orthodox church, leaders of both Ukrainian Orthodox factions are fiercely denouncing the Russian invasion, as is Ukraine's significant Catholic minority.

“With prayer on our lips, with love for God, for Ukraine, for our neighbors, we fight against evil - and we will see victory," vowed Metropolitan Epifany, head of the Kyiv-based Orthodox Church of Ukraine.

“Forget mutual quarrels and misunderstandings and ... unite with love for God and our Motherland,” said Metropolitan Onufry, head of the Ukrainian Orthodox Church, which is under the Orthodox patriarch of Moscow but has broad autonomy.

Even that seemingly united front is complicated. A day after posting Onufry's message on Thursday, his church's website began publishing reports claiming its churches and people are being attacked, blaming one attack on the representatives of the rival church.

The division between Ukraine's Orthodox bodies has reverberated worldwide in recent years as Orthodox churches have struggled with how and whether to take sides. Some U.S. Orthodox hope they can put such conflicts aside and unite to try to end the war, while also fearing the war could exacerbate the split.

WHAT IS THE RELIGIOUS LANDSCAPE OF UKRAINE?

Surveys estimate a large majority of Ukraine’s population is Orthodox, with a significant minority of Ukrainian Catholics who worship with a Byzantine liturgy similar to that of the Orthodox but are loyal to the pope. The population includes smaller percentages of Protestants, Jews and Muslims.

Ukraine and Russia are divided by a common history, both religiously and politically.

They trace their ancestry to the medieval kingdom of Kievan Rus, whose 10th century Prince Vladimir (Volodymyr in Ukrainian) rejected paganism, was baptized in Crimea and adopted Orthodoxy as the official religion.

In 2014, Putin cited that history in justifying his seizure of Crimea, a land he called “sacred” to Russia.

While Putin says Russia is the true heir to Rus, Ukrainians say their modern state has a distinct pedigree and that Moscow didn't emerge as a power until centuries later.

That tension persists in Orthodox relations.

Orthodox churches have historically been organized along national lines, with patriarchs having autonomy in their territories while bound by a common faith. The Ecumenical Patriarch of Constantinople is considered first among equals but, unlike a Catholic pope, doesn't have universal jurisdiction.

That depends how to interpret events of more than 300 years ago.

With Russia growing in strength and the Constantinople church weakened under Ottoman rule, the Ecumenical Patriarch in 1686 delegated to the Patriarch of Moscow the authority to ordain the metropolitan (top bishop) of Kyiv.

The Russian Orthodox Church says that was a permanent transfer. The Ecumenical Patriarch says it was temporary.

For the past century, independent-minded Ukrainian Orthodox have formed separate churches which lacked formal recognition until 2019, when current Ecumenical Patriarch Bartholomew recognized the Orthodox Church of Ukraine as independent of the Moscow patriarch — who fiercely protested the move as illegitimate.

The situation in Ukraine was murkier on the ground.

Many monasteries and parishes remain under Moscow's patriarch, though exact statistics are difficult to find, said John Burgess, author of “Holy Rus’: The Rebirth of Orthodoxy in the New Russia.” On the village level, many people may not even know about their parish's alignment, Burgess said.

DOES THIS SCHISM REFLECT THE POLITICAL SPLIT BETWEEN THE TWO COUNTRIES?

Yes, though it's complicated.

Ukraine's former president, Petro Poroshenko, drew a direct link: “The independence of our church is part of our pro-European and pro-Ukrainian policies,” he said in 2018.

But current President Vladimir Zelinskyy, who is Jewish, has not put the same emphasis on religious nationalism. On Saturday, he said he had spoken to both Orthodox leaders as well as top Catholic, Muslim and Jewish representatives. “All leaders pray for the souls of the defenders who gave their lives for Ukraine and for our unity and victory. And that’s very important,” he said.

Putin has tried to capitalize on the issue.

In his Feb. 21 speech seeking to justify the imminent invasion of Ukraine with a distorted historical narrative, Putin claimed without proof that Kyiv was preparing for the “destruction” of the Ukrainian Orthodox Church of the Moscow Patriarchate.

But the reaction of the Metropolitan Onufry, who compared the war to the “sin of Cain,” the biblical character who murdered his brother, indicates that even the Moscow-oriented church has a strong sense of Ukrainian national identity.

By comparison, Moscow Patriarch Kirill has called for peace but has not laid blame for the invasion.

The Ukrainian Orthodox Church under the Moscow Patriarchate has long had extensive autonomy. Plus, it's increasingly Ukrainian in character.

“Regardless of church affiliation ... you have a lot of new clergy who grew up in independent Ukraine,” said Alexei Krindatch, national coordinator of the U.S. Census of Orthodox Christian Churches. “Their political preferences are not necessarily correlated with the formal jurisdictions of their parishes," said Krindatch, who grew up in the former Soviet Union.

WHERE DO THE CATHOLICS FIT IN?

Ukrainian Catholics are based mainly in western Ukraine.

They emerged in 1596 when some Orthodox Ukrainians, then under the rule of the Catholic-dominated Polish-Lithuanian Commonwealth, submitted to the authority of the pope under an agreement that allowed them to keep distinctive practices such as their Byzantine liturgy and married priests.

Orthodox leaders have long denounced such agreements as Catholic and foreign encroachment on their flocks.

Ukrainian Catholics have an especially strong history of resistance to persecution under czars and communists.

Recent popes have tried to thaw relations with the Russian Orthodox Church even while defending the rights of Ukrainian and other Eastern Rite Catholics.

But after the Russian invasion, Pope Francis visited the Russian Embassy on Friday to personally “express his concern about the war,” the Vatican said, in an extraordinary papal gesture that has no recent precedent.

HOW HAS THE ORTHODOX SCHISM REVERBERATED BEYOND UKRAINE?

The Russian Orthodox Church decided to “break the Eucharistic communion” with the Ecumenical Patriarch of Constantinople in 2018 as he moved to recognize an independent church in Ukraine. That means members of Moscow- and Constantinople-affiliated churches can't take communion at the other's churches.

The disputes have spread to Eastern Orthodox churches in Africa, where the Russian Orthodox have recognized a separate set of churches after Africa's patriarch recognized the Ukraine church's independence.

But many other churches have sought to avoid the fray. In the U.S., with multiple Orthodox jurisdictions, most groups still cooperate and worship with each other.

The war may provide a point of unity among U.S. churches but may further test relations, said the Very Rev. Alexander Rentel, chancellor of the Orthodox Church in America, which has Russian roots but is now independent of Moscow.

“This split that took place in world Orthodoxy was a difficult event for the Orthodox Church to process,” he said. “Now it’s only going to become more difficult because of this war."

Associated Press religion coverage receives support through the AP’s collaboration with The Conversation US, with funding from Lilly Endowment Inc. The AP is solely responsible for this content.