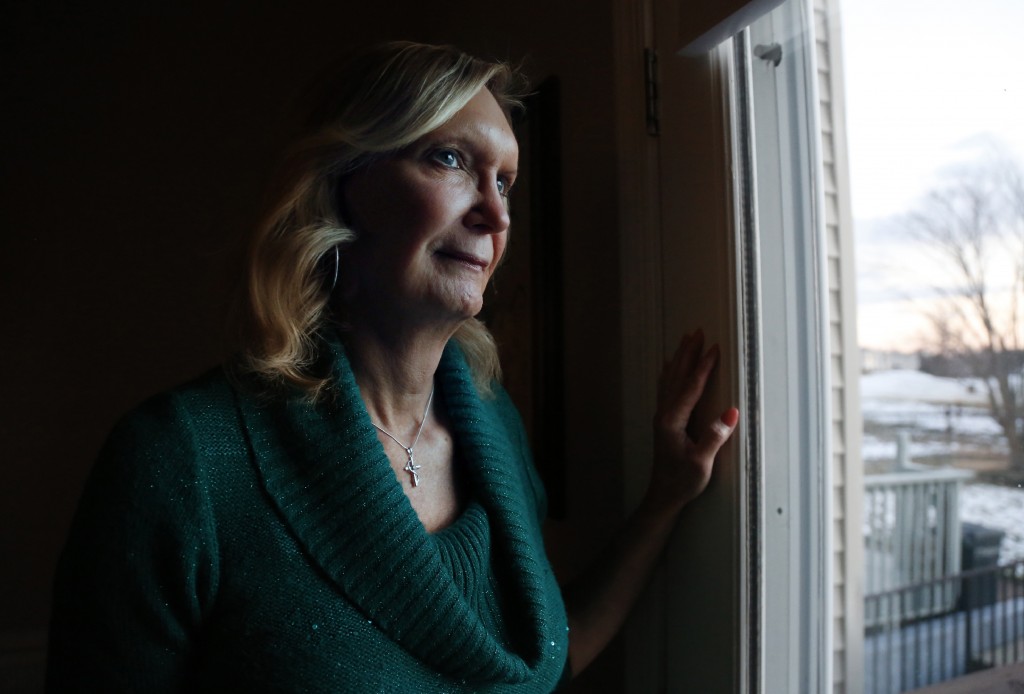 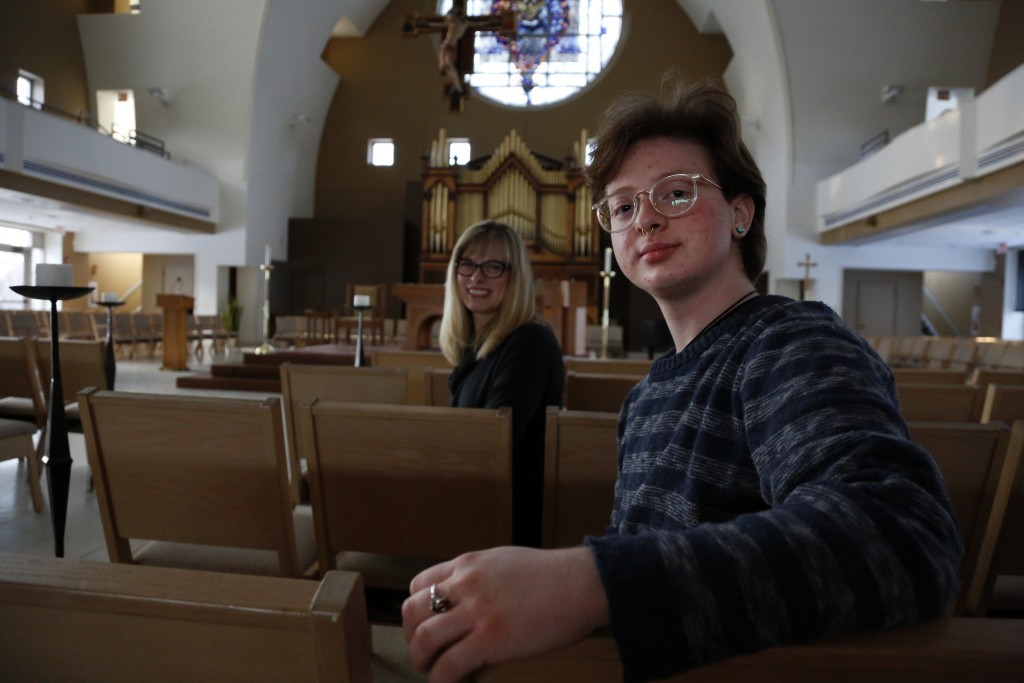 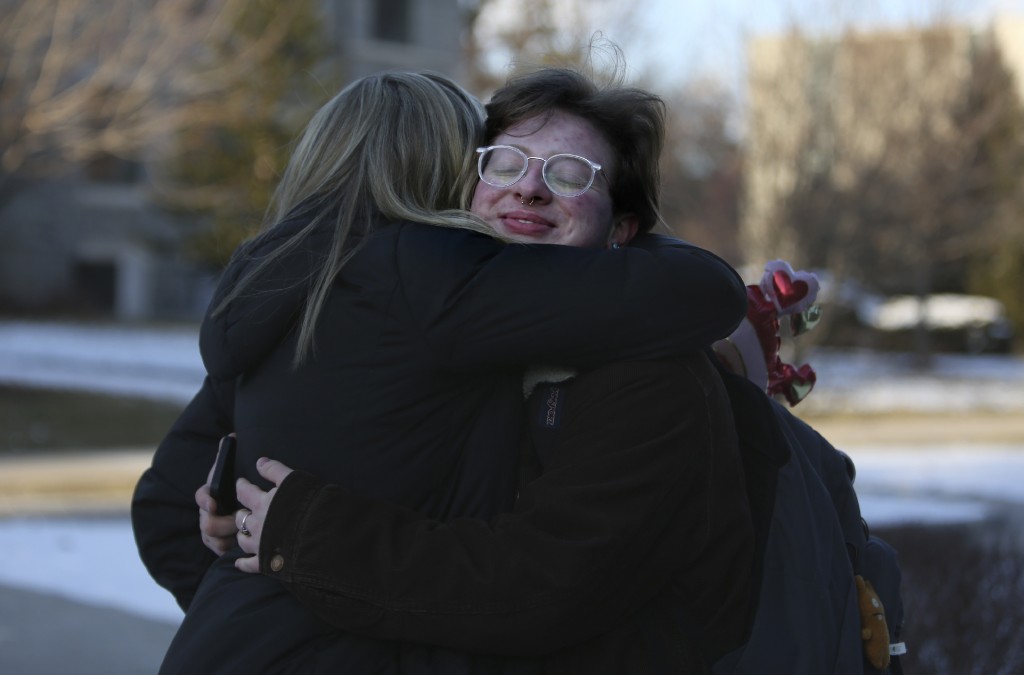 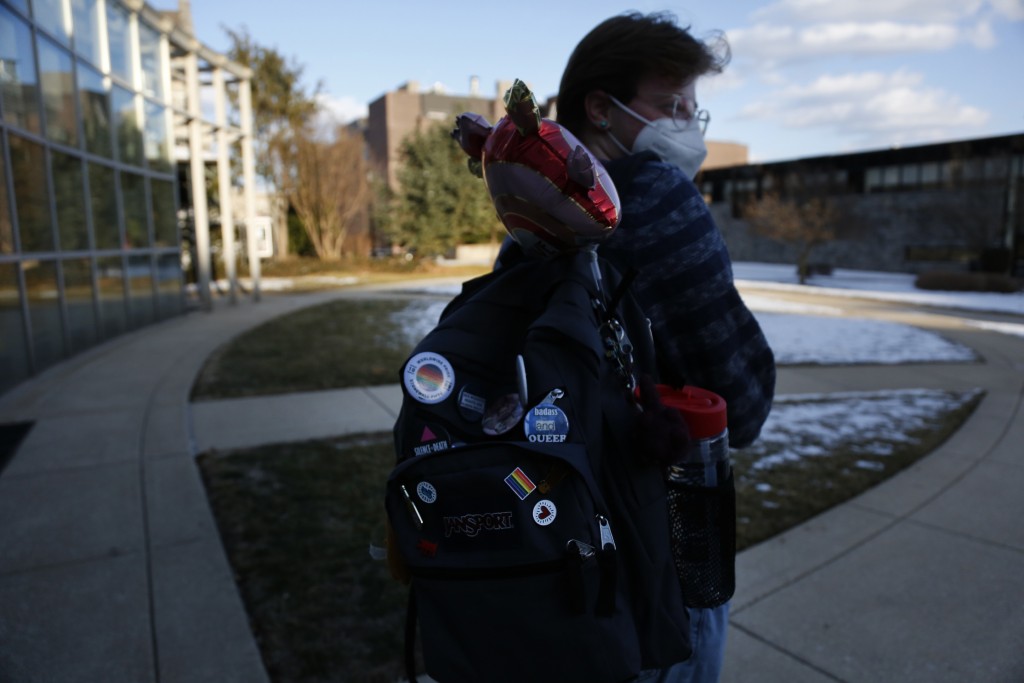 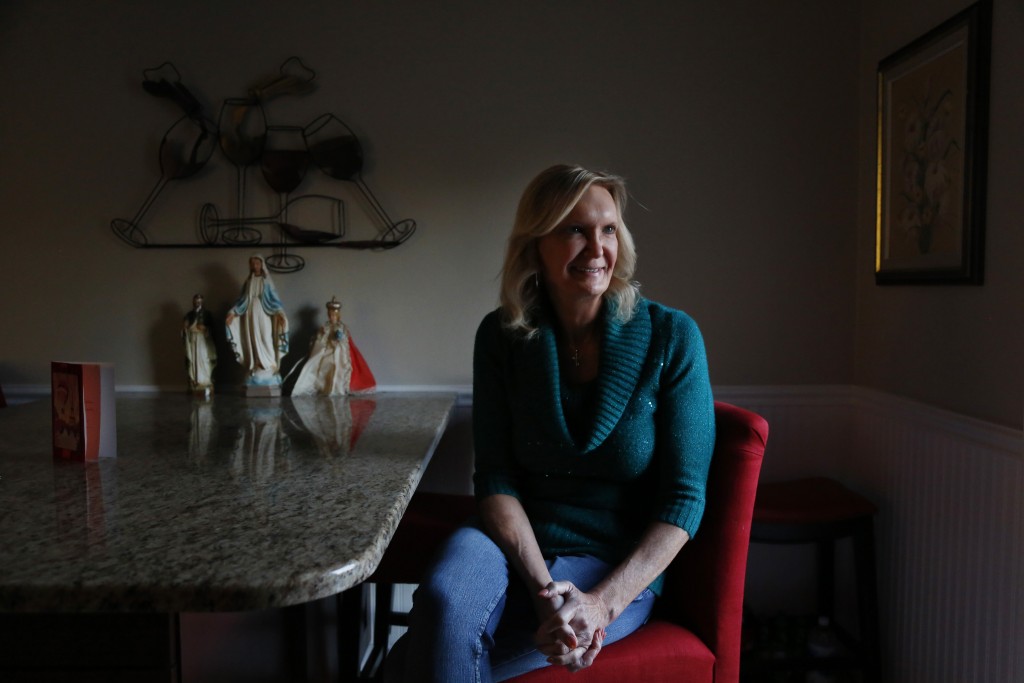 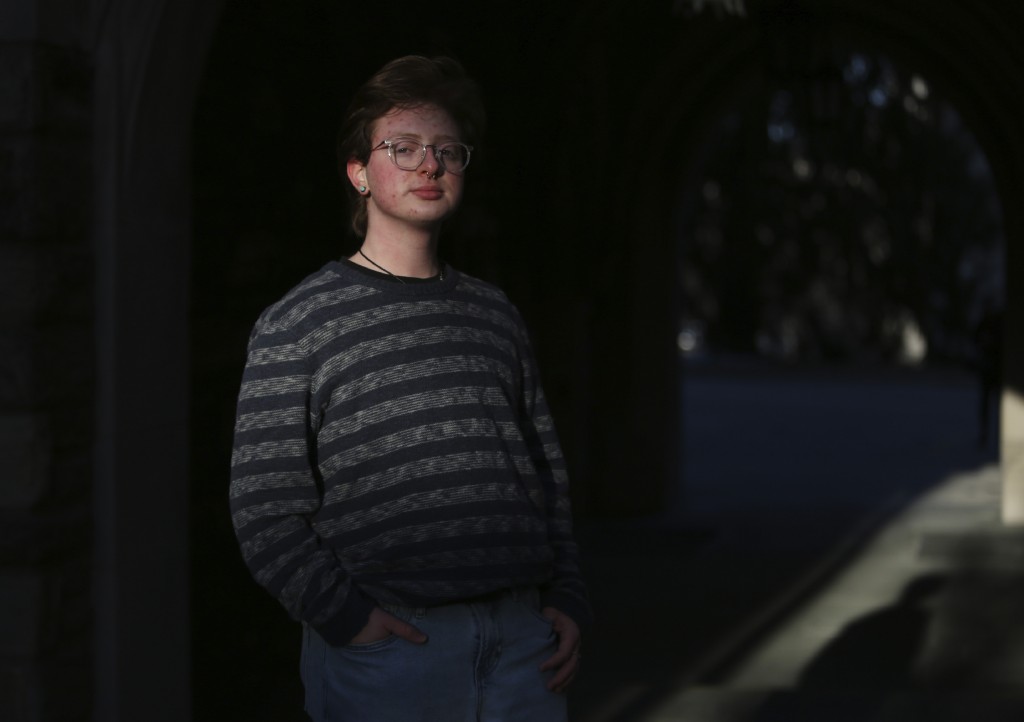 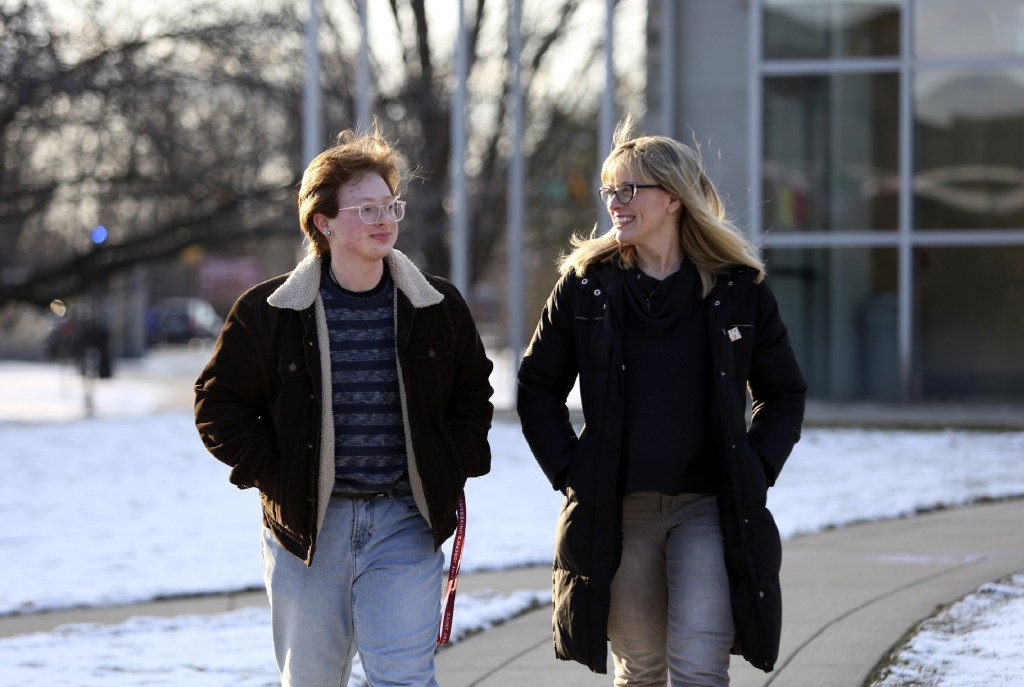 For transgender Catholics across the United States, retaining their faith can entail complex calculations. They face rebukes from some fellow Catholics, including many bishops, yet find full acceptance in some premises of the church.

A small but growing number of parishes have formed LGBTQ ministries or support groups and warmly welcome transgender people on their own terms. Yet within the past two years, at least six Catholic dioceses have issued guidelines targeting trans people with restrictions and refusing to recognize their gender identity.

“Many of our bishops are anti-science. ... They are cold and cruel,” said Sister Luisa Derouen, a retired nun who has ministered to transgender people. “You can’t respect people and deny their existence at the same time.”

The latest policy targeting trans Catholics was issued by the Archdiocese of Milwaukee in January. It bars church personnel from using trans people’s preferred pronouns that reflect their gender identity.

Objecting to trans-supportive “gender theory,” the policy stipulates that “all interactions and policies, parishes, organizations, and institutions are to recognize only a person’s biological sex.”

Among other measures, it says parishes, schools and other Catholic organizations in the archdiocese must require people to use bathrooms associated with their birth gender and adhere to dress codes on the same basis.

And a broader policy issued in July by the Diocese of Marquette, which encompasses Michigan’s Upper Peninsula, said pastors should deny trans, gay and nonbinary Catholics the sacraments — such as baptism and Communion — “unless the person has repented.” It was signed by Bishop John Doerfler.

But in some other parishes around the country, a different, more welcoming face of the church is on display.

Just a few weeks before the Marquette policy was issued, the Church of Our Lady of Grace in Hoboken, New Jersey, celebrated its annual Pride Mass in support of the LGBTQ community. Delivering part of the homily at the invitation of the priest, Alexander Santora, was Christine Zuba, a transgender woman from New Jersey.

“We are not disordered, confused or a fad,” Zuba said, sharing with other worshippers the decades-long journey that led her to come out six years earlier at age 58. “We are not trying to defy God, nor to play God.”

“By staying visible, not only outside these walls but inside our churches, we change hearts and minds, one person at a time,” she concluded. “Once in a while we may get thrown out, but if that happens, we’re not going away. We’re coming right back in.”

Santora, a priest for 40 years, said the other worshippers rose and applauded.

“Our church was opened in 1878,” Santora said. “I wanted Christine to be on that pulpit.”

A lifelong Catholic, Zuba said she knew from age 4 that she was different. When she finally decided to come out five decades later, she was grateful that a nearby parish, Saints Peter and Paul in Turnersville, New Jersey, welcomed her. She serves there as a eucharistic minister.

Yet she knows that much of the Catholic hierarchy, including the U.S. Conference of Catholic Bishops, rejects the concept of gender transition.

“These bishops and priests don’t understand that when they turn someone away, they’re losing parents, children, groups of friends who say this is not the church we want to belong to,” Zuba said.

Lynn Discenza, a 64-year-old transgender woman, grew up in a churchgoing Italian American family in West Hartford, Connecticut, and gave seminary a try before pursuing a career in aerospace design.

She considers herself fortunate, after transitioning two years ago, to be part of a welcoming Catholic church in the area — Saint Patrick-Saint Anthony Church in Hartford. She is a co-leader of its LGBTQ ministry.

Particularly moving, Discenza said, was a Nov. 21 observance marking the annual Transgender Day of Remembrance, which commemorates people killed due to anti-trans violence. She thanked the other worshippers for their support, and they responded with applause.

The pastor, Timothy Shreenan, highlighted the commemoration in the church bulletin.

“We must always stand up against hatred in all its forms, and not allow others’ fears (or phobias) to be a reason for hatred,” he wrote. “Rather, we must continue to learn more about the experience of others and to become more tolerant and accepting of one another.”

“The change is going to come from the ground up, and some of the old bishops will die away,” she said.

For young transgender Catholics, the conflicting approaches of individual churches and clergy can pose challenges to both them and their parents.

Eli Musselman of Philadelphia, who turns 19 in March and came out as transgender almost four years ago, said he felt a strong connection with his faith as a boy and many of his friends supported him.

But the pastor of the family’s longtime parish declined to refer to him with masculine pronouns and he had anxiety attacks in church due to some parishioners’ “nasty looks,” prompting the family to switch to a parish that made them feel at home.

“A place that had once been a safe haven for me had become a place of dangers,” said Musselman, now a freshman at the Jesuit-run St. Josephs University, where students and most professors, with one hurtful exception, have been supportive.

“But since coming out,” he added, “my spirituality has grown. ... I feel whole for the first time in my life.”

“I lost some really good friends,” said his mother, JoEllen Musselman. “I felt I was constantly making apologies to people, and I got tired of that.”

After embracing Catholicism as a convert after her marriage, she now has mixed feelings. Though determined to remain active in the church and advocate for greater inclusivity, she remains skeptical about the topmost Catholic leaders.

“They’re flawed,” she said. “If it wasn’t for Christ, the church would collapse, because we humans screw everything up.”

At the highest level of Catholic leadership, Pope Francis’ position can best be described as two-sided.

On one hand, he has personally ministered to trans Catholics, receiving them in the Vatican and encountering them as an archbishop in Argentina, and he has said the Catholic Church must accompany them. However, he has repeatedly denounced “gender theory” and what he calls the “ideological colonization” in some schools that teaches children they can change their biological sex at will.

Francis spoke at length on the issue during a 2016 press conference, stressing the need to avoid “gender ideology” but reasserting the need to minister to trans Catholics. “But please don’t say ‘The pope sanctifies trans!’ Please!"

Luisa Derouen, the retired nun who has ministered to more than 250 transgender people since 1999, received permission from her superiors in 2014 to write about that work. But that was on condition she not identify herself or her congregation, the Dominican Sisters of Peace. She did so under a pseudonym, which she ultimately abandoned in 2018 to publicly speak out on behalf of trans people and “give witness to their dignity and worth as human beings.”

In a recent interview, Derouen said friction over transgender inclusion is likely to intensify.

“There has never been a time in the American church when Catholic hierarchy has had less moral credibility,” she said. “The people in the pews are taking responsibility for doing their own homework and recognizing that we are all God’s people.”

Michael Sennett, a 26-year-old transgender man, sees that happening at the Church of St. Ignatius of Loyola in Chestnut Hill, Massachusetts, where he is communications director.

The unwelcoming attitude of some bishops discourages him, but he’s heartened by advances, including the formation of a support group called LGBTQ+ Catholics.

“Overall I marvel at the progress,” Sennett said. “People are speaking up as never before, joining forces. … The laity is finding more power.”

Associated Press religion coverage receives support through the AP’s collaboration with The Conversation US, with funding from Lilly Endowment Inc. The AP is solely responsible for this content.