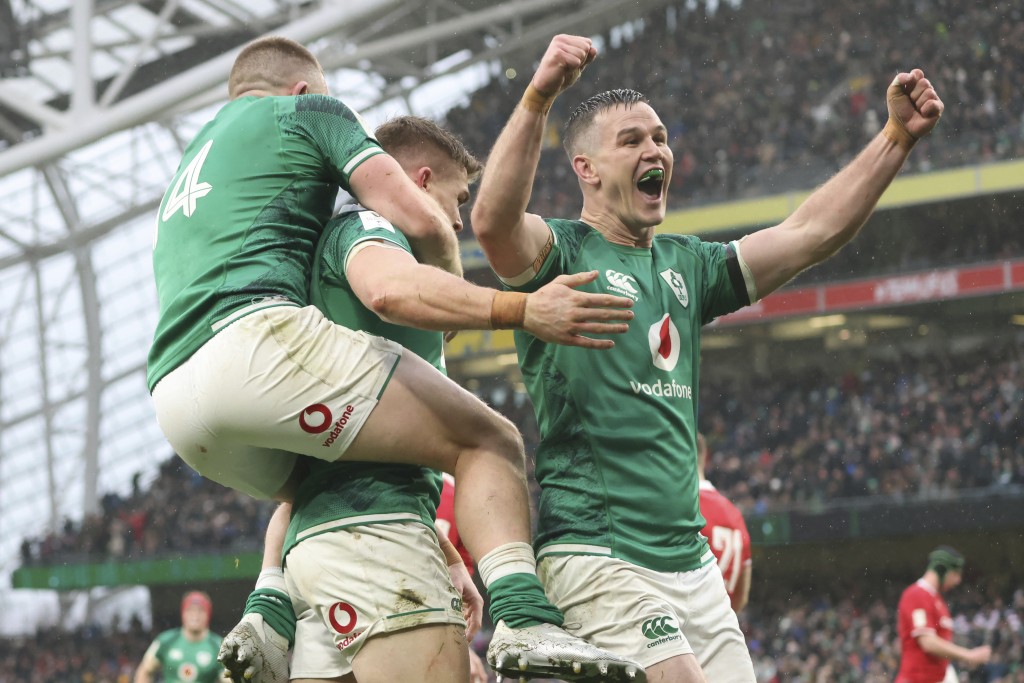 Even during the year he was considered the world's best rugby player, Jonathan Sexton endured talk about finding his replacement.

Sexton's eternal class for more than a decade allied to increasing aches and pains as he's aged have made unearthing his flyhalf successor the longest-running saga in Irish rugby.

Joey Carbery seems to be the heir apparent. But he's had to overcome his own problems. Injuries prevented him from being capped after the 2019 Rugby World Cup until last July. He was the able backup in the November tests then broke an elbow in December. But he's rallied again to be Sexton's talented deputy in this Six Nations. For now, Ireland's post-Sexton future is in Carbery's capable hands.

Carbery is the starting flyhalf on Sunday when Ireland welcome Italy to Lansdowne Road in the third round. He has kept the No. 10 jersey he wore against France two weekends ago even though Sexton was available after recovering from the minor hamstring issue which forced him to miss the showdown in Paris.

Coach Andy Farrell reasoned that Carbery deserves it. Carbery replaced Sexton late in the week before the France game, played well in a narrow loss, knew he could have played better, and could do with more experience. He's starting on only the 11th occasion in 30 tests.

“It just makes sense,” Farrell said, "and the person that agrees with that is Johnny. He's the captain of the side, he wants what's right for the team.”

Sexton is set to come off the bench on Sunday for only the second time for Ireland in 10 years — the last was in 2018 against Australia in Brisbane, also for Carbery.

Farrell regards Sexton as a once-in-a-generation player, and has dismissed concerns that the captain could still be Ireland's best flyhalf going into the Rugby World Cup in France next year at age 38. If Sexton isn't the starting 10, Farrell wants it to be because he's been outshone.

"Johnny isn't just going to stand to the side and say, ‘There you go guys, off you go and take over now,’” Farrell said. "We want those guys and other 10s to challenge Johnny and knock him off his perch.

"You don't want to just hand something over to someone that doesn't deserve it. That's not a squad.”

Sexton is far from ceding his crown, and he's unfazed by rivals.

"Look, I'm well used to competition, I've had it my whole career,” he said this week.

"Early doors with Ronan O'Gara and Felipe (Contepomi) in Ireland and in Leinster. And then, when you get the jersey, you have always someone else that you're competing with.

"Over the years (there has been) Ian Madigan, Ian McKinley, Paddy Jackson, Joey.

"Joey's been around a long time. He's 26 now so I've been used to it for the last five years. It's nothing new, nothing's changed for me.

"What's important to me is to make sure I prepare as best as I can. There's no point in worrying too much about what other people are doing. You just have to focus on yourself and make sure you're fit and firing when you do get the chance to play.”

Age has made the 2018 world player of the year increasingly susceptible to injuries, along with his fearlessness on the field.

Concussions last year cost him a third British and Irish Lions tour. Sexton was the starting Lions flyhalf against Australia in 2013 and New Zealand in 2017 and still the best British and Irish flyhalf in the 2021 Six Nations. But three concussions in and after that championship made the Lions selectors consider him a risk. His omission was a shock. The Lions came off second best and he had a decent rest.

He's off contract at the end of the season and aims to decide after this championship whether to have a crack at the World Cup next year.

“At the moment I'm loving it,” he said. "I love the training, my body is good, my mind is good and, in an ideal world, I would love to keep going.

"What I learned last year is that you can't plan too far ahead. I'm taking it game by game, campaign by campaign.”

And keeping his competition at bay.