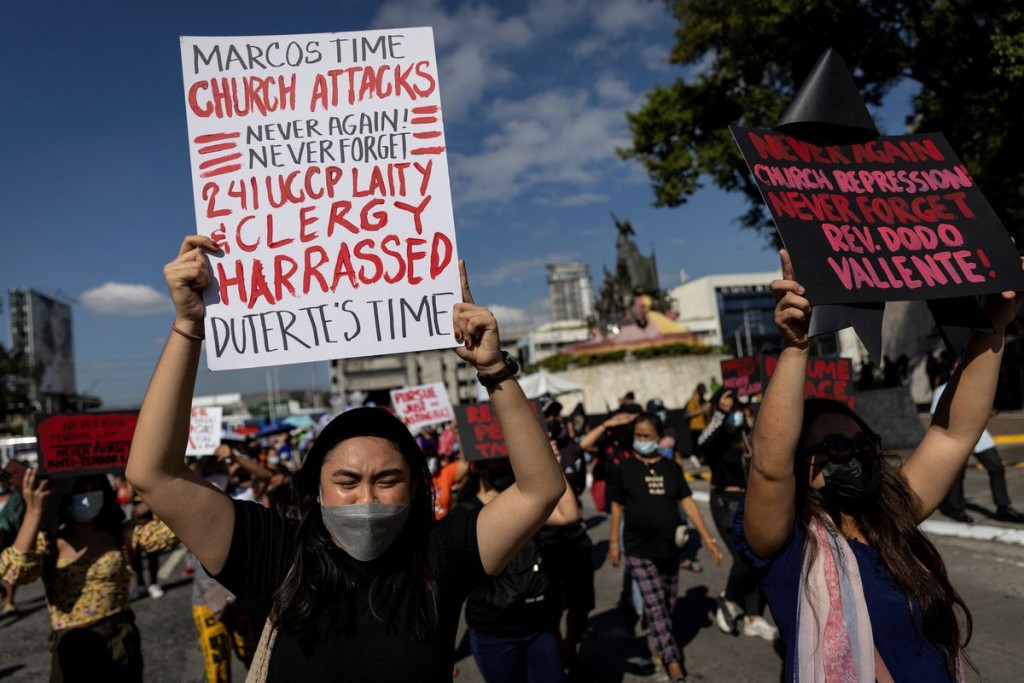 Thousands of Filipinos gathered on Friday to mark the anniversary of a "People Power" uprising against late dictator Ferdinand Marcos - with a new Marcos era potentially just 10 weeks away.

Thirty-six years after his father was overthrown and driven into exile, Ferdinand Marcos Jr is a runaway leader in opinion polls for the presidency, the end-game of a decades-long political fightback by a family accused of leading one of Asia's most notorious kleptocracies.

Opponents to the 64-year-old Marcos Jr, a former congressman and senator, have scheduled events throughout Friday seeking to discredit his election campaign and thwart what they warn will be a return of dictatorship and the demise of democracy.

"I can't contain my anger. He is proudly talking about his father. We should explain to everyone that the Filipino people threw Marcos Sr out," said Felix Dalisay, 69, who said he was tortured during the rule of Marcos rule.

Other protesters carried placards with phrases such as "No to Marcos" and "Return stolen wealth", while others danced at an event arranged by survivors of Marcos Sr's harsh era of martial law.

The rally took place at a monument on a Manila thoroughfare known locally as EDSA, where more than a million people massed in 1986 to drive out the disgraced leader.

The elder Marcos ruled for two decades, almost half of it under martial law during which thousands of his opponents were beaten and tortured, and disappeared or were killed.

The Marcos family lived extravagantly and were accused of siphoning off about $10 billion from the central bank, spending it on real estate, jewellery and artworks by Pablo Picasso and Claude Monet. About $3.4 billion has been recovered.

Despite its downfall, the family remains one of the wealthiest and most influential political forces in the country, as demonstrated by Marcos Jr's dominant lead in the latest independent opinion poll.

His spokesperson and media team did not immediately respond to a request for comment.

Marcos has not commented on the anniversary and posts on his widely followed social media on Friday were about upcoming campaign events.

That high social media profile is attractive to Filipinos born after his father's rule, and attempts to disqualify him over a tax crime have so far been dismissed by the election commission.

Marcos has been campaigning on a promise to bring unity to the Philippines but is not entertaining questions about atrocities during his father's rule, which his critics say his family has neither apologised for, nor properly acknowledged.

In the past few months Marcos has described his father as his idol and a man who had a clear vision for the country during what was a "golden age".