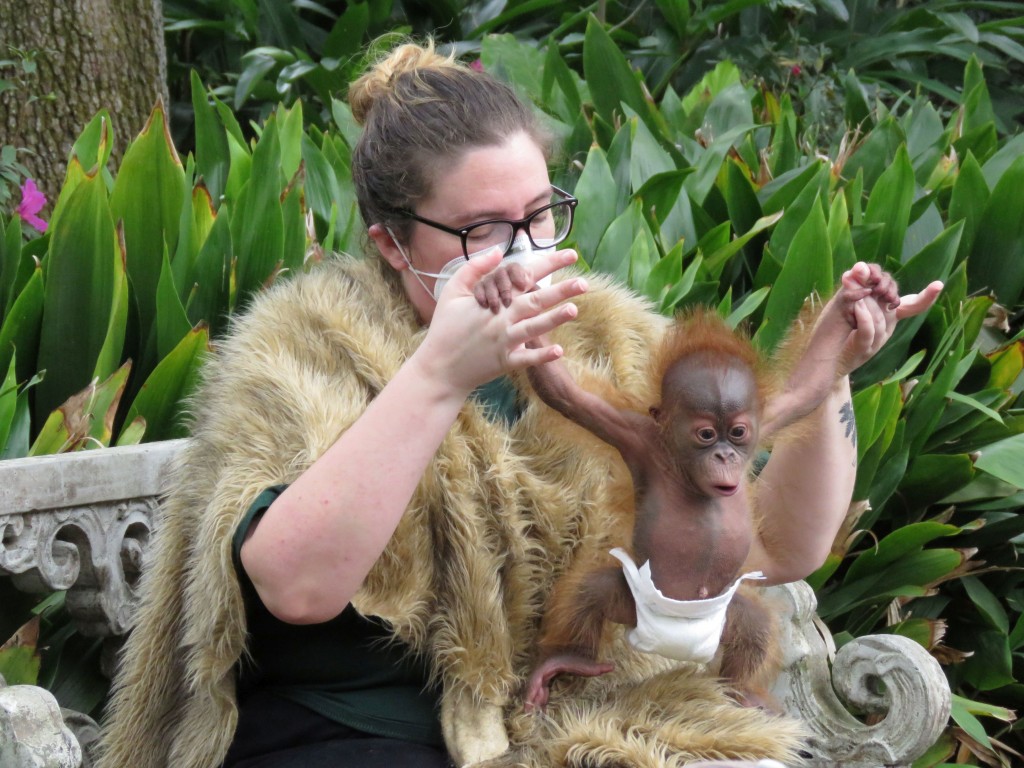 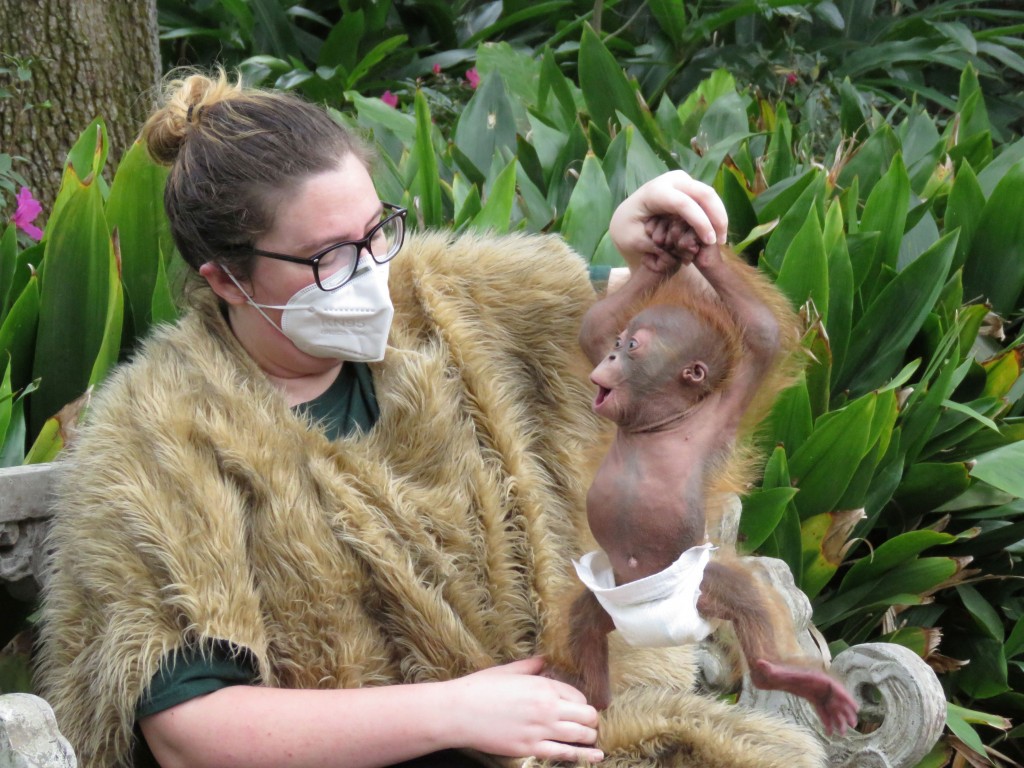 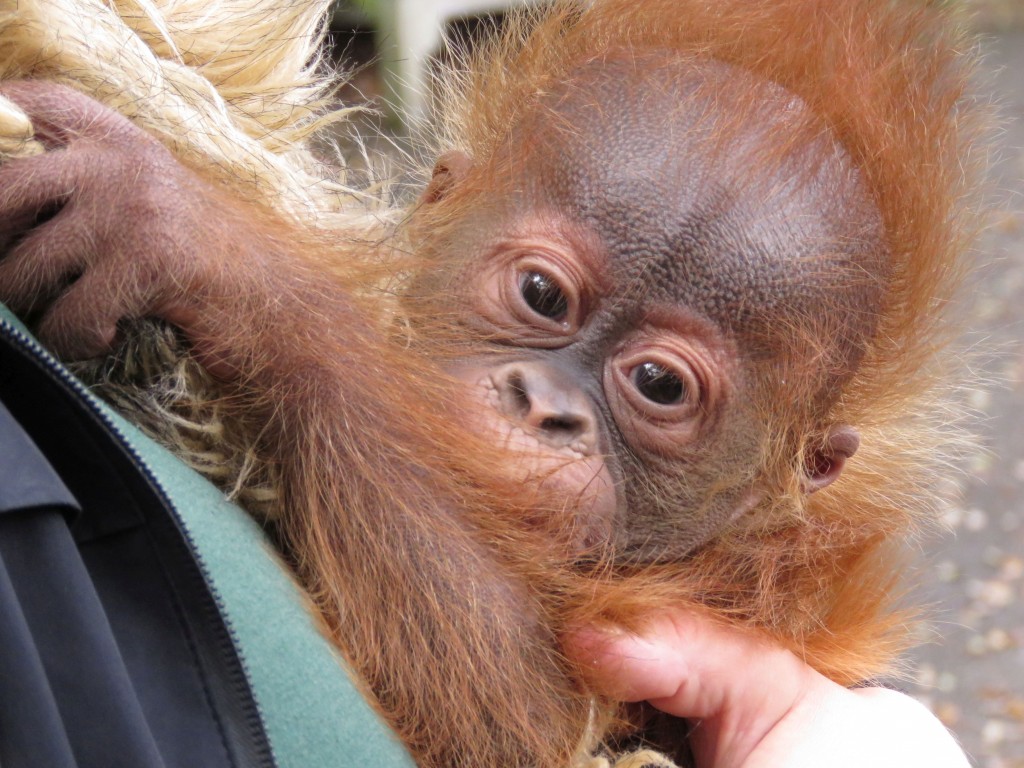 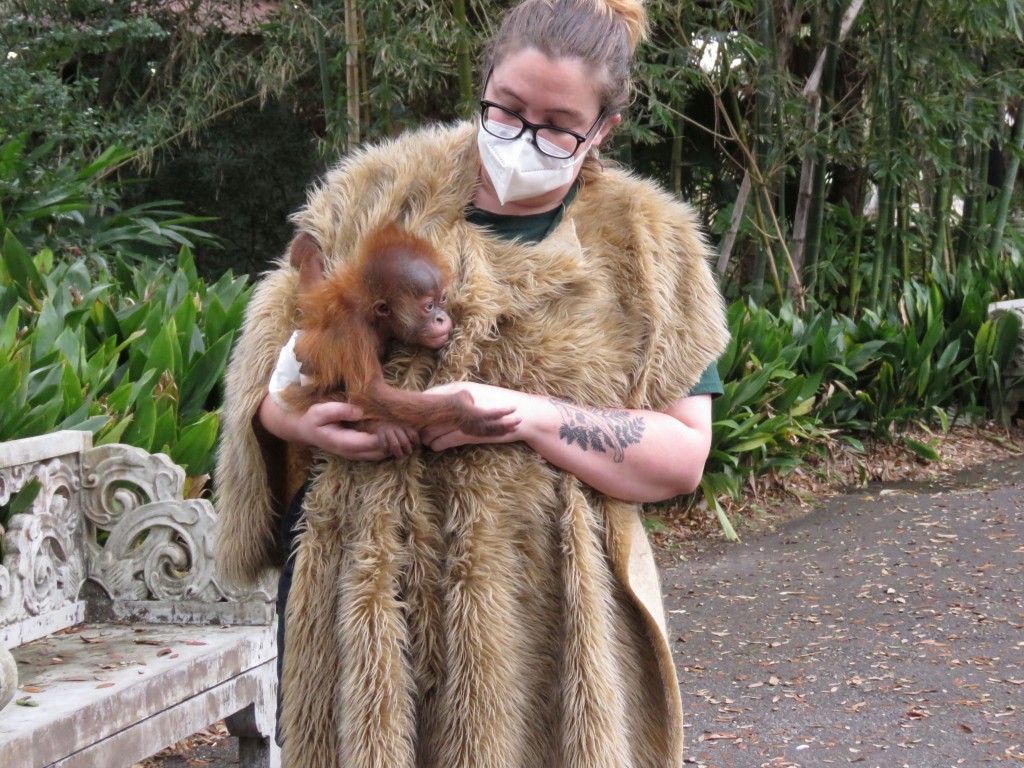 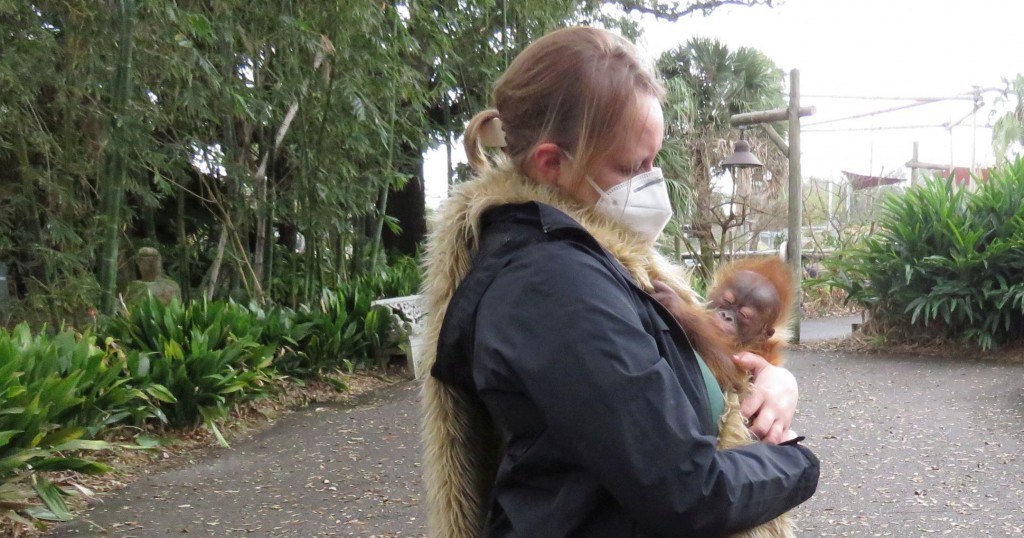 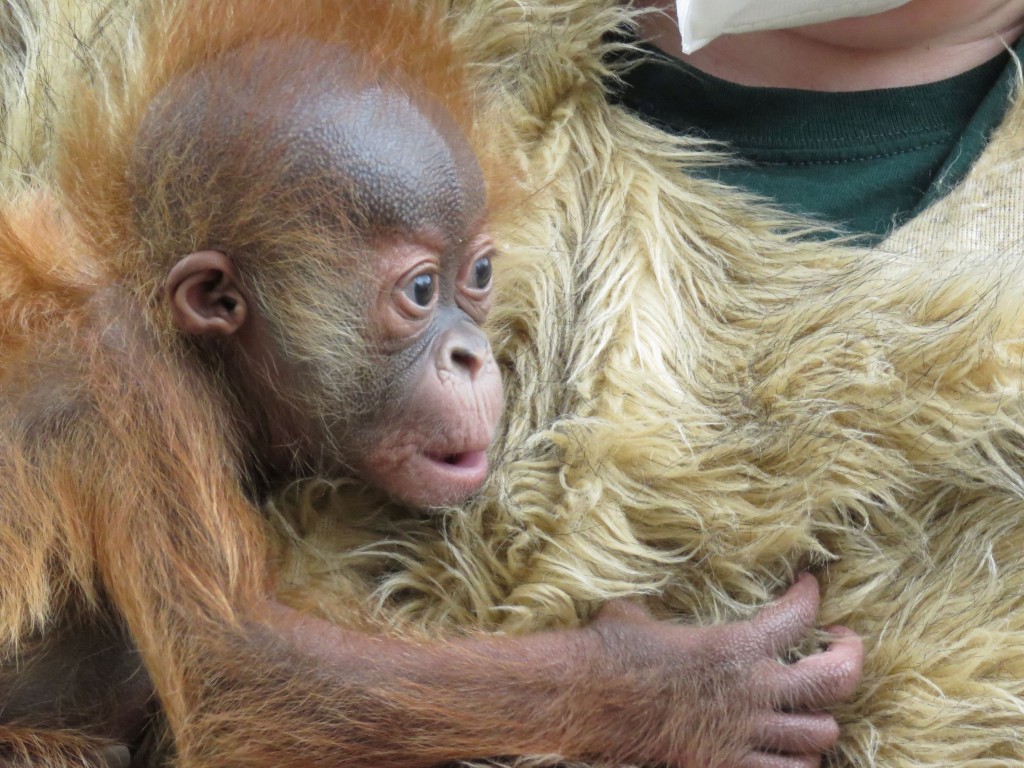 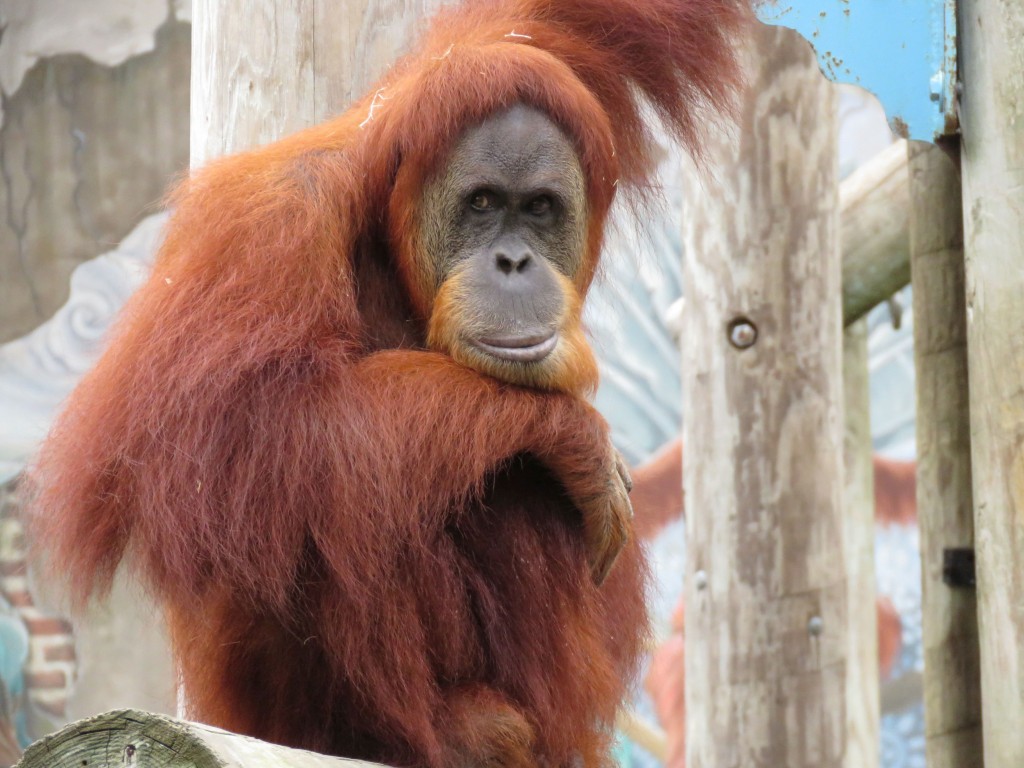 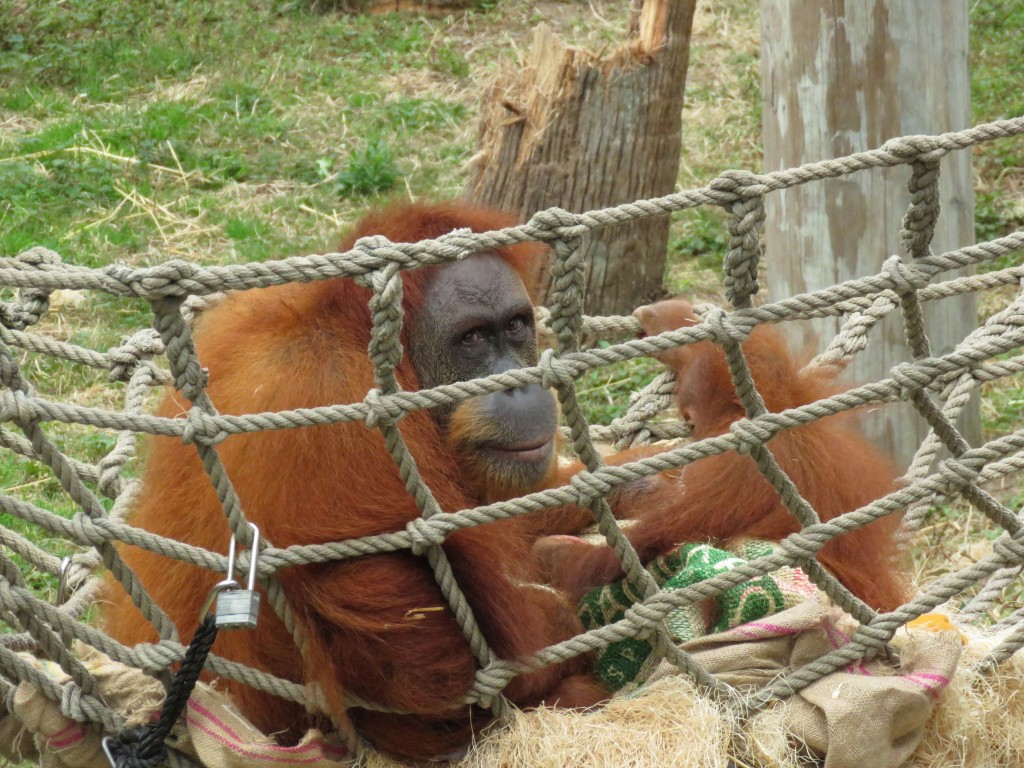 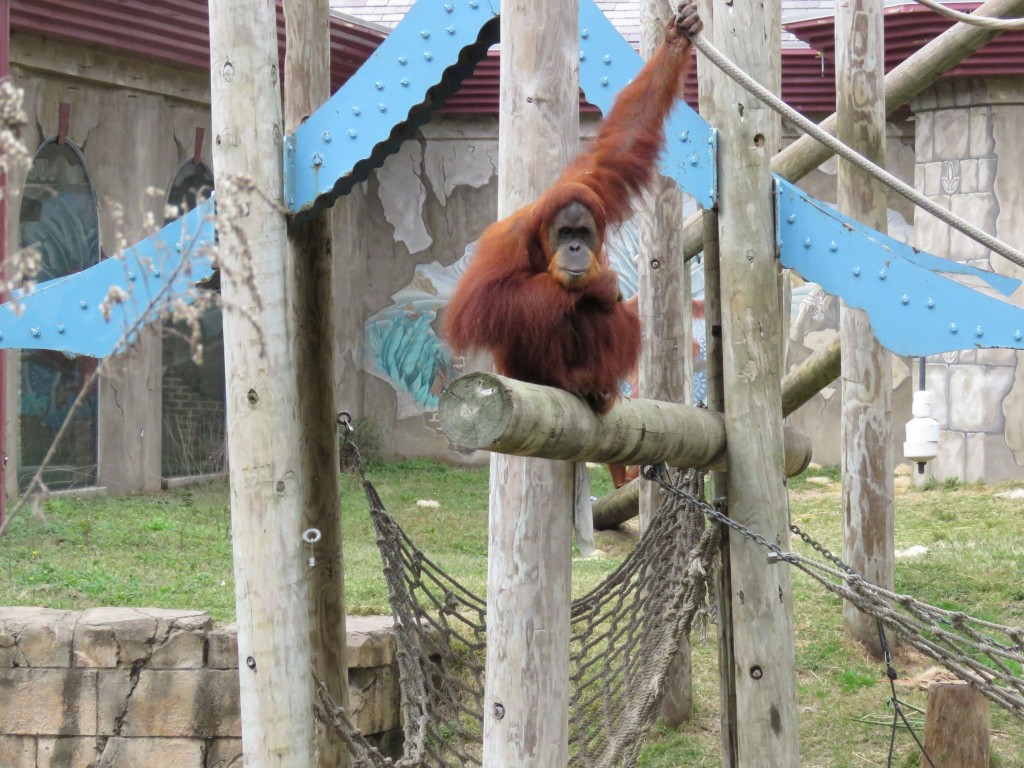 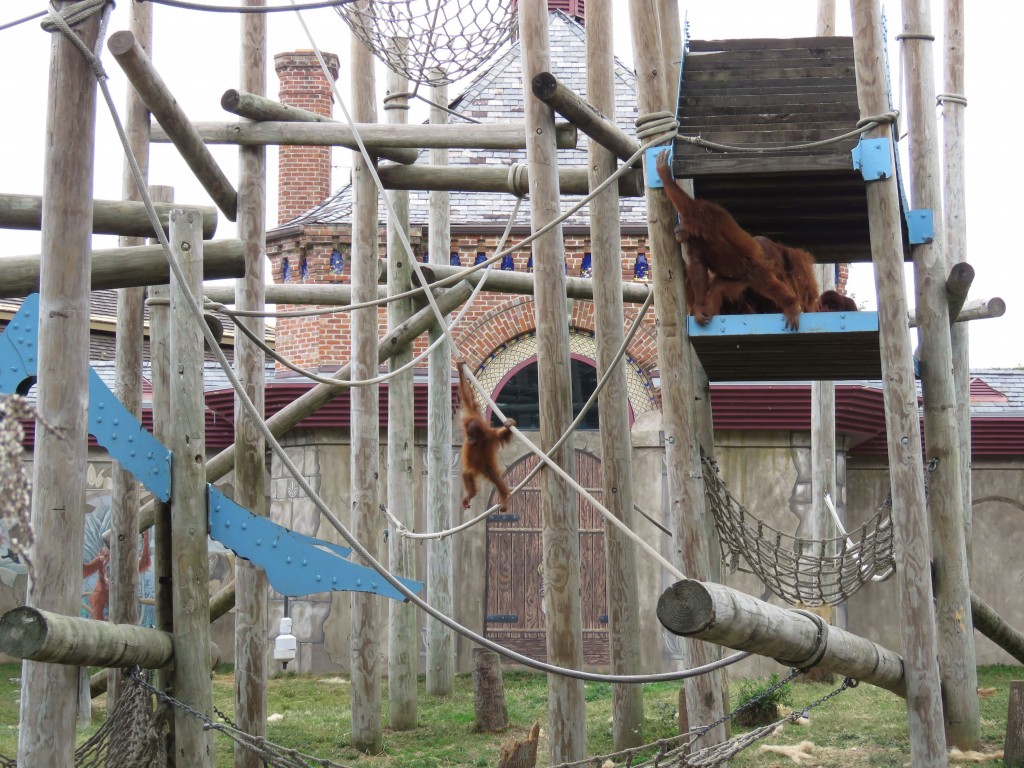 NEW ORLEANS (AP) — The 2-month-old critically endangered orangutan, still so tiny that infant-sized diapers hung loosely in front of his belly, clung tightly to a caretaker’s fingers as she lifted him gently from her lap.

Roux, born Christmas Eve 2021, needs to get strong enough to hold onto his mother 24 hours a day -- and 12-year-old Menari is the “wild child” of the Audubon Zoo's orangutans, said Kelsey Forbes, the assistant curator of primates.

“She is our biggest acrobat — a little bit crazy," Forbes said Tuesday.

So every day, Roux gets multiple sessions of “baby boot camp” including pullups to strengthen his grip and arms.

The zoo's Sumatran orangutans, like the other two orangutan species, are considered critically endangered by the International Union for Conservation of Nature and Natural Resources. Illegal hunting and loss and fragmentation of the forests where they live are major reasons that their numbers are falling in the wild.

So Roux is an important baby.

Three were born in 2019, one in 2020, three in 2021 and two so far this year, program spokesperson Angela Selzer said Thursday. One other baby, born this year at the San Diego Zoo, was a Sumatran orangutan; the other five were Bornean.

It's the caretakers who do most of the pulling for Roux, lifting him up and down as he grips their thumbs or fingers. But Roux also sometimes pulls himself up as he hangs between their hands.

Strength isn't the only thing he needs to be reunited with Menari, Forbes and curator Liz Wilson said Tuesday.

Caretakers want to reduce the number of night feedings, Forbes said. “Orangutans are primarily sleeping from sundown to sunrise. We want to be able to mimic that as much as possible,” she said.

And there's another bit of training, in case Menari, a first-time mother, isn't producing enough milk — the problem that left her baby so weak he needed constant medical care for a month. He needs to be able to drink an entire bottle poked through the den's mesh.

When he was first taken from Menari, Roux — who wasn't yet named — couldn't even suckle, said Forbes. He was fed through a skinny tube inserted through his nose to his stomach, and his caretakers' duties included making sure he didn't pick or pull at it.

An expert from Children's Hospital New Orleans taught the staff “tricks and tips” that included massaging the baby's palate and gums before each feeding, Forbes said.

“He took to it fantastically,” Forbes said.

His weight rose from 3.5 pounds (1.6 kilograms) to 5.6 pounds (2.54 kilograms) as of Thursday. Though a full-term baby, he started a bit underweight, possibly because he was a twin, Forbes said Thursday. The other baby was stillborn.

He spends much of the day with a caretaker in indoor areas, including a den bedroom, where the older animals can see him but not get close. They come in from their big outdoor yard to watch, Forbes said.

In the den, he gets to crawl around on various sizes of fire hose and other objects.

When the zoo is closed, he gets taken on walks around the zoo, including power-walking and abrupt turns to get him hanging tight.

The baby was named this month. His name, pronounced “roo,” is French for reddish brown, the color of an orangutan's long hair, and for the cooked mixture of flour and oil or butter used to thicken gumbo and other foods.

His father, Jambi, sired all three of Audubon's youngsters since coming to New Orleans in 2018 from Hannover, Germany.

Bulan, whose mother is the same as Menari's, constantly follows her half-sister, who plays with her.

Forbes says caretakers don't expect jealousy to be a problem when Roux and his mother are together.

“Not at all! We think that Bulan will be excited to have another playmate. Same with Madu!” she said Thursday.