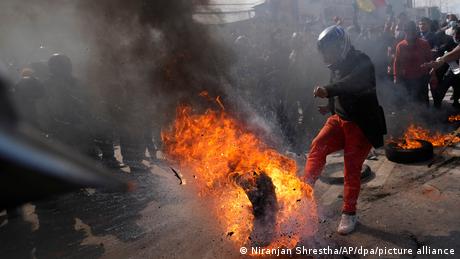 Nepal is facing geopolitical pressure over whether to accept $500 million (€441 million) in Millennium Challenge Corporation (MCC) grant assistance from the United States.

Nepal and the United States signed an agreement on the MCC grant in September 2017 to upgrade the Himalayan nation's dilapidated road networks and build electric lines.

The agreement was supposed to be endorsed by Nepal's parliament by June 2019. However, it couldn't move forward due to differences within the then-ruling Nepal Communist Party (CPN), along with other political forces.

Meanwhile, the US has pressed Nepal to stick to the MCC agreement and ratify it through the Parliament, while China has publicly cautioned Washington to avoid "coercive diplomacy" in Nepal regarding the project.

US Assistant Secretary of State Donald Lu earlier this month had warned that the US could terminate the compact if Nepali leadership failed to fulfill its own pledges to table and ratify accepting the grant by the end of February.

Political divisions over US grant

Nepali political parties and citizens are deeply polarized over the project.

The ruling Nepali Congress — a liberal democratic party — has stood in favor of the assistance; while its left coalition partners— including CPN (Maoists) and CPN (Unified Socialists)— are against its outright endorsement.

They have dubbed the grant a part of the US Indo-Pacific strategy that aims to counter China in Asia.

Nevertheless, the Nepali Congress-led coalition government on Sunday tabled the MCC bill in the House of Representatives, amid chaotic protests held by supporters of left-wing parties outside the parliament building,

While tabling the bill, Gyanendra Karki, the Minister of Communication and Information Technology, appealed to all parties to endorse it, saying that Nepal itself had approached the US for the grant and that it is beneficial for Nepal's development and economy.

The House is set to discuss its content on Thursday. But it is unclear whether the bill will be endorsed or rejected.

US and China face-off in Nepal

The controversy over the MCC compact has dragged the US and China into a face-off in Nepal as their diplomats have indulged in verbal barbs.

US Assistant Secretary of State Donald Lu earlier this month warned that Washington will review its bilateral relations with Nepal in the event of its failure to ratify the compact by the February 28 deadline, according to The Kathmandu Post.

Strategic analyst Indra Adhikari told DW that the ongoing tension over the US assistance was a sign of how Chinese influence has increased in Nepali society.

China's footprint in Nepal has increased in recent years, especially after an Indian border blockade in 2015-2016, when Beijing had extended vital support, including petroleum goods and agreed to provide transit access to landlocked Nepal.

In the following year, Nepal joined the Belt and Road Initiative (BRI). In October 2019, Chinese President Xi Jinping paid a state-visit to Nepal, in which the two countries elevated their bilateral relations to a "strategic partnership" and signed a slew of infrastructure-related deals, including a plan to build a trans-Himalayan railway line under the BRI framework.

Although a section of Nepali society has questioned the conditions and financial implications of BRI projects, many people in Nepal have been attracted by China's "charm offensive."

During the visit, President Xi also warned that "anyone attempting to split China will be crushed and any external force backing such attempts will be deemed by the Chinese people as pipe-dreaming," apparently referring to the protests and activities of the pro-Dalai Lama forces in Nepal.

Time and again, the US has tried to clarify that the MCC compact is purely a development grant. However, rumors and disinformation have been circulated both online and offline about it.

There have been a number of videos on YouTube full of disinformation, calling the MCC an American ploy to "trap Nepal and encircle neighboring China."

Talking to DW, Maoist party whip Dev Gurung claimed that US troops could be deployed in Nepal if they became part of the MCC compact.

Meanwhile, social media has been used to denounce and vilify those who make or share independent views or stand in its favor.

Earlier, many left parties had called a national strike to protest the MCC deal, whereas violent protests erupted outside the parliament with police resorting to using tear gas, rubber bullets and water cannons to disperse the crowds.

This is also not the first time that Nepal has faced controversy and politicization over external assistance or investment, mostly from the West.

In the early 1990s, the World Bank signed an agreement to build a 201-megawatt hydropower project and a 122 mile-access road in Nepal.

The World Bank in 1995 withdrew the $764-million deal following a heated political debate, and a request by the then-CPN-UML to the World Bank to withhold the project just ahead of the election in Nepal.

Bikash Thapa, a journalist and writer, who has covered hydropower issues for more than two decades, told DW that the over-politicization of foreign grants and investments has eroded the prospects of foreign direct investment flow to the country, as well as "tarnished" the image of Nepali leadership.