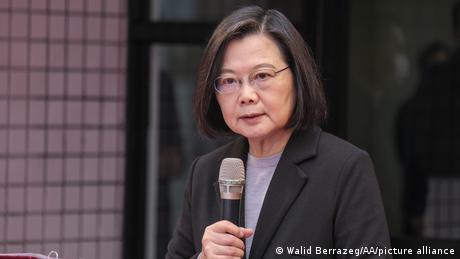 Taiwanese President Tsai Ing-wen on Wednesday called for increased surveillance and alertness on military activities in the region as the island becomes more cautious of China's movements amid the Ukraine crisis.

Speaking at a meeting about Ukraine, Tsai denounced Russia's move to order soldiers into the separatist regions in Ukraine.

"Our government condemns Russia's violation of Ukraine's sovereignty... and urges all parties to continue to resolve the disputes through peaceful and rational means," she said.

With China claiming sovereignty over Taiwan and vowing to seize it one day — using force if necessary — the self-ruled democratic island is closely watching the developments in Ukraine.

While Taiwan's government has said the region's situation is "fundamentally different" from Ukraine, Tsai has expressed "empathy" for Ukraine because of the military threat Beijing could pose to Taipei.

"However, in the face of external forces attempting to manipulate the situation in Ukraine and affect the morale in Taiwan's society, all government units must be more vigilant against cognitive warfare,” Tsai said.

China: 'Taiwan is not Ukraine'

Chinese Foreign Ministry spokesperson Hua Chunying dismissed any link between the issues of Ukraine and Taiwan.

"Taiwan is not Ukraine," she said on Wednesday. "Taiwan has always been an inalienable part of China. This is an indisputable legal and historical fact."

Taiwan's government has opposed China's territorial claims to the island, which Beijing regards as a breakaway province. Tsai said Taiwan, which has been governed separately since 1949, is an independent state.

Taiwanese Foreign Minister Joseph Wu also told foreign media this month that they were keeping an eye on whether China would take advantage of the world's attention focused on the Ukraine crisis to attack.

"China may think about using military action against Taiwan at any moment, and we need to be prepared for that," he told UK's ITV News.

At the end of last year, there was a massive increase in incursions by Chinese warplanes into Taiwan's air defense identification zone.

The West has also raised concerns for Taiwan as the crisis in Ukraine escalates.

British Prime Minister Boris Johnson had said on Saturday that if Western nations failed in fulfilling their promises to support Ukraine's independence, it would have damaging repercussions worldwide, including for Taiwan.