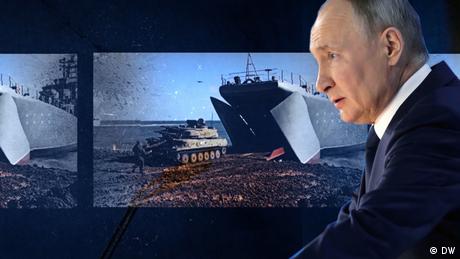 This year's Munich Security Conference has been concentrated on Russian President Vladimir Putin's clear but unspoken threat of a military attack against Ukraine.

The entire Western world has been holding its breath. The presence of 150,000 Russian soldiers along Ukraine's northern, western and southern borders, meanwhile, speaks for itself. As does the deployment of Russian naval ships from the eastern Mediterranean to the Black Sea. All the while, Putin says there are purely technical reasons for these troop and fleet movements. Russian news reports claiming the withdrawal of some troops have remained unverified, and they should not let Germany be tempted into relaxing ties with Putin, as the country so often does. The Russian president could invade Ukraine at any moment.

Putin's decision to escalate the situation to a new high partly stems from Germany's naive, ill-informed stance towards Russia since the end of the Cold War. As far back as February 5, 1997, US diplomat George F. Kennan — the architect of Washington's policy towards Russia — cautioned that the NATO accession of Hungary, Poland and the Czech Republic would stir up nationalist, anti-Western and anti-democratic sentiment in Russia. He warned NATO's eastward expansion would also make Russia more militaristic.

After decades of Soviet oppression, the vast majority of people in east-central Europe yearned for NATO's protection. As such, it was only right to fulfill their wish. Their right to national sovereignty and to choose alliances freely — as guaranteed by the Soviet Union and then Russia in the 1975 Helsinki Accords and Paris Charta — cannot be thrown overboard just because of a former superpower's Weltschmerz. Still, Germany and other states have failed to recognize Russian eagerness to weaken this NATO expansion.

This is all the more surprising, as Putin made clear almost exactly 15 years ago at the Munich Security Conference that NATO's eastward enlargements were forcing Russia to expand its missile arsenal with weapons capable of penetrating "the US system."

Germany took a backseat to French-led peace efforts after Russia invaded Georgia in August 2008, and Berlin was relieved that Putin did not decide to immediately occupy Tiflis. The German Foreign Ministry, which at the time was led by Frank-Walter Steinmeier, Germany's current president, was convinced Georgia's then-President Mikheil Saakashvili had provoked Russia's intervention. At the time, Steinmeier even intended to engage Russia in a "modernization partnership."

German policy-makers were equally taken by surprise when Russia annexed Crimea in 2014. This German tendency to accommodate Russian peculiarities, including clearly illegal ones, stems from a fatal misjudgment of Putin's mindset and his willingness to achieve his goal through the use of sheer force. He is prepared to use any means necessary, including military might, to re-establish the Soviet sphere of influence in Europe. He shows contempt for the international legal architecture that holds the European post-Cold War order in place.

The danger of Ukrainian democracy

Russia's current aggressive militaristic stance toward Ukraine is not just about a fanciful military threat or fulfilling post-hegemonic Russian dreams of power. The goal for Putin — for him personally rather than for the general Russian population — is the failure of Ukraine's democratic system, as flawed as it is. A stable democracy in neighboring Ukraine, which shares so much history and culture with Russia, would threaten support for Putin's kleptocratic dictatorship. That is something he cannot accept.

Laughable claims that Ukraine or NATO poses a danger to Russia stem from age-old fears of being encircled by Western military powers. This phobia is used to justify the need for an autocratic system centered on a strong leader able to neutralize any opposition.

Vladimir Putin may legally remain in the president's office until 2036. Until then, he will continue flexing Russian military might to further his agenda. The West, and Germany in particular, will only be about to counter him by marshaling military power and economic sanctions. Germany needs to wake up to this reality. Concessions that contradict Western values, such as proposing a "Finlandization" of Ukraine, are completely off the mark.

A value-driven foreign policy cannot accept Ukraine surrendering its right to self-determination, particularly since such a concession to Putin would be nothing more than a step on the path toward the complete political appropriation of the country. The German government must, therefore, make it unequivocally clear that Ukraine has the right to join NATO, even if this is not currently on the agenda.

Naturally, all available diplomatic channels need to be used in attempts to calm the situation. Key arms control accords, which need to be renegotiated as they have expired, provide a platform for fostering mutual trust and easing tensions. This could help assuage Putin's fears, proving an opportunity for the Russian president to show how serious he is about safeguarding European and Russian security.

This opinion was originally published in German.