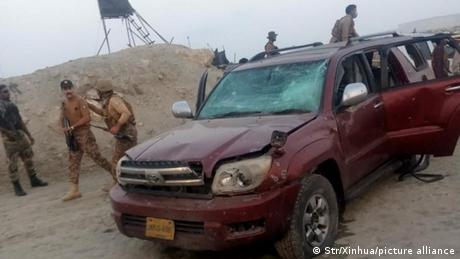 A militant separatist movement in southwest Pakistan's Balochistan province has stepped up attacks in recent weeks, targeting the Pakistani military and complicating infrastructure projects being developed by China as part of Beijing's Belt and Road initiative (BRI).

In 2015, China announced the China-Pakistan Economic Corridor (CPEC), a $46 billion (€41 billion) infrastructure network linking a port in Gwadar, a remote city on the Arabian Sea, to China's western Xinjiang region.

Many of the Chinese projects are being built in Balochistan, and Baloch separatists say the Pakistani government is exploiting local resources on behalf of Beijing's ambition to expand its influence.

With CPEC, Beijing aims to expand its influence in Pakistan and across Central and South Asia in order to counter US and Indian influence.

However, Baloch separatists have staged violent attacks in the vast province, which creates a precarious security situation for developing large infrastructure projects.

The Pakistani military said in a statement it was the biggest separatist attack in recent years.

The assault came as Pakistani Prime Minister Imran Khan was on an official visit to China. Khan paid tribute to the "brave" military forces for repulsing the attacks and acknowledged their "great sacrifices."

Pakistan has accused arch-rival India of covertly supporting the Baloch insurgents in the province, a charge New Delhi denies.

Who are the Balochistan militants?

The BLA is the largest and insurgent group in Balochistan and has been active for decades. It, and other groups, have stepped up its activities targeting Chinese interests in the province after CPEC projects began to expand.

In November 2018, a Baloch insurgent group claimed responsibility for an attack on the Chinese consulate in southern Karachi city, killing four people. In May 2019, separatists attacked the Pearl Continental hotel in Gwadar , killing five people and injuring six persons.

In June 2020, armed separatists raided the Pakistan Stock Exchange, where three Chinese companies at the time owned 40% of the stakes.

"The target of the Baloch nationalists is the Pakistani state, which they see as an oppressor," Husain Haqqani, the South Asia director at the Hudson Institute, a US think tank, told DW.

"They target China because they think that might get them Western and Indian support, and also because they see China's backing as important for Pakistan’s security establishment," he added.

“They demand freedom from the Pakistani state," Rafiullah Kakar, a political analyst from Quetta, told DW.

"They claim the Pakistani government and China are responsible for the abject poverty and oppression," Rafiullah Kakar, a political analyst from Quetta told DW.

Is China feeling pressure in Pakistan?

Stable security in Pakistan is necessary for Chinese investments to bear fruit, and increasing militant attacks could complicate projects.

"No investor, including China, wants to deal with constant violence or a long-running insurgency," said Haqqani.

"The Baloch might be weak and outnumbered but they have been consistent in their battle with the Pakistani state for years while getting little international support," he added.

"Pakistan has always accused Afghanistan and India, as well as Iran, of supporting the Baloch at various times but that view has attracted little support outside Pakistan," he said.

"The attacks will not expel the Chinese from Balochistan" said analyst Kakar.
However, he added that larger commercial investment in southern Balochistan in the presence of an insurgency is "not possible."

"Attracting private sector investment is impossible in presence of a conflict, and the Baloch insurgents could hurt Chinese development ambitions."

"The security threat is always present and it is not limited to only China," Pakistani Information Minister Fawad Chaudhry told DW.

However, Chaudhry added that the situation in Balochistan is "under control" and that Pakistani forces have made big gains against the militants in recent years.

Analysts said if the situation in Balochistan is to improve, the province will need to be better integrated into Pakistan's political and economic system.

Balochistan is Pakistan's largest province by land area, bordering Iran, India, and Afghanistan, but has the country's lowest population.

"They are not included in the power structures, over the years there has been resentment," said Kakar.

"To end deprivation there is a need to change the political system in the province for the benefit of poor people," Chaudhry said.

However, he added that not being satisfied with the government is "an excuse to justify terrorism and take up arms against the state.