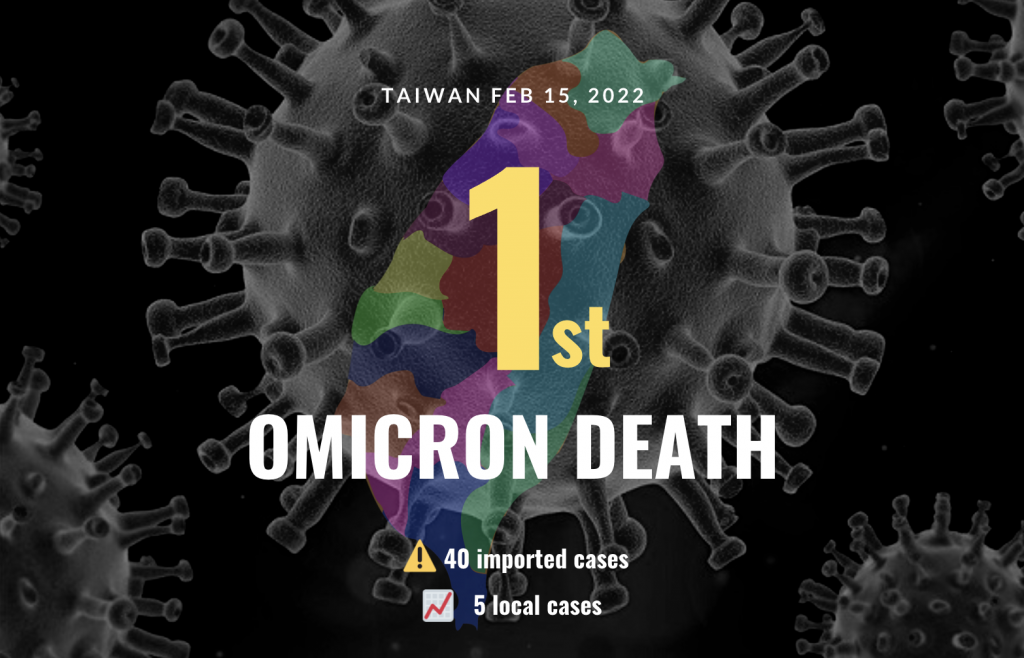 Chen said the local cases include two males and three females ranging in age from their 20s to their 40s. Of these, two were located in New Taipei City and three in Taoyuan City.

The 40 cases include 25 males, 15 females, and one case still under investigation, ranging from under 10 years old to their 70s. Of these, 13 tested positive upon arrival at the airport and 27 tested positive during quarantine.

They arrived between Jan. 5 and Feb. 14 from the U.S. (eight cases), India, Singapore, Australia, the Philippines, Vietnam, Japan, the U.K., Spain, Algeria, Canada, France, Hong Kong, Italy, Sweden, Germany, the Netherlands, Indonesia, Brazil, and Argentina. The country of origin of five cases is still being investigated.

The single death reported on Tuesday, case No. 18,138, was a Taiwanese woman in her 80s with a history of chronic disease. She was listed as a contact of case No. 17,368 and is tied to the Golden Voice Singers Club cluster infection.

Due to the need for medical treatment, she was placed in a hospital isolation ward on Jan. 10 and tested positive for COVID at the end of her quarantine on Jan. 19. She developed pneumonia in her right lung and her condition continued to deteriorate.

In early February, she underwent PCR testing twice, with the Ct value being 33 after both tests. This met the CECC's standard to be released from isolation.

However, that same day, she developed aspiration pneumonia and sepsis. On the morning of Feb. 4, she suddenly lost all vital signs and was declared dead.

Doctors believe that the main cause of death was aspiration pneumonia and cardiovascular disease. She also suffered from diabetes and chronic renal failure, which required dialysis.

She had received one dose of the AstraZeneca COVID vaccine in June and the second dose in September. She did not receive a booster shot and died 16 days after being diagnosed with COVID.

Chen explained that according to current domestic regulations, if a person infected with COVID dies within 60 days after diagnosis, and unless there are exceptional circumstances, they are deemed to be a COVID death.

Philip Lo (羅一鈞), deputy head of the CECC’s medical response division, announced that genetic sequencing revealed that the woman had been infected with the Omicron variant. He then confirmed that she is the first person in Taiwan whose death has been attributed to Omicron.

A total of 130 people have been removed as confirmed cases, while 14 cases are still under investigation. To date, 852 individuals have succumbed to the disease.

Of the 839 deaths from local infections, 413 were in New Taipei; 322 in Taipei; 29 in Keelung; 28 in Taoyuan; 15 in Changhua County; 13 in Hsinchu County; five in Taichung; three in Miaoli County; two each in Yilan and Hualien counties; and one each in Hsinchu City, Nantou County, Yunlin County, Tainan City, Kaohsiung City, Pingtung County, and Taitung County. The 13 other deaths were imported cases.