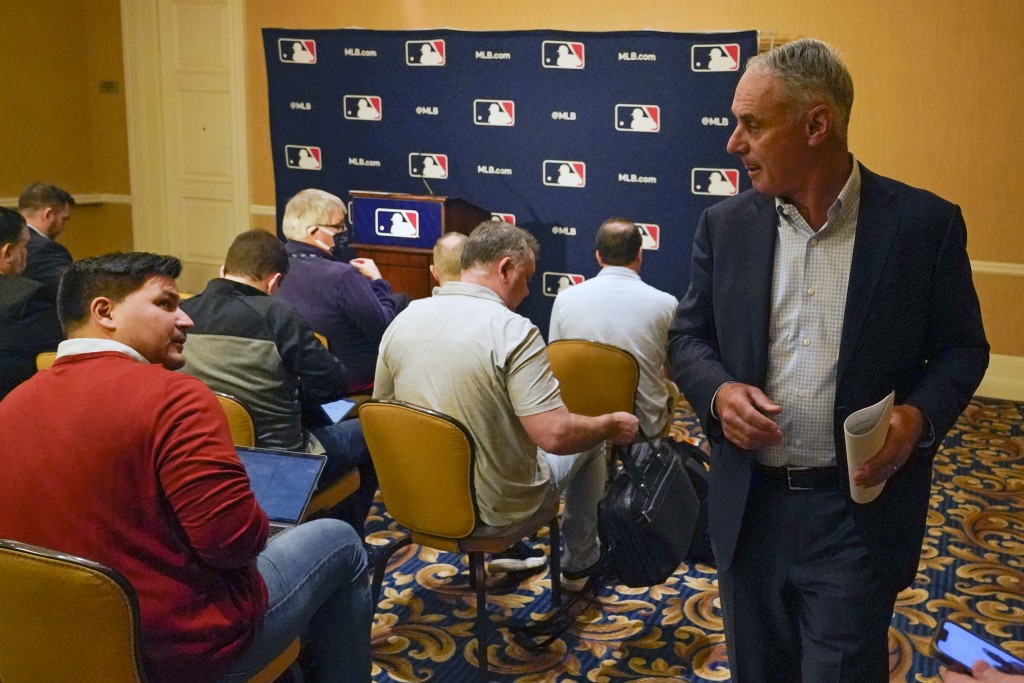 ORLANDO, Fla. (AP) — Baseball Commissioner Rob Manfred says losing regular-season games to a work stoppage would be a “disastrous outcome,” yet spring training remains on hold as the threat to opening day increases.

With the second-longest work stoppage in baseball history stretching into its 71st day, Manfred said teams will make a “good-faith, positive proposal in a effort to move the process forward” when negotiations with the players' association resume Saturday. It will be just the fifth economic bargaining session since the five-year labor contract expired.

MLB planned to move somewhat in the union's direction, two people who attended the owners' meeting told The Associated Press. The people spoke on condition of anonymity because Manfred did not discuss details of the proposal.

“I am an optimist and I believe we will have an agreement in time to play our regular schedule,” Manfred said during a news conference Thursday after three days of meetings. “I see missing games as a disastrous outcome for this industry, and we're committed to making an agreement in an effort to avoid that.”

Spring training workouts had been scheduled to start on Feb. 16. Opening day is March 31.

“The status of spring training is no change right now,” Manfred said. “We're going to have a conversation with the MLBPA about the calendar. We understand where the calendar is, but until we have that conversation and until we see how this session on Saturday goes, it's no change."

Whenever an agreement is reached, at least three weeks of workouts are needed.

“We thought, 20, 21 days, whatever we had in 2020 was a problem for us,” Manfred said, referring to the pandemic-shortened schedule. "The injury data supports that idea. We’d like to be 28. I’m trying not to be hard and fast. But we think more like four weeks makes sense.”

Before workouts can start, additional days are needed to gear up.

“We do have some logistics that would have to be handled between an agreement and actually opening the camps, the biggest of which is the players getting where they need to be,” Manfred said. “They have to ratify and we have to ratify and we won't open until it’s ratified. But both of those activities can take place at the same time, concurrently. It’s a few days. It should all be able to be done in a few days.”

Manfred confirmed that testing players for steroids stopped when the lockout began.

“Our legal authority to conduct drug tests expired with the expired agreement,” he said. “It’s a topic of concern. Labor disputes make topics of concern. It’s another one caused by the dispute.”

Manfred also said the teams do not intend to use players with minor league contacts to play major league exhibition games.

Players, led by former All-Star first baseman Tony Clark, are angry over a decline in payrolls over the previous contract, what they say is a lack of competition by some teams and what they allege is service-time manipulation.

The union has proposed allowing the accrual of service time by rookies for awards and special accomplishments, a draft lottery, expanding arbitration eligibility to its level before 1986 and decreasing revenue sharing.

MLB says it will not increase arbitration eligibility or decrease revenue sharing.

The sides disagree on minimum salaries and the size of a draft lottery, and they also are far apart on luxury tax thresholds. MLB would increase tax rates; Manfred said he misspoke during the news conference when he said they were the same in the proposal.

The sides both would establish a bonus pool for pre-arbitration players but differ vastly on the amount.

MLB would expand the playoffs from 10 teams to 14, while the union is offering 12.

Manfred said MLB had agreed to expand the designated hitter to the National League and to eliminate draft-pick compensation for free agents, an issue that led to a 50-day midseason strike in 1981.

Based on minimum salaries and the bonus pool. Manfred said players would receive over the five-year term of a deal “in the hundreds of millions of dollars" more, plus more value from the DH expansion and free-agent compensation elimination.

“We have a proposed an agreement that is better in every respect than the expired contract,” Manfred said. “In total, the proposals we've made would move the agreement decidedly in the players' direction. Where the clubs have been and remain unwilling to move is in response to player proposals that we believe will undermine the competitive balance in our game.”

MLB last week asked that a federal mediator join talks, but the union rejected the offer.

Some players have vilified Manfred for his role.

“What somebody says on social media really doesn't affect my thinking,” he said. “It's my responsibility to do everything we can to make an agreement that the industry can live with and keep the game on the field, and we are trying to do that.” ___