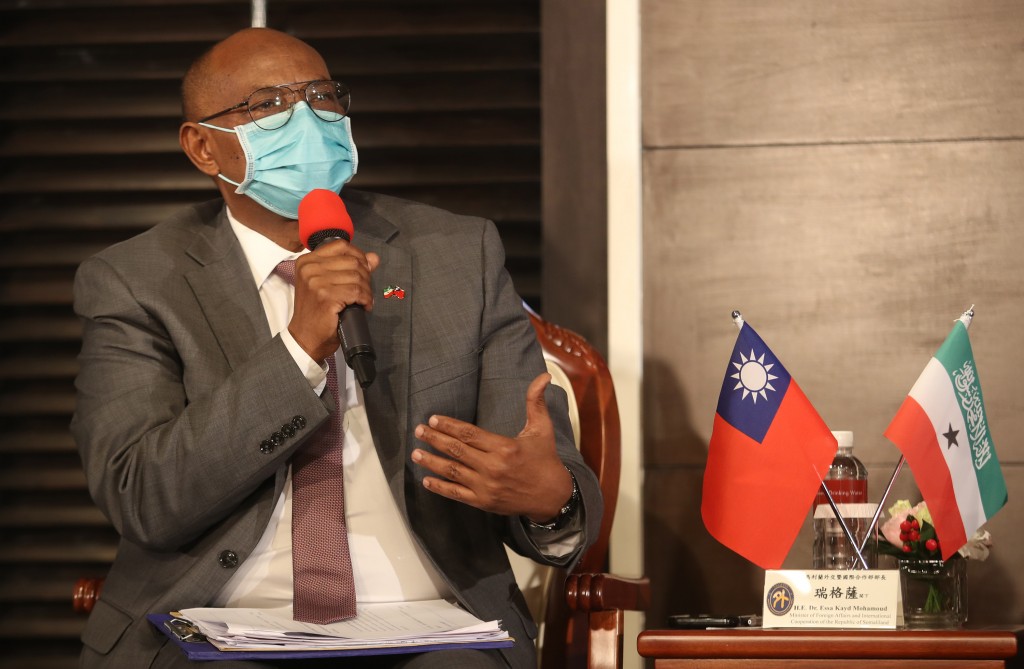 TAIPEI (Taiwan News) — “Relations we have (with Taiwan) are at the highest level. The best we can have,” Somaliland Minister of Foreign Affairs and International Cooperation Essa Kayd Mohamoud said during a press conference in Taipei on Friday (Feb. 11).

A delegation consisting of Mohamoud, Minister of Planning and National Development Saad Ali Shire, Minister of Health Omar Ali Abdilahi, and Minister of Livestock and Fisheries Saeed Sulub Mohamed arrived in Taiwan on Tuesday to meet with President Tsai Ing-wen (蔡英文) and other high-level officials and discuss bilateral relations over the course of the week.

Mohamoud pointed out the countries’ shared values of democracy, respect for human rights, and women's empowerment. He said that “those that look like each other, get together,” adding that this is what Taiwan and Somaliland have done.

The foreign minister said that the two nations are both resilient and that Somaliland stands for democracy and free expression, just like Taiwan. He highlighted Somaliland’s democratic processes, saying it held two peaceful elections last year without a hitch, in stark contrast to its neighbor Somalia.

In terms of cooperation, Mohamoud said that Taiwan has provided technical assistance in the agriculture, information technology, trade, and medical sectors. “We are doing so many things with Taiwan.” One area of cooperation he mentioned that could be deepened is maritime security.

Somaliland plans to strengthen the capability of security forces, particularly training and equipment for its coast guard. This would be “for the greater good of the area,” he said, as it keeps the Somaliland coastline free from piracy, terrorism, illegal fishing, and illegal dumping of waste and contributes to the overall security of vital shipping lanes in the Red Sea.

The foreign minister also said his country is rich in natural resources and that Taiwan has the know-how to access them. “We expect Taiwan to assist in these areas,” he said.

With regard to whether the two countries will establish diplomatic relations in the future, he said he did not understand why diplomatic relations are always mentioned whenever the issue of Taiwan’s foreign relations comes up. He praised current bilateral relations as “high and multi-faceted” and said Somaliland has never had such a partner as Taiwan.

Mohamoud said Somaliland is a sovereign country that has determined territorial borders, a defined population of approximately 5 million, different political parties, and its own currency, passport, and justice system: “We are a country.”

When asked if he is afraid of pressure from China, Mohamoud said, “We are born free. We will stay free. We will earn our business the way we want. China cannot dictate.”

The foreign minister stressed that the East African country decides who it wants to deal with based on two conditions: foreign countries must acknowledge Somaliland’s sovereignty, and all exchanges must be conducted without prior conditions or strings attached.

Shire said the Taiwan-Somaliland relationship is still in its infancy but that “in a short period, our cooperation has been deep and diverse.” He said there are a lot of things Somaliland can learn from Taiwan, and vice versa, in the areas of security, development, and investment.

The bilateral relationship is not only beneficial to each country but to the global community, he added.

Somaliland is currently hoping for more investment, Shire said, adding that it has awarded concessions to several countries to explore hydrocarbons within its borders. He mentioned that Taiwanese state-owned petroleum company CPC Corporation has expressed interest and said he hopes it will start activities there soon.

Abdilahi said there is still a lot to discuss with regard to development, education, health, energy, and the economy. He said he was fascinated by Taiwan’s level of development and hopes relations can be "higher than... the building we saw last night, (Taipei) 101."

Taiwan and Somaliland mutually established representative offices in each other's capitals in 2020.