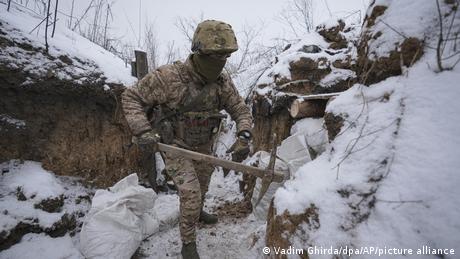 NATO is uncharacteristically divided on how to deal with Russia in the escalating crisis over Ukraine. "The US and the UK favor deterrence and a hard line; Germany, France and Italy are emphasizing dialogue, and a third group, including Bulgaria, Hungary and Slovakia, wants to stay out of the conflict and any troop deployment," says Stefan Meister, an expert on Russia and eastern Europe at the German Council on Foreign Relations (DGAP).

He told DW that, while Germany is usually the moderate link between these groups, that link is currently missing because of weak leadership.

He warns that, in addition, NATO is already weakened by populism, Trump, and Brexit. "Russia's President Vladimir Putin is trying to exploit this to negotiate a new security order in Europe – without the United States," he explains. And in this situation, the NATO countries of southeastern Europe have an unusually important role to play.

Croatia: 'If it escalates, retreat'?

However, there are some strident, and conflicting, voices making themselves heard in the region. At the end of January, the president of Croatia, Zoran Milanovic, caused confusion both at home and abroad when he declared that, in the event of a conflict in Ukraine, his country would retreat. Speaking in the Croatian capital, Zagreb, Milanovic said: "If it comes to an escalation, we will withdraw, down to the last Croatian soldier." He did not, however, specify exactly what he meant. There are no Croatian soldiers stationed in Ukraine.

The government of Croatia – a member of both the EU and NATO – immediately issued a contradictory statement. "The president does not speak for Croatia, but for himself," said the Croatian foreign minister, Gordan Grlic Radman. "We are and remain a loyal member of NATO."

What is most peculiar about the Croatian president's threat is that no one – not NATO, not the US, not Ukraine – had requested the Croatian military's involvement. "Milanovic's statements serve domestic political purposes. They have to be seen against the background of his ongoing feud with Prime Minister Andrej Plenkovic," explained Filip Milacic of the Friedrich Ebert Foundation in Vienna, in an interview with DW. "Lately, the president seems to be playing the nationalist card. He has called Milorad Dodik, the Bosnian Serb leader, a 'partner,' and he wants to pander to Croatian nationalists, who dream of redrawing the borders in Bosnia, with Russian support."

Bulgaria: History as a 'lobbyist' for Russia

In an appearance on Bulgarian television BTV on February 1, 2022, Russian ambassador Eleonora Mitrofanova made it very clear what Russia is demanding of NATO: that it withdraw behind the borders of states that were members of the organization in 1997. This would require NATO to withdraw all its troops from countries like Romania and Bulgaria and close its bases there. Mitrofanova said that these countries could formally remain NATO members – but only formally.

Bulgaria's defense minister, Stefan Yanev, is apparently comfortable with the idea. In December 2021 he was publicly reprimanded by the prime minister, Kiril Petkov, after he spoke out on Facebook against the redeployment of NATO troops to Bulgaria. In a parliamentary hearing the following month, Yanev then declared: "We should stop reading the foreign press and speculating. We should be bulgarophiles, and think in terms of Bulgarian national interests." If any NATO troops were to be stationed in Bulgaria, he said, they should be exclusively Bulgarian.

There is a domestic political background to the emphasis on "national interests" in Bulgaria, too. In December 2021, the nationalist Rebirth party entered parliament, and since then it has been putting pressure on the government. The ambassador Eleonora Mitrofanova is well aware of Bulgarian nationalists' traditionally pro-Russian sympathies. "Russia has an influence in Bulgaria: our common history," she says. "That is the most important lobbyist, the most important influencer in our relations."

The situation in Romania is quite different. Along with Germany and Poland, it is one of the countries to which additional US and NATO troops are already being deployed. According to a survey by the INSCOP Research polling institute, of all the countries in the region, Romania is the one where NATO enjoys the highest level of trust among the population. "Additional NATO troops are not just welcome, they're also a political asset for the government," Sorin Ionita, a political scientist at the Expert Group think tank in Bucharest, told DW. "Not even the nationalists dare to speak out against it."

Hungary is also a focus for NATO troop deployments, since, like Romania, it shares a border with Ukraine. Prime Minister Viktor Orban has maintained a "special relationship" with Russia for years. His public admiration for President Putin, and rejection of sanctions against his regime, have earned him the nickname "Putin's pinscher."

A few days ago, at the start of February 2022, Orban traveled to Moscow on what he called a "peace mission." However, the main issues under discussion were actually supplies of Russian gas, which Hungary buys at well below market value, and Russian involvement in the expansion of the Paks nuclear power plant. Consequently, Budapest is avoiding any discussion of Hungary getting more involved in NATO activities.

Turkey is a strategically important NATO member that also has a particularly complex relationship with Russia. Putin and President Recep Tayyip Erdogan are cooperating in the Syrian civil war, but in Libya they support different groups. Erdogan first snubbed his NATO partners by buying Russian S-400 air defense missiles – then Ankara supplied Ukraine with military drones. Like Germany, Hungary, and Bulgaria, Turkey is also dependent on Russian gas and oil.

"It's a delicate balancing act for Ankara," says Asli Aydintasbas of the European Council on Foreign Relations. "Erdogan has a special connection with Ukraine, and will support both it and NATO. On the other hand, he mustn't anger Putin so much that he turns off the gas, or seeks revenge in Syria."

"Putin knows exactly what he wants in eastern Europe – unlike the West," the British eastern Europe expert Timothy Garton Ash comments in the Guardian newspaper. "He wants to restore as much as possible of the empire, great power status and sphere of influence that Russia lost so dramatically 30 years ago, with the disintegration of the Soviet Union." In southeastern Europe, the Kremlin aims to achieve this by means of cheap gas and nationalism.

Filip Milacic of the Friedrich Ebert Foundation adds: "Russia is also offering the nationalist elites in the western Balkans something the West is not offering, and should not offer: the promise of redrawing the borders in the region."

However, in the view of Stefan Meister of the DGAP, cheap gas, nationalism, and disagreement will not be enough to divide NATO in the event of a conflict. "Right now, as the leading power, the US is able to assert itself.NATO is relatively united on deterrence, and when it comes down to it, even if smaller states pull out, they won't call their loyalty to the alliance into question. Weapons are being supplied, troops are being reinforced – and time is being bought where Russia is concerned."

This story was originally published in German.