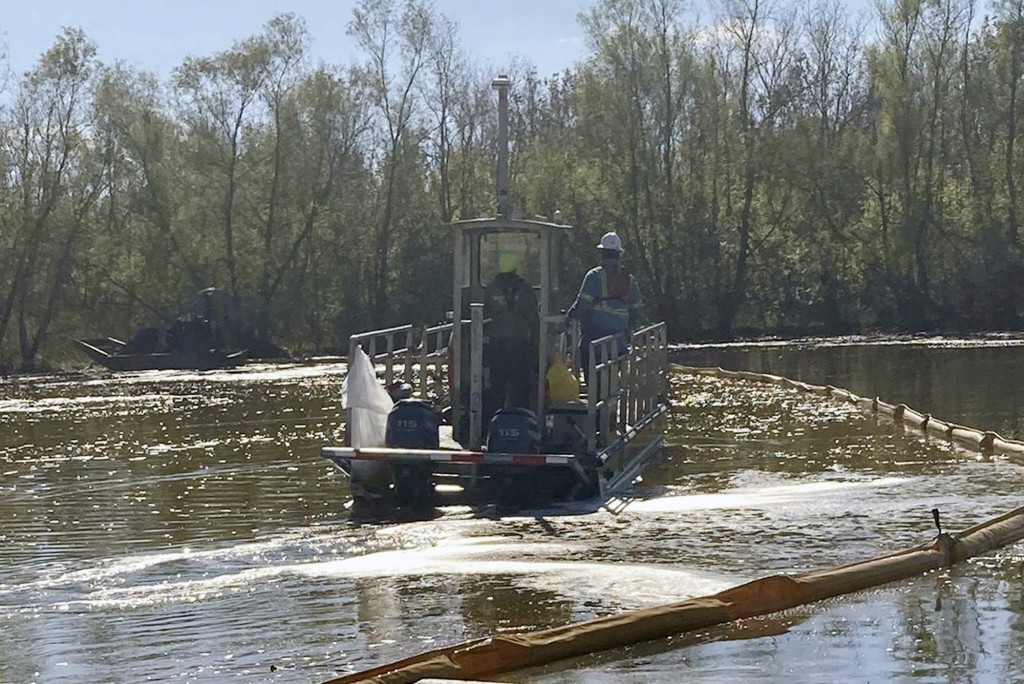 NEW ORLEANS (AP) — A corroded pipeline that ruptured and spilled 350,000 gallons (1.6 million liters) of diesel fuel into a New Orleans area wetland did not have a fully functioning leak detection system at the time, according to federal records, which also show the spill was larger than previously reported.

Two of three components of a leak detection system for the 16-inch (40-centimeter) pipeline did not issue alarms as they were supposed to when it broke just east of New Orleans on Dec. 27, 2021, Collins Pipeline Company disclosed in an accident report submitted to federal regulators.

The third part of the system worked as designed and issued an alarm, according to the report. It was not clear from the information provided by the company when that alarm went off or if the parts of the system that malfunctioned caused any delay in its response.

Quickly detecting pipeline ruptures is crucial to containing environmental damage. Yet coming up with systems that can do so reliably has been a longstanding challenge for the industry.

Collins, a Mississippi-based subsidiary of Parsippany, New Jersey-based PBF Energy Inc., reported the spill to authorities about eight hours after workers shut down the 42-year-old Meraux Pipeline a few miles from the company's refinery in Chalmette. Company personnel shut it off when they noticed a pressure change and flow meter measurements indicated a problem, according to federal records.

The company’s report said the spill detection system did not help identify the spill.

The diesel flowed into two man-made ponds and killed thousands of fish and dozens of birds, turtles, alligators and other animals. Most of the fuel was recovered but the accident caused an estimated $3.8 million in property damages, according to the company.

Problems with computerized systems that are meant to guard against pipeline spills have long plagued the industry, including a malfunctioning system during an accident last year that spilled tens of thousands of gallons of crude oil off the Southern California coastline. In 2010, an Enbridge Inc. pipeline spilled at least 843,000 gallons (3.2 million liters) of crude over 17 hours into Michigan’s Kalamazoo River even as numerous alarms went off in a company control room but were ignored.

“There are no standards on how sensitive, accurate, robust, or reliable they need to be,” said Bill Caram with the Pipeline Safety Trust, a Bellingham, Washington-based group that has pushed for stronger regulation of the industry. “I can’t help but assume that leaks would be caught much faster and the impact to people and the environment significantly lessened if operators’ leak detection systems were held to some sort of standard.”

PBF Energy did not immediately respond to telephone and email messages about the malfunctioning leak detection system and revised volume estimate.

The company told federal officials that it was investigating whether the pipeline control room or personnel in that room contributed to the spill.

The company listed external corrosion as the cause of the spill, which happened in the same place where an October 2020 inspection revealed significant corrosion along a 22-foot (7-meter) section of pipe. The line continued operating after a second inspection concluded the corrosion was not bad enough to require immediate repair under federal rules.

The line was repaired after the spill and resumed moving fuel in early January.

A federal investigation into the spill is ongoing by officials from the U.S. Transportation Department's Pipeline and Hazardous Material Safety Administration. Agency officials had no immediate response Monday to the company's disclosure of problems with the leak detection system, spokesperson Darius Kirkwood said.