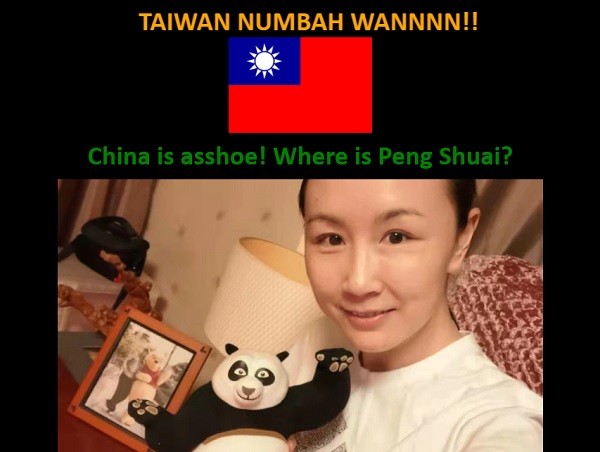 TAIPEI (Taiwan News) — Decentralized international hacktivist group Anonymous has hacked into a Chinese Communist Party (CCP) website to upload the words "Taiwan Numbah Wan," Taiwan's national flag, and a cryptic photo of Chinese tennis star Peng Shuai (彭帥), while also making proposals for a peaceful resolution to the crisis in Ukraine and threatening retaliation if Russia does not back down.

On Sunday (Feb. 6), Anonymous hacked into the official website for the Pingxiang County branch of the CCP based in Hebei Province's Xingtai City. The website was taken down hours after the hack, but an archived version of the page changed by the hacktivists can be found on Internet Archive's WayBack Machine and well as a bonus page titled "Ah Girls Go Army!"

The first image that appears is the Anonymous logo, immediately followed by an illustration of a Guy Fawkes mask.

The "Taiwan Numbah Wan!" meme appears with the Taiwan flag, as seen in a recent hack of the website for the Clearing-House Mechanism of the Convention on Biological Diversity (CHM). This was a reference to a famous quote by video game streamer AngryPug in 2015 to antagonize Chinese streamer Em0 during a match in the computer game H1Z1.

Below the Taiwan flag are the words "China is asshoe!" in reference to a meme that arose after a pro-democracy protestor was asked if he thought Trump should intervene in Hong Kong in 2019. On the same line is the question "Where is Peng Shuai?" which has become a rallying cry for those seeking justice for the tennis player after she accused former Vice Premier Zhang Gaoli (張高麗) on Weibo of coercing her into having sex.

A controversial photo of Peng then appears which was posted online by a Chinese reporter on Nov. 19 in an apparent attempt to dispel concerns about her disappearance for over two weeks after the post. However, the photo only raised more questions because she was leaning towards a photo of herself standing with Winnie the Pooh, a cartoon character banned in China for being used to mock Chairman Xi Jinping (習近平), leading many to speculate that she was trying to send a hidden message that she was being pressured by the CCP to put on a good show.

The rest of Anonymous' hack is dedicated to the current standoff between Russia and Western allies over Ukraine. The hackers announced the launching of "Operation Samantha Smith" in an apparent reference to the 1980s child peace activist.

The hackers called for the creation of a "neutral grouping" of countries "wedged between NATO and Russia" that would include Ukraine, Finland, Belarus, Georgia, Armenia, Azerbaijan, and Moldova.

The hacktivists then call for a referendum to be held in Ukraine's Donbass region on its ultimate fate. They recommend the referendum be held on whether to "follow a peace protocol or hand over the territories of Donbass to a United Nations peacekeeper administration."

They suggested that over time, a referendum could be held on whether the Donbass regions would reunite with Ukraine "with Northern Irish style status," become an independent state, or join Russia. As for NATO troops in Bulgaria and Romania, they recommended the notion of reviving the Treaty on Open Skies to "help ensure that troop deployments are at tolerable levels to each other."

Towards the bottom is a link to an article calling for an "Operation Warp Speed 2.0" to develop new vaccines and therapeutics to battle COVID. Just below that is an embedded video that introduces a group of experimental antiviral drugs being developed at MIT called DRACO (double-stranded RNA activated caspase oligomerizer).

In red text, the group warns that if tensions continue to worsen in Ukraine, "then we can take hostage... industrial control systems." In an apparent warning meant for Russia, they wrote that the "sole party to be blamed if we escalate on that, will be the same one who started it in the very first place with troop buildups, childish threats, and waves of unreasonable ultimatums."

The group also urged the UN to immediately deploy peacekeepers on "at least the Ukrainian side of the frontline in Donbass" under the basis of UN Resolution 337 (V) to "prevent any further provocations" by any side. 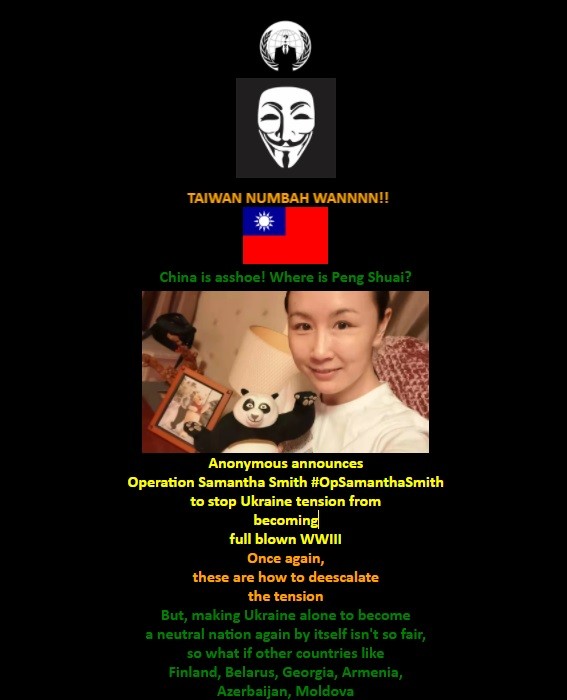