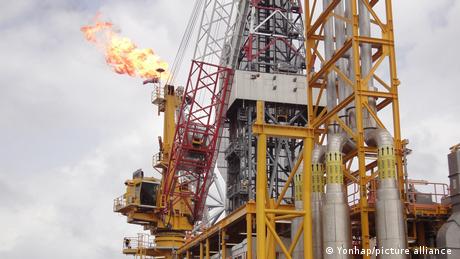 The European Union on Friday faced fresh pressure to cut off Myanmar's natural gas revenues after the first anniversary of the military coup passed this week without new penalties from Brussels.

Phil Robertson, deputy Asia director at Human Rights Watch (HRW) told DW that the EU urgently needed to impose "targeted sanctions that would cut off the oil and gas revenues that serve as the biggest source of foreign funds entering the Myanmar junta's coffers."

The country's military rulers are expected to earn $1.5 billion (€1.31 billion) from offshore and gas pipeline projects in 2021-2022 — about 50% of Myanmar's foreign currency, according to a government forecast.

HRW said Brussels could devise a way to ensure that payments to the state-run Myanmar Oil and Gas Enterprise (MOGE) could not be made in euros, while a coordinated approach with Washington would ensure US dollar transactions would also be barred.

The rights group noted last month that the West is "in a key position to impose sanctions since payments for gas operations are made in US dollars and involve multinational banks that fall under the jurisdiction of EU and US law."

Energy a 'jewel in bloody crown' of junta

Kyaw Win, executive director of Burma Human Rights Network (BHRN), told DW that the oil and gas sector is "the jewel in the bloody crown of the military junta."

"Targeting this sector will show the junta how very serious the EU is in helping us resolve this crisis as quickly as possible," he said, adding that the junta is "financing genocide, crimes against humanity and general violence" with the gas revenues.

More than 1,400 civilians have been killed and thousands arrested in a violent crackdown since the junta took over on February 1, 2021. Rights groups say the situation in the country continues to worsen and the economy is on the brink of collapse.

While the United States, Canada and Britain imposed new sanctions on a handful of Myanmar officials on Tuesday, the EU's announcement has been delayed — possibly until later this month, according to Asia Times, citing EU diplomatic sources.

The EU said in a statement on January 31 that the bloc "stands ready to adopt further restrictive measures against those responsible for undermining democracy and the serious human rights violations."

In December, the activist group Justice for Myanmar obtained leaked documents that it said showed military ruler Min Aung Hlaing's eagerness to know how the revenues from energy projects would keep flowing to the junta.

The letters between military officials and MOGE appeared to show Min ordering the disclosure of profits from the Yetagun offshore gas project, which was shut down at least twice last year due to a technical fault and due to workers contracting COVID-19.

Last year, nearly 500 civil society groups called on the West to blacklist the state-owned energy firm. They requested that the gas keep flowing, but that all revenues be "paid into protected accounts until a legitimate, democratic government is in power."

The call initially fell on deaf ears, particularly in the US and France. But after Western energy giants signaled recently that they would pull out of Myanmar within months, the prospect of more severe sanctions is more likely.

Total and Chevron pull out

The decision by the US-headquartered Chevron and France's Total affects the Yadana offshore gas project in the Andaman Sea which supplies electricity domestically and in Thailand.

"TotalEnergies has not been able to meet the expectations of many stakeholders …, who are calling to stop the revenues going to the Burmese state through the state-owned company MOGE from the Yadana field," the French firm said in a statement last week.

Both companies suspended some payments from the joint venture last year that would have reached Myanmar's junta.

But Total added that it was now "materially impossible" to funnel revenue away from the junta "as most of the payments for the sale of the gas are made directly by the Thai company PTT, the buyer of the exported gas."

PTT, which already has a 25.5% stake in Yadana, is expected to take over the two Western firms' holdings, a move HRW's Robertson denounced.

"It is imperative that action be taken to prevent PTT from continuing business as usual with the junta," he said.

Win, from Burma Human Rights Network, said the Thai energy firm "will soon also have to make a decision on the morality of its business operations" and predicted that Myanmar's other regional investors would also be forced to "reevaluate" their relationships with the junta.

Before the coup, China and Singapore were Myanmar's biggest investors. While Beijing has stepped up investments linked to its huge infrastructure project Belt and Road Initiative (BRI) over the past year, Singapore is removing military-affiliated firms from its portfolio.

US State Department Counselor Derek Chollet said Wednesday he had met with officials in Singapore to discuss ways to limit the military's access to financial assets overseas.

Rights groups have, meanwhile, warned that Myanmar is heading for a protracted internal conflict, with "innocent people being arrested, tortured, burned alive, gone missing, raped, with no end in sight to continuing grave human rights violations and attacks on the civilian population," Win told DW.

Meanwhile, Myanmar's ousted leader Aung San Suu Kyi has been the victim of a campaign of judicial harassment by the military rulers. The 76-year-old has already been sentenced to six years in prison and on Friday a new graft charge against her was added.