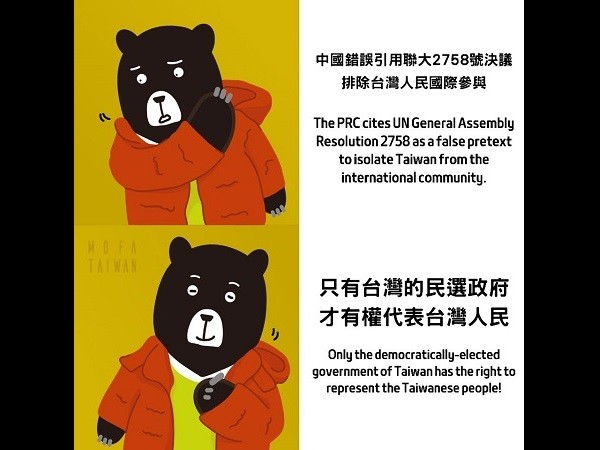 TAIPEI (Taiwan News) —The Ministry of Foreign Affairs (MOFA)'s take on a popular Drake meme has gained new attention as the 2022 Beijing Winter Olympics arrive and Taiwan continues to be sidelined from international organizations.

Taiwan was a founding member of the U.N. in 1949 but was replaced by China in 1971 after Beijing was admitted as a member. The country was subsequently removed from all U.N. organizations, such as the World Health Organization (WHO), in 1972.

On Oct. 25, 1971, U.N. Resolution 2758 excluded Taiwan under the premise that China is "the only legitimate representative of China to the United Nations." In 2007, the U.N. rejected Taiwan's bid to "join the U.N. under the name of Taiwan," as the body continued to cling to the notion that "Taiwan is part of China."

As the 50th anniversary of the resolution neared, MOFA posted two images based on the Drake "Hotline Bling" meme on its Facebook page on Oct. 13, 2021. In the original meme, the Canadian rapper is seen shunning something he detests in the top photo, while smiling with satisfaction at the second image as something that meets with his approval.

In the MOFA version a Formosan black bear cartoon character similar to OhBear sports an orange jacket similar to Drake's and looks away in disgust at the way China uses Resolution 2758 as a "false pretext to isolate Taiwan from the international community." In the slide below, the bear closes his eyes and smiles in agreement with MOFA's assertion that "Only the democratically-elected government of Taiwan has the right to represent the Taiwanese people!"

Amid pressure exerted by the International Olympic Committee on Taiwan's team to attend the opening and closing ceremonies of the Winter Olympics, the meme was posted on Reddit on Wednesday (Feb. 2) and quickly gained 618 upvotes. Users pointed out the resolution resulted in the removal of Taiwan from the UN Security Council despite the fact that it had been a founding permanent council member and that Taiwan's expulsion from the WHO had consequences that could be felt more recently as its warnings about the outbreak of the pandemic in Wuhan went unheeded.