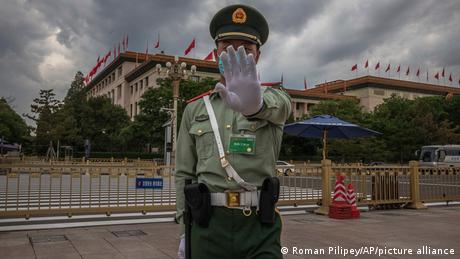 Foreign journalists in China are facing "unprecedented hurdles," according to a press freedom report by the Foreign Correspondents' Club of China (FCCC) released on Monday.

"The FCCC is troubled by the breakneck speed by which media freedom is declining in China," the report said.

What did the report say?

Of the over 100 foreign journalists that took part in the FCCC's survey, 99% said that they felt working conditions did not meet international standards.

Almost half of respondents said that their offices were understaffed as they were unable to bring journalists into the country as authorities have delayed visa approvals.

88% of respondents who traveled to China's northwestern Xinjiang region in 2021 said they were visibly followed, and 34% said that they were asked to delete data. Xinjiang has been the site of a crackdown on China's Uyghur ethnic minority, which has drawn international condemnation.

The FCCC noted that state-backed campaigns of online harassment have been used to make the job of reporting more difficult.

In the run-up to the Beijing Winter Olympics, 60% of the 127 respondents criticized the insufficient information provided by the organizers about events.

23% said that they were not able to get in touch with appropriate Olympics committee personnel, while 32% said they were excluded from events open to other media.

Only 10% of respondents said that they were able to reliably attend pre-Olympics events. Correspondents often only learn of press events after they occur, according to the FCCC report.

The FCCC said in its report that "media freedom deteriorates in the periods around China's major events — a time when the authorities want to ensure political stability."

According to the FCCC, most news organizations are planning to send foreign journalists from outside China to cover the Olympics, which will require entering a quarantine bubble. 90% of respondents to the survey said they were not planning to go into the Olympics bubble.

Hong Kong no longer an appealing option for correspondents

The FCCC report said that foreign correspondents that haven't been able to remain in China have relocated to cities such as Taipei, Singapore, Sydney and London.

The FCCC said that Hong Kong is no longer an appealing option for foreign correspondents, as China has begun expelling foreign journalists as well as arresting and jailing local journalists.

In December of 2021, pro-democracy news outlet Stand News was forced to shut down after its offices were raided by police and current and former staff were arrested.

In June last year, police raided the premises of the pro-democracy newspaper Apple Daily and the paper's executives were arrested for "collusion with a foreign country."