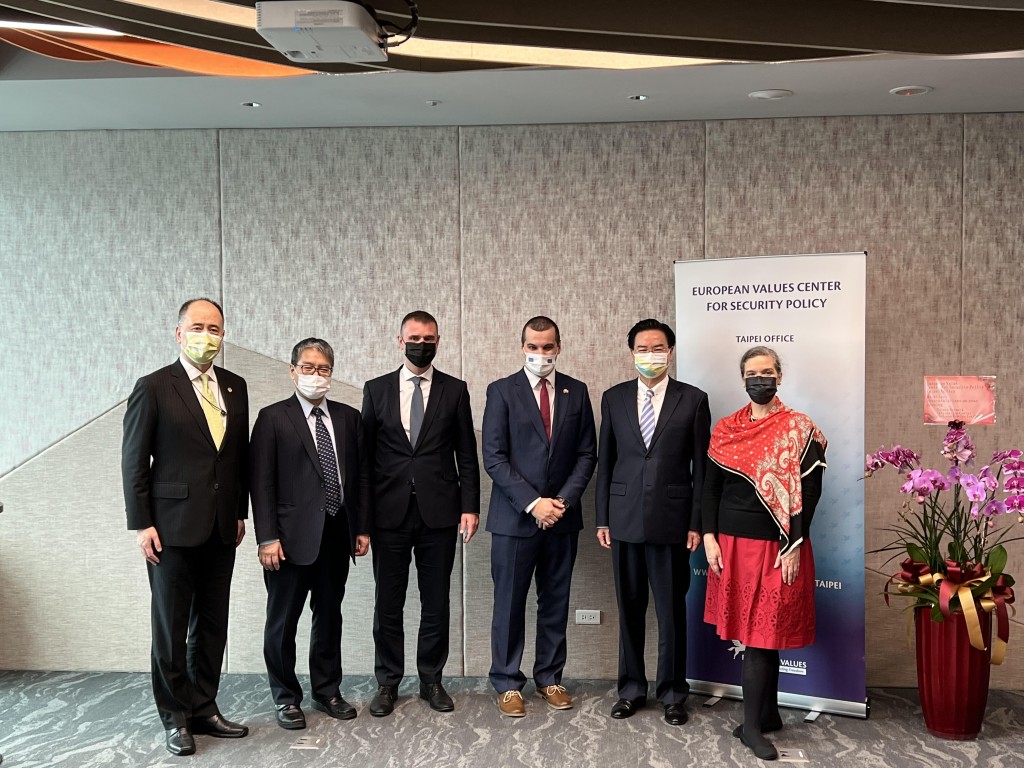 Wu kicked off the ceremony by pointing out that this is the first Czech and second European think tank to set up an office in Taiwan. He said that this office “is an example of what can be achieved when vibrant democracies work together by standing shoulder to shoulder.”

Even though the Czech Republic and Taiwan are thousands of kilometers apart with distinct cultural roots, “we are connected by common passion for freedom and democracy,” Wu said. These shared principles form a solid foundation on which we can develop a friendship over various public and private sectors and work in solidarity against the expansion of authoritarianism, he added.

The foreign minister said it is his sincere hope that the EVC Taipei office can share its expertise with researchers and institutions in Taiwan. He expressed confidence that future exchanges will bring “valuable insights and practical countermeasures to combat hybrid threats of disinformation, cyberattacks, and economic coercion.”

EVC Executive Director Jakub Janda said that appeasement does not work on authoritarianism.

Janda said that unity is key to facing adversity. He stressed that the more countries Taiwan has supporting it, the more limited China’s threats are, referring to a comment Member of European Parliament Raphael Glucksman said during a visit to Taiwan.

Janda said Taiwan and the Czech Republic have historical and political similarities, which makes them good partners to learn from one another.

The think tank director said that he hopes to transform the EVC into a de facto central European hub that can help Europeans who want to learn more about Taiwan to do so. He also mentioned that the think tank intends to invite Taiwanese experts to Europe in order to share their knowledge with European counterparts.

The majority of exchanges would cover political, defense, and information security issues, he added.

Janda said supporting Taiwan is “the right thing to do,” and it is necessary to build alliances to help those facing immense pressure. He also highlighted the importance of helping through actions and not just words.

The EVC is a non-partisan think tank aimed at protecting “liberal democracy, the rule of law, and the transatlantic alliance of the Czech Republic.” It also strives to defend Europe from the influences of Russia, China, and Islamic extremists, according to its website.