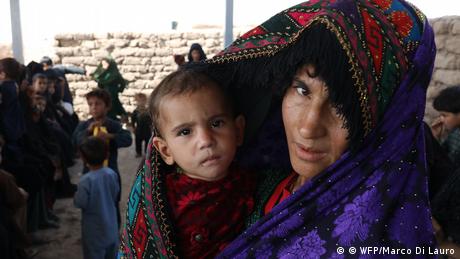 Millions of people in Afghanistan are facing a dire situation as they struggle to cover their basic needs, David Beasley, the executive director of the UN's World Food Program (WFP), told DW's Giulia Saudelli.

"Afghanistan was already one of the poorest countries in the world, with 20 years, at least, of conflict with the Taliban," said Beasley.

"And now what we're facing is catastrophic. The number of people that literally are knocking on starvation's door is 23 million people out of 40 million people."

The situation in the central Asian country has deteriorated since hard-line Taliban militants took power last August, resulting in the loss of important sources of foreign aid.

Beasley told DW of the case of a woman he met in Afghanistan who had been forced to sell her daughter to another family in the hope that they could feed her better.

Although Western forces have left the country — in what has been seen as a rushed and chaotic departure — many charities and aid groups have remained to keep supporting locals, often at the request of the Taliban themselves.

The Taliban had given assurances and allowed the WFP to operate "independently" and "impartially" in Afghanistan, Beasley said in response to a question about access, adding, "they've honored that. We've been able to operate, do what we need to do to reach the innocent victims of this conflict."

However, Beasley explained that access was not the major hurdle the WFP is facing, but rather funding.

He called on the world's richest to help solve the current hunger crises. "During this COVID experience, the world's billionaires have made unprecedented money. Over $5.2 billion [€4.67 billion] of net worth increase per day."

"All we need is one day's worth of their net worth increase to really address our short-term crises," the WFP chief said.

But humanitarian aid is not a sustainable solution, said Beasley. "The long-term solution is going to be the international community figuring a path forward so that Afghanistan can revitalize this economy and move on with its life," he said.

Before the withdrawal of Western forces, the US-backed government in Kabul had relied heavily on foreign aid, largely coming from Washington. With the Taliban in power, that has dried up.

The Taliban have been taking part in meetings with representatives from the US and other countries in Norway in a bid to have some $10 billion of Afghan assets unfrozen.

The militants have said the money is needed to tackle the humanitarian crisis, while Western diplomats have said that they want guarantees that women's and minority rights will be respected.