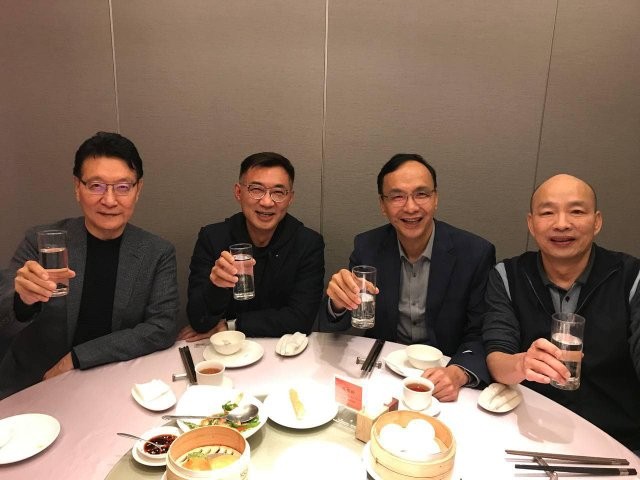 Former Kaoshiung Mayor Han Kuo-yu (韓國瑜) invited KMT Chairperson Eric Chu (朱立倫), former KMT Chairperson Johnny Chiang (江啟臣) and head of Broadcasting Corporation of China Jaw Shaw-kong (趙少康) to join in the get-together. Jaw said sitting together and eating symbolizes unity and that unity should not only be talked about, but enacted through actions like this, according to a CNA report.

Jaw said that the next election or who may run as the party’s candidate in 2024 did not come up at the table. Instead, the four chatted about so-called “light-hearted topics,” he claims, such as whose hair is growing longer or whose is shorter.

The meal began at 7 p.m. and finished at 9 p.m. Only these four men were present, and no others, per CNA.

Jaw says the KMT needs to pull together and that the party’s candidacy should be given to the most suitable person. Only through delegating effectively can the party win, he says.

If the party loses, however, it will have nothing, he says. Therefore, KMT leaders must not become divided over who may be the election candidate in 2024.

New Taipei Mayor Hou Yu-ih (侯友宜) was notably absent. Asked whether Hou would be invited next time, Jaw said Hou can come if he would like to.

The KMT has been riddled by infighting recently. After its quadruple defeat in all four referendum proposals in December, accusations surfaced Jaw called Hou a “war criminal” while live on air for Hou’s apparent lack of enthusiasm for the referendum campaign.

Party unity has also been threatened by the rise of the so-called “fighting blue” faction (戰鬥藍), nominally led by Jaw, which some analysts believe caused the party’s referendum rout. There have also been widespread calls for Chu to step down from the position of chairperson due to his apparent weak leadership.