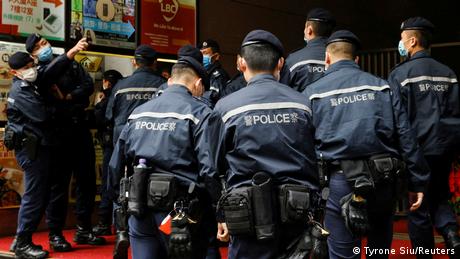 Journalists in Hong Kong are facing a massive government crackdown, which has forced many news organizations to shut down their operations. It has also resulted in many journalists losing their jobs.

The crisis is not limited to media organizations and journalists; journalism teachers and trainers are also facing the brunt of the clampdown.

Under pressure from authorities, media studies teachers are unsure what to teach in the classrooms.

Zhao (name changed due to security concerns) is a part-time journalism lecturer at a university in Hong Kong. He told DW that while the university management didn't tell teachers to not teach certain topics, teachers are aware of what can't be said and what needs to be expressed in a veiled manner.

Zhao says he tells his students to be careful when covering "sensitive topics" for class assignments.

"During the Hong Kong media heyday in the 1990s, journalists could ask any question directly while reporting a topic," he said, adding that they didn't have to worry about violating media laws.

Yuen Chan, a journalism lecturer at City, University of London, fears that journalism education in Hong Kong is likely to come under more pressure in coming years.

"I think the challenge is going to be how to uphold the principles of journalism without falling foul of the law and worrying about the red lines," she told DW.

Journalism teachers say it is becoming increasingly difficult to define the red lines regarding freedom of expression.

Tai (name changed), who teaches news editing and management at a university in Hong Kong, told DW that some teachers may choose to make significant adjustments to their teaching materials out of security concerns.

"For instance, some examples that the teachers previously used in the class may now violate the National Security Law (NSL), so they use other examples to teach certain skills in the classroom," he said.

Tai admits that in the past two years, he, too, adjusted some parts of his teaching materials. "For example, Hong Kong's local media used to offer a wide range of perspectives that I could use in the classroom to explain journalism theories, but since the city now lacks perspectives in certain areas, I can only use materials offered by the international media," he said.

Chiaoning Su, a journalism professor at Oakland University in the United States, says many of her former colleagues have left Hong Kong.

"Those who are still there face an impossible task: teaching the core values of democratic journalism," she told DW.

Lokman Tsui, a former assistant professor of journalism at the Chinese University of Hong Kong (CUHK), agrees with Chiaoning. "Journalistic values are very important. It is getting more difficult to teach them because of the direction that the government has taken," he said.

Tsui says it is now a challenge for media educators to encourage their students to become journalists. "As a teacher, you want to encourage your students to contribute something to society. But how do you do that when journalism has become unsafe?"

Two years ago, journalism was a popular subject at Hong Kong universities, and the number of applicants for journalism departments had grown substantially. The situation is rapidly changing now.

Journalism lecturers and communication departments at public universities are now pondering how to adapt to the changing political landscape in the city.

"University operations are supported by the government, so if they don't comply with the rules, they don't have any future in Hong Kong," said Zhao.

Yuen Chan says that some journalism schools are shifting their focus to advertising and media marketing. "Many journalism departments are offering courses in public relations, marketing, and creative industries. We may see more of these things in the future."

Despite these challenges, Zhao says he is not ready to give up on his ideals. "The media's role in monitoring the government will not change because of the crackdown," he said.