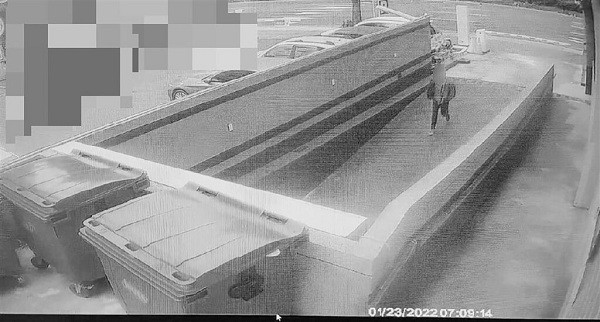 The man had returned to Taiwan from China on Jan. 12 and was staying at a quarantine hotel in Nantun District, Taichung Civil Affairs Bureau Director Wu Shih-wei (吳世瑋) said on Wednesday during a press conference, CNA reported.

However, early Sunday morning, the hotel contacted police to report that the man had left his room in violation of quarantine rules. After receiving the report, police went to the scene to investigate.

Police found that the man was indeed not in his hotel room, according to Wu. They called the cell and the home phone numbers he had provided but were unable to reach him, Wu added.

Police then reviewed the hotel’s surveillance footage, in which the man can be seen stepping out of his room at 12:28 a.m. then alternating between taking the elevator and the stairs until he reached the basement parking lot and left the building, according to the report. The footage showed that he did not return to his room until 7:10 a.m.

As the evidence of the quarantine violation was clear, the Nantun District Office reported the case to the city’s health bureau, which sent the man to a centralized facility to spend the remainder of his quarantine.

The violation was severe, as the man had left his room for over six hours, Wu said, adding that he is therefore being fined NT$300,000 in accordance with the Special Act for Prevention, Relief and Revitalization Measures for Severe Pneumonia with Novel Pathogens, per CNA.