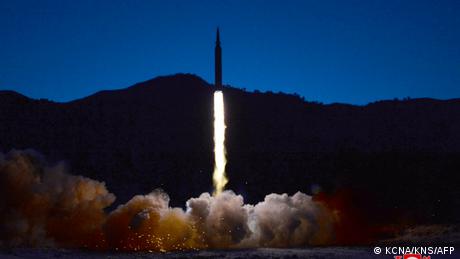 South Korea's military said on Thursday that its northern neighbor has fired two suspected ballistic missiles into the sea off its east coast.

Seoul's Joint Chiefs of Staff (JCS) said the missiles were launched in an eastern coastal region and traveled for about 190km to a maximum altitude of 20km.

In a message sent to reporters the JCS said: "Our military is keeping close tabs on related North Korean movements and maintaining a readiness posture."

The launches are Pyongyang's sixth missile tests this month. North Korea's previous launches this month include two suspected cruise missiles on Tuesday and what it said were hypersonic missiles on January 5 and 11.

The last time Pyongyang's weapons testing reached this level was in 2019, after the collapse of talks between North Korean leader Kim Jong Un and Donald Trump, the US president at the time.

North Korea's recent tests are the biggest cluster since 2019. They have prompted concern from UN Secretary General Antonio Guterres and from states in the region.

The Biden administration has indicated that it is open for talks, provided Pyongyang controlled its missile tests and abandoned its nuclear weapons.

Kim has also expressed willingness to continue talks, if the US drops "hostile policies" such as sanctions and military drills.

Earlier this month the US imposed sanctions on five high-level North Koreans with connections to the country's ballistic missile program.

The five individuals targeted were "responsible for procuring goods for the DPRK's weapons of mass destruction and ballistic missile-related programs," according to a US Treasury statement.