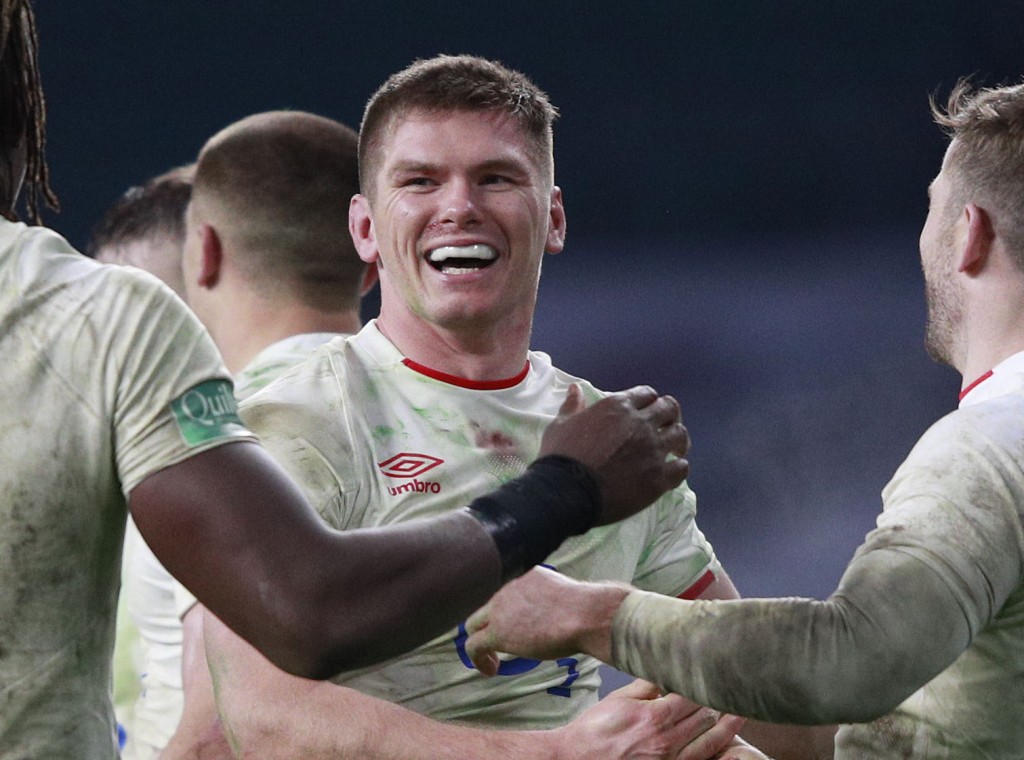 England will be without its captain — and possibly its leading try-scorer, too — for the entire Six Nations rugby tournament because of injury, a damaging blow to its bid to regain its status as the best team in the Northern Hemisphere.

England coach Eddie Jones delivered his injury updates on Owen Farrell and Jonny May on Wednesday, just 10 days before the start of the tournament. It further disrupts the team's preparations in the week his players were forced to change hotels in the middle of a training camp after a fire erupted from a manhole on the Brighton seafront.

Farrell, the captain and leader of the back division, was undergoing surgery Wednesday after hurting his right ankle in training with his club, Saracens, last week. Saracens said Farrell, who had just returned to fitness after a two-month absence with a left ankle injury, will be out for up to 10 more weeks.

"It’s a massive blow for him personally and for the team it’s a blow,” Jones said at the tournament's launch day in London. “But it’s obviously an opportunity for other guys to step up into leadership roles and for other players to play for that No. 12 jumper.

“We see it more as an opportunity. In today’s rugby, having your best team on the field is a rare occurrence. We’re pretty used to it."

That will not have made May's injury any easier to swallow, though.

The winger, whose 35 tries for England puts him second on the country’s all-time list, may also need an operation on a nagging knee problem that has flared up again ahead of the Six Nations.

“The details on that are a bit sketchy at the moment,” Jones said. “He’s more than likely to be out of the Six Nations.”

Even the player most likely to replace Farrell as captain is a doubt for England's opening match of the tournament against Scotland at Murrayfield on Feb. 5.

Courtney Lawes is currently going through return-to-play protocols after suffering a concussion in European Champions Cup match this month.

Jones said he was “hopeful” the flanker would be available but gave no assurances.

With prop Joe Marler testing positive for the coronavirus on Tuesday, England is having a fractured build-up to the Six Nations that saw more drama when a gas leak sparked a fire and forced the players to be evacuated from their hotel.

Jones at least saw the funny side of that.

“The players were going to have a team communication session, which is all about them talking about their goals and purpose and getting to know each other a little bit better,” Jones said. “There were billows of smoke coming out of a manhole and all of a sudden it lit up and a huge fire like a bonfire came out of the manhole.

“We had to evacuate the hotel and at one stage we were going to go to the Cotswolds and buy some sleeping bags."

Jones said his players had to “sleep in maybe uncomfortable beds last night.”

“But they’ve got to get on with it,” Jones said. “We enjoy those sorts of things. Every time we deal with it a little bit better. We had a similar situation with the typhoon in the 2019 World Cup when we had to move hotels quickly, so the guys have been in that situation before and they lead the way."

England was fifth in last year's Six Nations, which tied for its worst-ever finish, after losing to all three of its Triple Crown rivals — Wales, Ireland and Scotland.