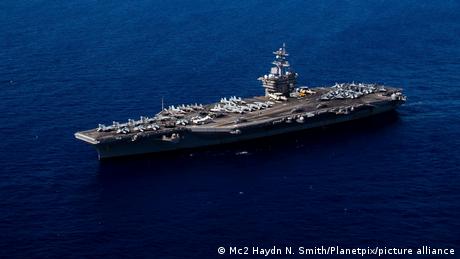 The US is conducting recovery operations in the South China Sea for a F-35C warplane.

The fighter jet crashed after a landing mishap on the deck of aircraft carrier USS Carl Vinson on Monday, said the US Navy.

"I can confirm the aircraft impacted the flight deck during landing and subsequently fell to the water," said Lieutenant Nicholas Lingo, spokesperson for the US 7th Fleet.

An unconfirmed media report claimed that the aircraft could fall into the hands of China. "We cannot speculate on what the PRC's intentions are on this matter," said Lingo about the report.

The pilot ejected and was safely recovered by a helicopter.

Seven military personnel, including the pilot, were injured. Three were evacuated for medical treatment in Manila, Philippines, while four were treated on board the ship. Those taken to Manila were in stable condition, as of Tuesday morning.

Details of the accident were still being verified, said Lieutenant Mark Langford of the 7th Fleet.

It was the second crash involving Lockheed Martin's F-35 aircraft in just over two months. In November, an F-35 from Britain's HMS Queen Elizabeth had crashed into the Mediterranean Sea.

Two American carrier strike groups with more than 14,000 sailors and marines are conducting exercises in the South China sea, led by the Carl Vinson and USS Abraham Lincoln.

The aim is to demonstrate the "US Indo-Pacific Command Joint Force's ability to deliver a powerful maritime force," Langford told AP news agency.

The US and its allies have stepped up exercises in the South China Sea recently in what they call freedom of navigation operations in line with international law, due to China's territorial claims in the region.

On Sunday, Taiwan's Defense Ministry reported China flew 39 warplanes toward Taiwan in its largest such sortie of the new year.