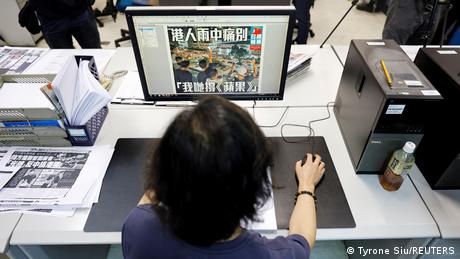 Anita can still vividly recall the feeling of traumatization that she had when she saw notifications about news from Hong Kong on her phone in the early months of her life in Taiwan.

She had left her job as a journalist in Hong Kong and moved to the island, just a few months after media outlet Apple Daily — one of the most vocal critics of the Chinese and Hong Kong governments — was forced to shut down.

"I tried to escape from the news about Hong Kong because I was traumatized by what happened to Apple Daily," she said while drinking a coffee at a cafe in downtown Taipei. "Even if I wanted to read about Hong Kong, I would choose news about sports or entertainment."

Fearing for the safety of her family and herself, she asked that DW not use her last name.

During her short stint as a journalist in Hong Kong, she had witnessed the dramatic change that her hometown was going through.

From the peaceful march during the early stage of the anti-extradition bill protest in 2019 to the siege at the campus of the Hong Kong Polytechnic University, Anita says those experiences were "quite enough" for her.

'A part of Hong Kong's history has been taken away'

Among those experiences, nothing affected her more than the series of forced closures of some of Hong Kong's most prominent pro-democracy media outlets since June 2021.

Apple Daily was forced to close down after police froze $2.3 million (€2 million) of its assets and raided its office. Several of its executives, including founder Jimmy Lai, were arrested and charged under the National Security Law.

Then in December 2021, authorities went after another prominent pro-democracy online media outlet, Stand News, arresting several of its top executives and freezing its assets. Stand News was also forced to shut down.

Days after this closure, Citizen News, one of the few remaining independent media outlets in Hong Kong, also ceased operations, citing the closure of Stand News as the main reason.

The incidents left Anita wondering where she could get "real news" from Hong Kong in the future. "I felt really sad about the situation," she told DW.

"Everything was deleted from the websites, YouTube channels and social media accounts of these media outlets soon after they ceased operations. All the great reports were wiped off the internet. It's like a part of Hong Kong's history has been taken away," she added.

The rapid disappearance of independent media outlets is not the only thing that bothers Anita. As a former journalist in Hong Kong, she also describes the deep sense of "survivor's guilt" as other journalists in the city try to figure out their next moves.

"I worry about my colleagues in Hong Kong," she said. "They lost their jobs within a week, and most of them had been working in this industry for their whole life, so what should they do next?" she said.

"Meanwhile, I am quite fortunate to be living in Taiwan. And when I see them facing struggles in life from here, I don't know what I can do to help them."

To Anita, the high degree of freedom of the press in Taiwan allows Hong Kong journalists to continue their way of life. "At least Taiwan has a free press and people here still care about Hong Kong," she told DW.

"The news media in Taiwan still reports on stuff related to Hong Kong, so I think that's good. And when Taiwanese people knew I used to be a journalist in Hong Kong, they would always show me sympathy," she added.

Anita is not the only Hong Kong journalist who has moved to Taiwan over the last year.

Some believe Taiwan can serve as an ideal base for Hong Kong journalists who prefer to stay in the region.

"Taiwan's journalists enjoy the highest level of press freedom in Asia, and Taiwan's geographic proximity to nations threatening those freedoms makes it an ideal outpost," said Chiaoning Su, a Taiwanese journalism scholar at Oakland University in the United States.

However, Su also cautions that Taiwan's media environment could make it hard for Hong Kong journalists to get their voices heard. "It is clear that Taiwan has its own lens to cover Hong Kong, either as a statement for or against China," she told DW. "Hong Kong journalists may find it difficult to have their voices heard in this polarized media environment."

"When Hong Kongers are writing about the city from the outside, it's still different from the foreign media's coverage on Hong Kong, because we will choose different perspectives and our choice of words will also be different," she said.

"The question is about sustainability. I'm not sure if people in Hong Kong will subscribe to a news outlet that was started by Hong Kong journalists outside the city, whether they would be viewed as violating the [security law] or not," she added.

Anita says she expects the situation in Hong Kong to in the near future become similar to that in mainland China, as journalists in the city try to report on sensitive topics in a more veiled way, while Hong Kong journalists abroad are more critical in their reporting.

"I think it's important if journalists in Hong Kong can still report on key issues, even if it's in a vague manner," she said. "It's crucial for them to keep testing the government's red line in this way."

At the same time, journalists outside of Hong Kong can focus more on hard-hitting stories related to Hong Kong," she added.

Journalism scholar Chiaoning Su believes there are possibilities for Hong Kong journalists to collaborate with media outlets in Taiwan that are known for in-depth reporting.

"If Hong Kong reporters can collaborate with these Taiwanese media, they may be able to provide in-depth content with a richer context," she said.

"It is this kind of content that will continue to keep the issues of Hong Kong alive and advocate for support."

"When these issues slip into the forgotten, that will truly be the end of Hong Kong," she added.

While Anita thinks the current situation in Taiwan is ideal for Hong Kong journalists, she remains unsure about the long-term prospects of the island, citinga possible change of government as her main concern.

"If the more China-friendly party wins the presidential election in the future, I'm not sure if Hong Kong journalists would still want to use Taiwan as a base to report on the city," she said.

She also remains unsure about whether she still wants to be a journalist in the future or not, after witnessing the rapid decline of freedom of the press in her hometown.

"I need to take more time to think about my future," she said. "Since I have the luxury to be in a free country like Taiwan, I should try to explore something else, rather than limiting myself to journalism."