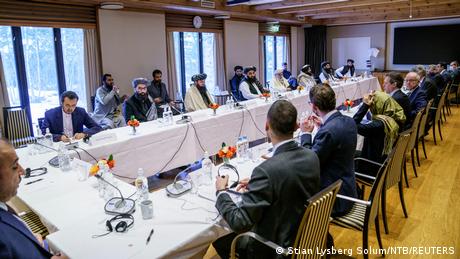 Norwegian authorities have said the ongoing international talks with the Taliban are not tantamount to legitimizing the Islamist group. But human rights activists, particularly those from Afghanistan, do not agree with these claims. They have slammed Norway's decision to host the militant group, which seized power in Afghanistan last August.

The Taliban, however, are hailing the Oslo talks as an "achievement." At the end of the first day of talks on Monday, a Taliban official told the AP news agency that the meetings were a "step to legitimize the Afghan government."

Amir Khan, the Taliban's foreign minister, said after meeting with envoys from the US, France, UK, Germany, the EU and Norway on Tuesday that "Norway providing us this opportunity is an achievement in itself because we shared the stage with the world."

The West faces a dilemma: It accuses the Taliban of continued human rights abuses in Afghanistan but at the same time understands that engaging with the Islamic fundamentalist group is now more important than ever.

The main reason behind this engagement is the unprecedented humanitarian crisis in Afghanistan. Earlier this month, the United Nations made the "biggest-ever appeal" for humanitarian aid for a single country, saying it needed $4.4 billion (€3.9 billion) for Afghanistan to prevent the "world's most rapidly growing humanitarian crisis" from deteriorating further.

For that reason, Norwegian Foreign Minister Anniken Huitfeldt stressed that the international community "must talk to the de facto authorities in the country" as it "cannot allow the political situation to lead to an even worse humanitarian disaster."

Taliban cashing in on humanitarian crisis

But engagement with the Taliban can prove to be a slippery slope for the West. The group seeks recognition and financial aid for its government, and it can use the humanitarian crisis in the country as an excuse to attain that.

"The Taliban are using Afghanistan's humanitarian crisis to stay relevant. They have convinced the international community to engage with them directly, and the Oslo meeting is a good example of that," Mohammad Shafiq Hamdam, a political analyst and former adviser for NATO in Afghanistan, told DW.

Shamroz Khan Masjidi, a former lecturer and political analyst, believes the group has intensified its diplomatic efforts to gain recognition for its rule.

Hamdam warned that the international community should remain cautious in its dealings with the militant group. "Afghans have not recognized the Taliban as their rulers. There shouldn't be any discussion to recognize the Taliban without holding elections in Afghanistan. There should be an inclusive government respecting human rights in the country," he said.

Most Afghanistan observers believe it is unlikely the Taliban will uphold human rights values. But does that mean the West should wait for the Islamist group to comply with its demands before it does something to avert the humanitarian disaster in the war-ravaged country?

About 8.7 million people are "one step away from starvation," Mary-Ellen McGroarty, head of the World Food Programme in Afghanistan, said last October.

Afghans are facing acute hunger, combined with a severe drought and the coronavirus pandemic. Millions of Afghans are currently jobless, and their bank accounts are frozen. Many Afghans are selling possessions to buy food, and urban communities are facing food insecurity at levels similar to rural areas for the first time.

Salahuddin Ludin, a political expert in Afghanistan, told DW that life has become "extremely difficult" for most Afghans. "International aid organizations have left the country. The Taliban are unable to pay the wages to government employees. The public health care sector is in a disarray," he pointed out.

Lal Gul Lal, former head of Afghanistan's Human Rights Organization, said the country was facing a humanitarian crisis long before the Taliban came to power and the situation had deteriorated further in the past few months.

Apart from the suffering of the rural population, even Afghans based in cities are finding it impossible to make ends meet.

The international financial sanctions will hurt the Taliban to an extent, but they have had a terrible impact on common Afghans, Lal said.

No blank cheque for the Taliban

Analyst Hamdam says the Taliban might succeed in convincing the international community to unblock some of Afghanistan's frozen assets. "But the West should not provide them with any blank cheque. The assistance must be direct to the Afghan people, and the release of funds must be conditioned to the Taliban's response to people's demand to establish an inclusive government and respect human and women's rights."

It is understandable why the Taliban feel emboldened by the Oslo talks, but former lecturer Masjidi says the group's diplomatic success depends on its cooperation with the international community.

"The international community must hold the Taliban accountable and force the Islamists to allow girls to go to schools and universities. They also need to cut ties with terrorist organizations if they want international recognition," Masjidi said.

Ali Maisam Nazary, the head of foreign relations for the National Resistance Front (NRF), an opposition group in Afghanistan, criticized Norway for hosting the talks.

"We all must raise our voices and prevent any country from normalizing a terrorist group as the representative of Afghanistan," Nazary, who is based in Paris, wrote on Twitter on Friday.