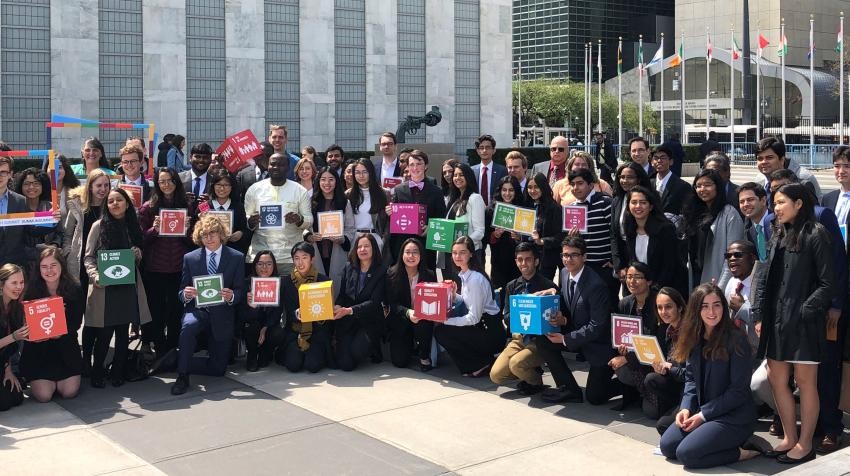 TAIPEI (Taiwan News) — Though China has the political clout to block Taiwan from regaining membership in the UN, it holds no power over the half a million high school and college students around the world who organize and participate in Model United Nations conferences each year.

These students can and should make a commitment to giving Taiwan representation at future conferences. A growing international student movement could potentially inspire progress at the UN, ultimately leading to the restoration of Taiwan's membership.

Model UN is a simulation of the real organization in which students attempt to generate solutions to global problems while attempting to faithfully represent the views and interests of the countries they have been assigned. Conferences typically last two to three full days and involve the gathering of many schools, often across international borders.

I am a teacher and Model UN adviser at an international school. In the past year, my students have participated in four online conferences in three different countries.

As my students know very well, I am a passionate supporter of Taiwan and like to share related information. When the 76th UN General Assembly was meeting last September, I told my students about “Give Taiwan a Voice,” a billboard campaign in New York City’s Times Square, which is just a mile down the road from the UN headquarters. The campaign advocated for Taiwan’s inclusion in the United Nations.

I also told my students about US Secretary of State Blinken’s press statement calling on all UN member states to support Taiwan’s “meaningful participation in the UN system,” along with similar statements echoed by the governments of France and Germany.

After sharing this information, it naturally prompted discussions about whether our model UN club could do anything to realistically support Taiwan in its struggle for UN membership. One day, a feasible idea emerged.

As I was filling out the registration form for our next conference, I was required to specify our club’s country preferences. Each student could request a particular country that he or she would like to represent. Taiwan was not listed on the dropdown menu of countries, but it was of course the first country that popped into my mind.

I told my students that, although Taiwan was not listed, if any of them were willing to represent Taiwan, I would send an email to the conference organizers to make a special request.

I immediately had a volunteer, so I sent out an email. Personally, I thought there was a fifty-fifty chance that the organizers would say yes.

It turns out that I may have underestimated the probability. I was surprised by the enthusiasm with which the organizers—who were all students—accepted our request. The Secretary-General sent me an email saying, “We are deeply aware of the current diplomatic situation between China and Taiwan, and as a student organization we feel honored to provide a place to give Taiwan a voice. Thank you again for bringing this to our attention.”

To make sure that they knew the potential consequences, I sent them an article, “Chinese Students Go Ballistic at Model UN Event,” about a Harvard conference that made national news headlines in the US in 2015. The conference's handbook had included Taiwan on its list of “international participants by country" because some of the participants from Taiwan had named it as their country. When some Chinese students noticed, they protested in outrage. They insisted that Taiwan was not a country and demanded that all of the handbooks be corrected. They became so hostile that the Harvard organizers threatened to call the police and instructed hotel security to escort them out of the building.

After I shared this information, I was a little worried that the upcoming conference organizers might change their minds about letting our club represent Taiwan. However, the Secretary-General told me that her team was already aware of the 2015 Harvard conference and that she knew someone who was actually there.

To put me at ease, she said her team will be “closely monitoring meetings” and “if a delegate makes a comment that personally attacks another participant, they will receive a warning and may be expelled from the conference if the behavior continues.”

I was thinking, “Wow! If only we could see this kind of leadership demonstrated by the adults at the real UN!”

I later asked my students how they felt about making a commitment to request the inclusion of Taiwan at every model UN conference that we participate in going forward. It would take essentially no extra effort from us, just the courage to send an email and say, “Our club is willing to represent Taiwan, if you will let us.”

Everyone agreed that this was a good idea. Since that time, I have been in contact with two more conference organizers who have been receptive to the idea of including Taiwan.

By sharing all of the above information, I hope it will inspire other students, especially Taiwanese students, to believe that they are capable of making a difference. If enough international high schools and universities are willing to commit to supporting Taiwan’s inclusion in model UN conferences, Taiwan’s representation could eventually become normalized, which would undoubtedly impact the thinking and possibly the votes of member states at the real UN.

This year, before the 77th Session of the UN General Assembly takes place on September 13-27, our club is interested in collaborating with other schools to organize a Model UN conference in which students have an opportunity to debate and attempt to pass a resolution to restore Taiwan’s UN membership.

There are many complicated issues to take into consideration, such as whether to abandon the name "ROC," but the method for restoring Taiwan's UN membership is straightforward. It would require convincing a majority of countries to vote to repeal or amend Resolution 2758, passed by the General Assembly a half-century ago in 1971. China’s Security Council veto would be powerless to stop it.

I believe that if students initiate debate on this subject and turn it into an annual event, it would be impossible for world leaders to ignore. Perhaps it would open their minds.

Any schools that are interested in collaborating to get this project off the ground can send an email to TaiwanModelUN@gmail.com.

Taiwan News agreed not to use the real name of the writer.