TAIPEI (Taiwan News) — A Chinese author’s revelation on social media about how many renowned movies’ endings were censored and changed to “wholesome” endings sparked a wave of discussion among netizens about the ‘absurdity’ of censorship in China.

On Sunday (Jan. 23), Chinese author Raist shared on Weibo, “I just found out that a video platform in China added an ending to ‘Fight Club’ that makes one unable to hold in criticism… So it turns out they don’t just delete things; they add things, too.”

According to the author, in China’s version of the cult classic, the film’s iconic final scene is completely cut out. In the edited scene, members of an anti-corporate organization blow up multiple buildings as the protagonist, portrayed by Edward Norton watches on with his love interest, portrayed by Helena Bonham Carter.

In grammatically-incorrect English, text on a black screen takes its place, reading, “Through the clue provided by Tyler, the police rapidly figured out the whole plan and arrested all criminals, successfully preventing the bomb from exploding. After the trial, Tyler was sent to lunatic asylum receiving psychological treatment. He was discharged from the hospital in 2012.”

Raist blasted the video platform, relevant authorities, and the copyright holder for allowing such an “outrageous, ludicrous” decision. “This is not just castration; it is putting on an ugly, fake member after castration, making the entire film appear to be an artificially patched-together monster.”

He went on to name other classic films that received the same treatment.

In “Farewell My Concubine,” which ends with queer protagonist Cheng Dieyi (程蝶衣), committing suicide, text is inserted to explain that Cheng’s suicide attempt was unsuccessful. He is sent to the asylum instead, where a brilliant doctor cures him of lunacy and restores his ‘masculinity’ — he eventually marries and fathers three children, the text said.

The ambiguous relationship between hitman Leon and 12-year-old Mathilda Lando in “Leon: The Professional” is also “corrected.” Leon narrowly escapes death after detonating multiple grenades, adopts Mathilda, marries a woman, and fathers a son in the Chinese version. The family lives happily ever after.

At the end of “Lord of War,” instead of returning to his business of trading weapons after being released, Nicolas Cage’s character Yuri Orlov laments in a re-edited scene, “My family has disowned me. My wife and son have left me. My brother’s dead. I fully appreciate the seriousness of my situation.” A final note reads, “Yuri Orlove confessed all the crimes officially charged against him in court and was sentenced to life imprisonment in the end.”

“Don’t you think, when only ‘positivity’ is allowed in all works, the world becomes exactly the same as some things ‘Fight Club’ mocks?” he asked.

Under Raist’s posts, commentators responded in support. Xixixidou (席席席豆) wrote, “Everyone knows that in China there is no art, there is only morality.”

Weibo user SpringField3iFish wrote, “In the future, a special Chinese ending can be added: the protagonist opens his or her eyes and wakes up.” Others joked that by removing irony in American films, Chinese authorities are essentially banning criticism of the U.S. and even promoting the U.S. in a positive light. 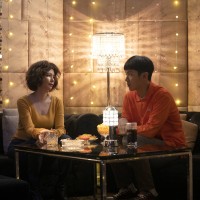