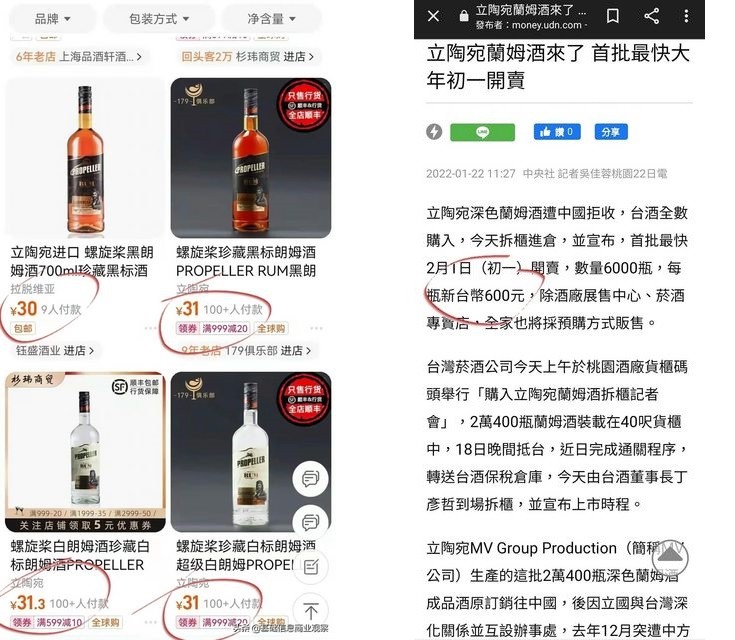 TAIPEI (Taiwan News) — Soon after criticism of the “high price” of Lithuanian rum in Taiwan compared to in China surfaced on social media, Taiwan Statebuilding Party member Chen Tzu-yu (陳子瑜) pointed out that the report behind the controversy came from a Chinese media company.

On Saturday (Jan. 22), the Taiwan Tobacco and Liquor Corporation (TTLC) announced that it will sell 6,000 bottles of Lithuanian dark rum at NT$600 (US$21.65) per 700-milliliter bottle. They will be the first batch from the 24,000 bottles the state-backed company bought after Lithuania's MV Group Production feared its shipment would be barred from entering China last month amid Chinese import blocks on goods from Lithuania to punish the Baltic country for its warming ties with Taiwan, per CNA.

By Sunday (Jan. 23), comments had surfaced on Facebook and popular online forum PTT criticizing or mocking the “high price” the TTLC set for the liquor compared to the NT$135 per bottle on Chinese e-commerce platform Taobao. While some netizens had already begun alerting others to the fact that this complaint originated in China, discussions became so heated that they prompted the TTLC to compare the costs and stress that the price is not unreasonable.

In a Facebook post, actor Lawrence Ko (柯宇綸) shared screenshots of online listings of the same rum in Lithuania and in Hong Kong, writing, “Someone is manipulating public opinion.” In Lithuania, a 500 ml bottle costs around NT$480, which Ko said is fair considering that is where the liquor is produced; in Hong Kong, the same bottle costs around NT$740.

On Tuesday (Jan. 25), Chen Tzu-yu wrote on Facebook that the pricing incident was created and fueled by a joint online operation between Chinese academia and industry. The first report comparing the prices of Lithuanian rum in China and Taiwan came from guancha.cn, a Chinese news and media company.

“After ‘guancha.cn’ publishes the news, social media platforms in Taiwan take over, coordinating fan pages, groups, and personal accounts to leave comments, thus directing the discourse,” Chen wrote, “which means that the Lithuanian rum incident is very likely another attempt by Chinese online operations to create distrust of the governments of Taiwan and Lithuania within Taiwanese society.”

Netizens on both Facebook and PTT also mentioned that the cheaper liquor sold on Taobao is likely fake. “Are you sure it’s not Chinese counterfeit liquor? The type that explodes?” a user asked.