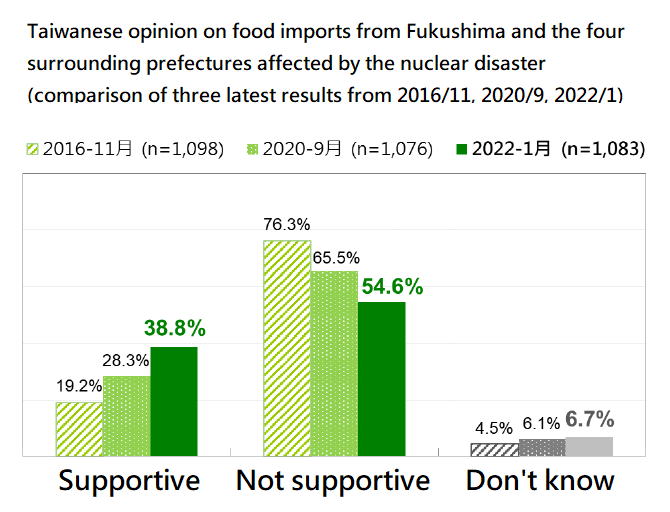 TAIPEI (Taiwan News) — Between September 2020 and January 2022, Taiwanese support for food imports from Fukushima has increased by 10.5%, while opposition has dropped by 10.9%, the Taiwanese Public Opinion Foundation (TPOF) found in a recent survey.

On Tuesday (Jan. 25), the TPOF announced the results of a poll conducted from Jan. 17-18. One of the questions in the survey read, "If the Tsai Ing-wen (蔡英文) administration decides to 'allow the import of agricultural and food products from Japan’s Fukushima and the four surrounding prefectures affected by the nuclear disaster with strict inspections in order to improve Taiwan-Japan relations,' would you support the policy?"

Of the respondents, 12.3% strongly supported the policy, 26.5% somewhat supported it, 17.5% somewhat opposed it, 37.1% completely opposed it, and 6.7% had no opinion, did not know, or did not answer. According to the TPOF, though the majority of Taiwanese still oppose allowing Fukushima food imports, compared to a survey from 2020 the results show a significant change in their attitude towards the issue.

The TPOF named three major reasons behind the change: Japan’s timely COVID-19 vaccine donations to Taiwan, the Japanese government’s continued concern and support for Taiwan’s security, and discussions of ractopamine-containing pork during the 2021 referendum. While the first two factors pertained to the Taiwanese perception of Japan, the pork referendum gave the Tsai administration the chance to offer a new and comprehensive argument that combined the topic of food imports with international trade and relations.

The survey targeted citizens over the age of 20 and was conducted via telephone, collecting 1,083 valid samples. The samples were adjusted according to the Ministry of the Interior’s latest census data to match the geography, sex ratio, age distribution, and education level of Taiwan’s population.