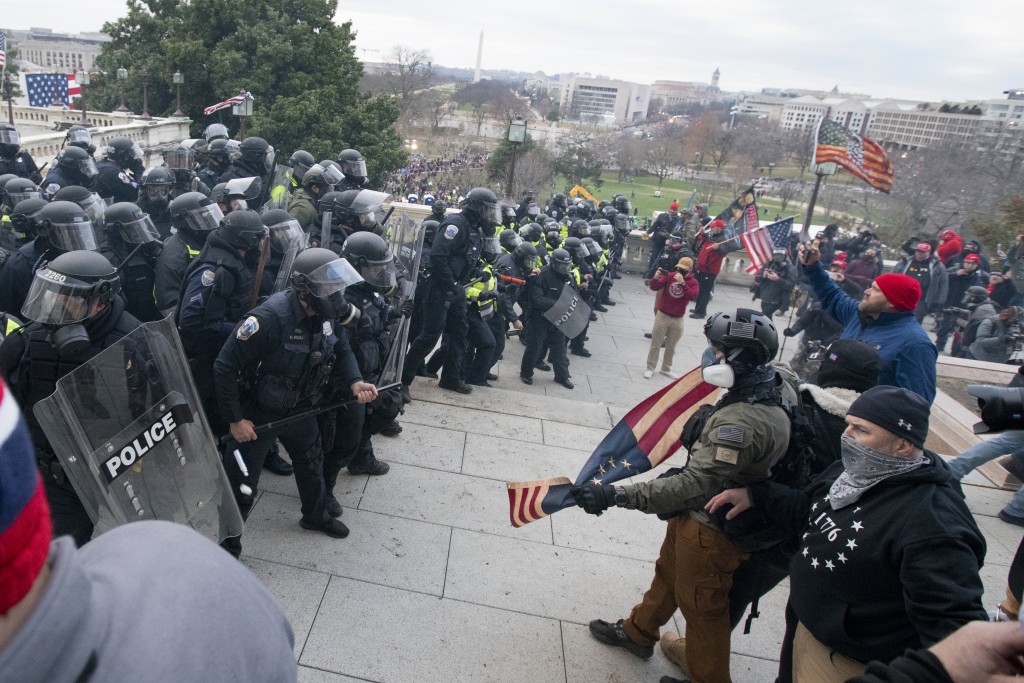 A pro-Trump social media influencer who posted video of himself at the U.S. Capitol during last year's riot was sentenced on Monday to three months of home detention after a federal prosecutor accused him of abusing his online platform to stir up the mob.

U.S. District Judge Dabney Friedrich said she finds it “deeply disturbing” that Brandon Straka, 45, used his social media influence to encourage and defend the Jan. 6, 2021, attack on the Capitol.

“Election challenges are fought in the courts, not by storming the Capitol,” Friedrich said.

The judge also sentenced Straka to three years of probation and ordered him to pay a $5,000 fine.

Also on Monday, a federal judge in Texas heard arguments on whether to jail the founder and leader of the far-right Oath Keepers militia group while he awaits trial on seditious conspiracy charges. U.S. Magistrate Judge Kimberly Priest Johnson said she expects to issue a written ruling in the next day or two on whether to detain Stewart Rhodes.

In the case of Straka, it was noted that his personal Twitter account has nearly 500,000 followers. Using his “significant public profile,” Straka encouraged others to storm the Capitol, to take a protective shield from a police officer and to “hold the line” even after he departed the Capitol grounds, a prosecutor said in a court filing.

“Even if he didn’t personally engage in violence or property destruction during the riot, Straka encouraged and celebrated the violence of that day,” Assistant U.S. Attorney Brittany Reed wrote.

Straka, a former hair stylist, founded the “#WalkAway Campaign” after posting a video that went viral in 2018. The video, titled “Why I left the Democrat Party,” has nearly 900,000 views on YouTube. He also chairs a tax-exempt nonprofit — the #WalkAway Foundation in Fairfax, Virginia — that reported more than $600,000 in revenue in 2019.

Straka told the judge that he and his social media followers don’t condone violence.

“It’s not who they are, and it’s not who I am, which is why they love our movement,” he said. “My relationship with my fans and followers is not just about politics. It’s about love.”

Prosecutors had recommended four months of home detention for Straka, a longtime resident of New York City. The Nebraska native pleaded guilty in October to a disorderly conduct charge, a misdemeanor with a maximum penalty of six months imprisonment.

More than 720 people have been charged with federal crimes related to the Capitol riot. Unlike most riot defendants, Straka isn't accused of either entering the Capitol building on Jan. 6, 2021, or engaging in violent or destructive behavior.

The judge, however, said Straka wasn't prosecuted or punished for his political views or personal beliefs.

“None of the criminal conduct to which Mr. Straka has admitted is covered by the First Amendment,” Friedrich said.

Essayli also said that when federal authorities interviewed Straka, they were “focused on establishing an organized conspiracy” between Straka, former President Donald Trump and Trump allies to disrupt the joint session of Congress on Jan. 6.

Straka “answered all questions truthfully and denied the existence of any such plot,” his lawyer wrote in a court filing.

After President Joe Biden won the 2020 presidential election, Straka frequently told his followers that it was time to “rise up” as part of a “civil war,” according to Reed, the prosecutor.

“Many of these messages contain rhetorical flourishes that are common in political speech. However, some of Straka’s references to concrete planning and action could reasonably have been interpreted by some readers as a call for more than just a figurative struggle,” Reed wrote.

Straka was scheduled to speak at a rally near the Capitol on Jan. 6, after Trump's speech near the White House. Straka learned that the Capitol had been breached before he arrived at the building.

A video captured Straka telling the rioters to “go, go, go” as they tried to enter the Capitol. Straka also can be heard saying “take it, take it” as rioters grabbed a shield from an officer.

Straka tweeted, “Patriots at the Capitol - HOLD. THE. LINE!!!!” after he left the area. Thousands of Twitter users liked or retweeted the message.

“Straka did nothing to display to these followers that his conduct was shameful. He even boasted about his conduct by posting about the riot the following day,” Reed wrote.

Straka made statements on social media that were “in retrospect irresponsible and potentially inflammatory,” but he hadn't witnessed some of the worst violence on the west side of the Capitol, Essayli wrote.

“Once understanding the full context of the events, Brandon retracted and removed his prior statements,” Straka's lawyer added.

Straka was jailed for two days after his arrest in Omaha, Nebraska, last January.

In the Texas case, Johnson heard arguments from federal prosecutors that Rhodes is dangerous, destroyed evidence of his alleged crimes and a is flight risk who could easily disappear with the help of his broad network of supporters.

Rhodes’ defense attorneys countered that the 56-year-old has no passport, has cooperated with investigators and that the actions the government claims were dangerous took place many months ago.

Defense lawyer James Lee Bright said Rhodes is being punished for his political opinion and called it “disingenuous” for the government to now claim he’s a risk after waiting a year to arrest him.