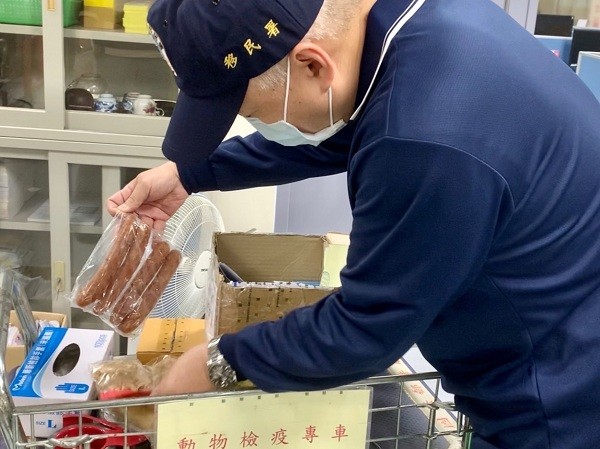 TAIPEI (Taiwan News) — A Thai man is in legal trouble after the sausages his girlfriend mailed him from his home country was found to be infected with the African swine fever (ASF) virus.

The National Immigration Agency’s (NIA) Kaohsiung City Brigade recently received a report from the Bureau of Animal and Plant Health Inspection and Quarantine that the bureau's mail processing center in Kaohsiung had intercepted a package of food from Thailand, including sausages contaminated with the ASF virus, CNA reported, citing an NIA press release published Monday (Jan. 24).

According to the brigade’s investigation, the parcel was addressed to the man, who came to Taiwan for work nine years ago and is currently employed at a steel plant in Kaohsiung’s Ciaotou District. The brigade arrested him after obtaining a warrant.

The man had not returned to Thailand for a long time, so his girlfriend sent him sausage, dried fish, spices, and other food items for him to enjoy during the Lunar New Year holiday, the report said.

Admitting he knew that foreign meat products are contraband in Taiwan, the man said he had wanted to try his luck by asking his girlfriend to send the items anyway. He said it had never occurred to him that they could contain the ASF virus, per CNA.

According to the brigade, prosecutors and the NIA will continue to investigate whether other such contaminated sausages had been snuck into the country. Illegally importing meat products from an epidemic area is punishable by up to seven years in prison and an additional fine of up to NT$3 million (US$108,000).