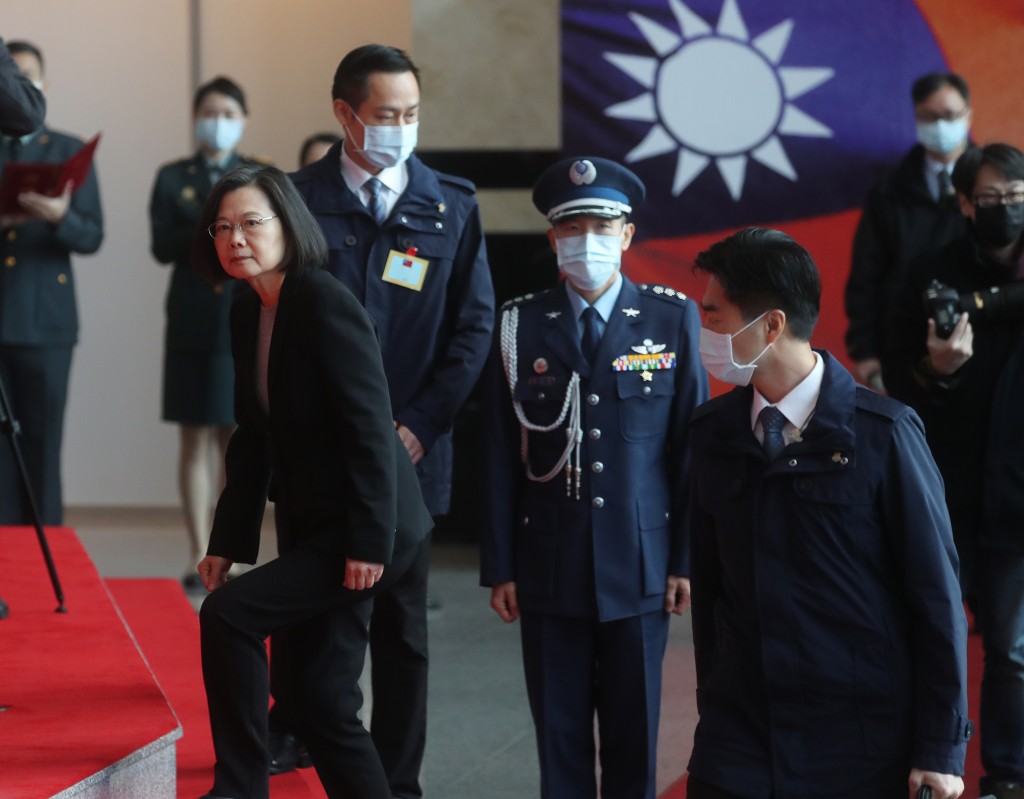 In October of 2011, then-presidential candidate and Democratic Progressive Party (DPP) Chair Tsai Ing-wen (蔡英文) botched the Republic of China (ROC) national anthem (ironically while standing next to her future vice president). It was one of many missteps in a feeble campaign that in the eyes of many cast doubt on her ability to be president of the very country whose anthem she seemed incapable of mastering.

Worse for the floundering candidate, the incident came only days after a very consequential statement (with 20/20 hindsight): “Today’s ROC is not a foreign government, it is a government of today’s Taiwan.” That was a startling statement by the candidate who had as recently as May taken the more traditional DPP approach to describing the ROC as a government-in-exile.

Considering this was only her second political campaign and that she was up against a seasoned and polished political professional in Ma Ying-jeou (馬英九), she did respectably but still lost. In 2016 she got her revenge, besting the very person who had beat her in her campaign for Taipei County (today’s New Taipei City) commissioner six years earlier: Eric Chu (朱立倫) of the Kuomintang (KMT), the party's current chair.

What wasn’t obvious to anyone in 2011 was that her statement was the first step in what has become nothing less than a complete re-imagining of Taiwan’s political landscape.

Her statement wasn’t too far from the stance the DPP reluctantly took in the late 1990s after it became clear their platform of declaring an independent Republic of Taiwan wasn’t the vote-getter they’d hoped for. The party’s 1999 “resolution regarding Taiwan's future,” declared that the ROC is already an independent nation and that any changes to the nation’s status and constitution would need to be approved by referendum.

Through most of her first term, that was the line Tsai took, famously telling BBC News that “Taiwan doesn’t need to declare independence,” as the ROC is already an independent nation. It was in her second inauguration speech, in 2020, that she began to lay out a surprising new vision for the country's political landscape — one that flew in the face of not only her base but also the KMT.

In her speech, she said “Taiwan” or “Taiwanese” 50 times and only referred to the ROC five times. Then, as she began her conclusion, she dropped this bombshell: “My fellow citizens, over the past 70 years, the Republic of China, Taiwan, has grown more resilient and unified through countless challenges.”

For a time she began to use "Republic of China, Taiwan," to refer to the nation — conjoining the concepts of the ROC with Taiwan as if they were one in the same. It now appears possible this was a transition formulation, as in this year’s New Year’s address she only referred to Taiwan and dropped any mention of the ROC entirely.

It was the “past 70 years” that tipped her hand, hinting she had something less cosmetic in mind. Seven decades years prior to her second inauguration was the curious date of 1950.

The Republic of China was founded on January 1, 1912, but the president was clearly and intentionally excluding the period the ROC ruled China and putting squarely into the frame of reference the period the ROC capital and government was already in Taiwan. This president of the Republic of China, Taiwan, was in essence saying the current political entity came into being only once it had reached Taiwan, suggesting that what came before was different, alien, or unimportant — she rooted the ROC on Taiwan soil.

Political analysts, including this one, believe her use of “70 years” was approximate rather than exact and that her intent was to reference the establishment of the capital of the ROC in Taipei in 1949. This is almost certainly correct.

This author considers another possibility in addition to this: the Treaty of San Francisco, which was agreed upon in 1951 and went into force in 1952. In this treaty, the Japanese Empire relinquished their claim to Taiwan but crucially did not state to whom sovereignty was being transferred, which is why to this day the United States and some other nations view Taiwan’s international status as “undetermined.”

Tsai's move was a bold and clever stroke. For the first time, the president of the country and the leader of the DPP were not just laying claim to the ROC as “Taiwanese.” The ROC was being cleaved in two — leaving the KMT the sole major party claiming the period the ROC was in China as theirs. From a KMT perspective, in a sense, the president and the DPP had “stolen” their legacy and repurposed it as belonging to everyone in Taiwan as a shared experience, which the president addressed in the same inauguration speech: “I want everyone to know that Taiwan has overcome countless challenges over the past 70 years, relying on not just one or two heroes, but thanks to countless heroes such as yourselves, working together to turn the wheels of history. You have helped make Taiwan a happy, safe, and prosperous place for generations to come.”

Exactly when Tsai came up with this new vision is unclear, but some tantalizing clues appear in the second half of her first term. For example, upon taking office in her first term, she championed successfully to create the Transitional Justice Commission (TJC) to deal with issues related to the White Terror and begin dismantling the symbols and vestigal remnants of the martial law era.

Initially, the TJC laid out bold plans to address issues as varied as the images on the coins and street names, in some cases even laying out timelines for these to be dealt with. By late in the president’s second term, however, many of those dates had quietly passed and the issues were dropped.

By claiming much of that symbology as now belonging to the nation collectively, including the DPP, then logically there is less incentive to incur the financial costs, hassle, and political distractions of removing them. This, of course, infuriates the deep pan-green (pro-DPP) base, but it moves the party closer to the middle ground of public opinion where the hassle of changing street names and the money seems more trouble than it's worth.

The TSJ, whose mandate is scheduled to expire this May unless it is renewed, has shifted focus to largely uncontroversial issues, such as compensation for White Terror victims and releasing documents from the period. So far no moves have been made to make major changes to the country’s symbology or expose perpetrators of the White Terror or their spies and collaborators.

Aside from opening up discussion on the fate of the Chiang Kai-shek Memorial and the slow, ongoing process of removing statues of Chiang from public facilities, very little has happened that has much impact on the general public. Even the discussions on the memorial seem geared towards finding the least controversial solutions, such as possibly turning it into a hall commemorating all past leaders of both parties, not just Chiang.

Then, last Friday, Tsai dropped another bombshell by partially re-habilitating Taiwan’s last true dictator, Chiang Ching-kuo (將經國) at the opening of a park and library dedicated to him, which was the subject of this author’s previous column. This happened in spite of the TJC she helped create openly calling for the park and library to stop honoring Chiang in the names of the sites.

President Tsai has begun the process of absorbing the legacy of both the KMT and the ROC into Taiwan’s history. In the past, the DPP would have avoided referencing anything positive — such as Chiang Ching-kuo’s 10 major infrastructure projects — because he was of the KMT, but now Tsai has opened the door to them doing so.

This absorbing the past is a strikingly genius political move. For one thing, it moves both the debate and the DPP to the center politically, as it is more in accordance with the way the average person views the past: more complicated, intertwined, and nuanced than the lens strong partisans on both ends of the political spectrum view it through.

It also further marginalizes the KMT. As one local commentator put it after hearing the news about Tsai’s positive comments on Chiang: "What does the KMT have left?" With the DPP now an amorphous target that can no longer be counted on to automatically react with vitriol at the mention of Chiang Ching-kuo and the history of the KMT and ROC in Taiwan in all its forms, that is a good question. The answer is: quite a lot, and little of it good.

What truly sets Tsai Ing-wen apart is her remarkable ability to disarm, neutralize, and absorb some enemies — and marginalize the rest (the subject of an upcoming column). She appears to be counting on — and the KMT still seems to plan on obliging her — the opposition party moving further and further outside of the mainstream of Taiwan politics.

By co-opting much of the past, the KMT is left with the bits the DPP still won’t touch to claim as theirs exclusively. If Tsai succeeds in absorbing Chiang Ching-kuo, the party's history in China and Chiang Kai-shek are the two most obvious things that KMT hardliners will still cling to.

While those things are admirable and even heroic in the minds of the deep KMT base, they are not popular with the public at large. Yet, the party clings ever more fiercely to the things that define them and their heritage as different and unique.

This creates some opportunities for the DPP to pick up support from the previously more moderate supporters of the opposition party, but it also opens up opportunities for newer parties like the Taiwan People’s Party to move into the vacuum left by the KMT. Either way is a win for the DPP, a party whose very founding was built on bringing about the downfall of the KMT.