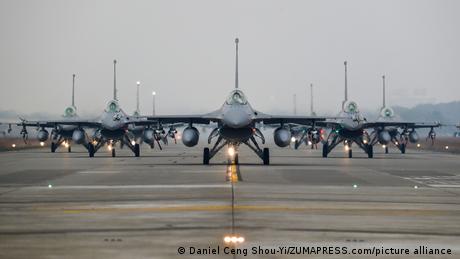 Taiwan reported on Sunday that 39 Chinese warplanes, including a bomber, were detected in the south-western Air Defense Identification Zone (ADIZ). The island's ADIZ is not the same as territorial airspace but instead is self-declared airspace that is monitored for national security purposes.

China considers Taiwan its own territory and has vowed to take the island by force if necessary. There was no immediate comment from Beijing on the latest developments.

What has Taiwan reported?

The island's ministry of defense said 34 fighter aircraft and an H-6 bomber were among the aircraft involved in the incursion.

According to flight paths the ministry officials posted online, Chinese aircraft flew to the northeast of the Taiwan-controlled Pratas Island.

In response, Taiwan scrambled its own fighter aircraft and broadcast radio warnings while air defense missile systems were deployed to monitor the activity, the ministry said in a statement posted on Twitter.

What is the US stance?

Sunday's alleged incursion was the largest since October 2021, when 56 aircraft were recorded entering the ADIZ.

In November, Taiwan again scrambled its own fighter jets after 27 Chinese aircraft entered the ADIZ.

Taiwan has complained for months of incursions into its ADIZ by China's air force, usually in the southwestern part near the Pratas Islands, which it controls.

The island's defense chiefs have accused Beijing of employing "gray zone" tactics to increase pressure on the Taiwanese military.

The US officially follows the "One China" policy and recognizes Taiwan as a part of China. However, Washington is also committed by law to ensure Taiwan can defend itself and to treat all threats toward it as matters of grave concern.

Beijing's military activity in the region has has led to growing tensions with Washington, who in turn has increased its military presence in the Indo-Pacific.