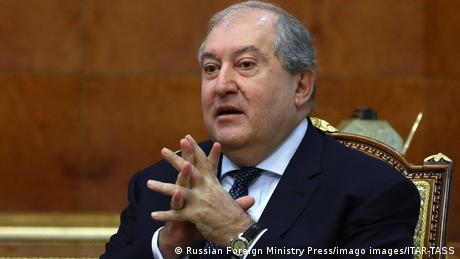 Armen Sarkissian announced Sunday that he was stepping down as president of Armenia, citing his inability to influence policy during times of crisis.

Armenia has been embroiled in a political crisis that erupted in the wake of a war with Azerbaijan over the disputed Nagorno-Karabakh territory.

Why did Sarkissian resign?

Sarkissian disagreed with Prime Minister Nikol Pashinyan over his decision to remove the chief of general staff in the wake of the war with Azerbaijan and amid protests.

Pashinyan removed Armenia's chief of general staff in March of 2021, claiming that the military was planning a coup.

Pashinyan has been under pressure since the peace deal that ended the war with Azerbaijan, with regular street protests demanding he step down over the terms of the agreement.

Under the 2020 deal brokered by Russia, Azerbaijan regained territory it had lost during a war in the early 1990s.

At the time the peace deal was being negotiated, Sarkissian criticized the fact that he had not been included in the deliberations.

'The president does not have the necessary tools'

"This is not an emotionally-driven decision and it comes from a specific logic," Sarkissian said in a statement on the website of the president of Armenia.

"The president does not have the necessary tools to influence the important processes of foreign and domestic policy in difficult times for the people and the country."

The post of president is largely ceremonial in Armenia, and executive power is held primarily by the prime minister. Armenia became a parliamentary republic after a 2015 referendum that significantly limited presidential powers.

"We live in a unique reality, a reality where the President cannot influence matters of war or peace," Sarkissian said in his statement, adding that the president did not have the power to veto laws.

"I hope that eventually the constitutional changes will be implemented and the next president and presidential administration will be able to operate in a more balanced environment."

The outgoing president was elected in 2018, having previously served as Armenia's ambassador to the United Kingdom. Sarkissian also held the post of prime minister in 1996-1997.