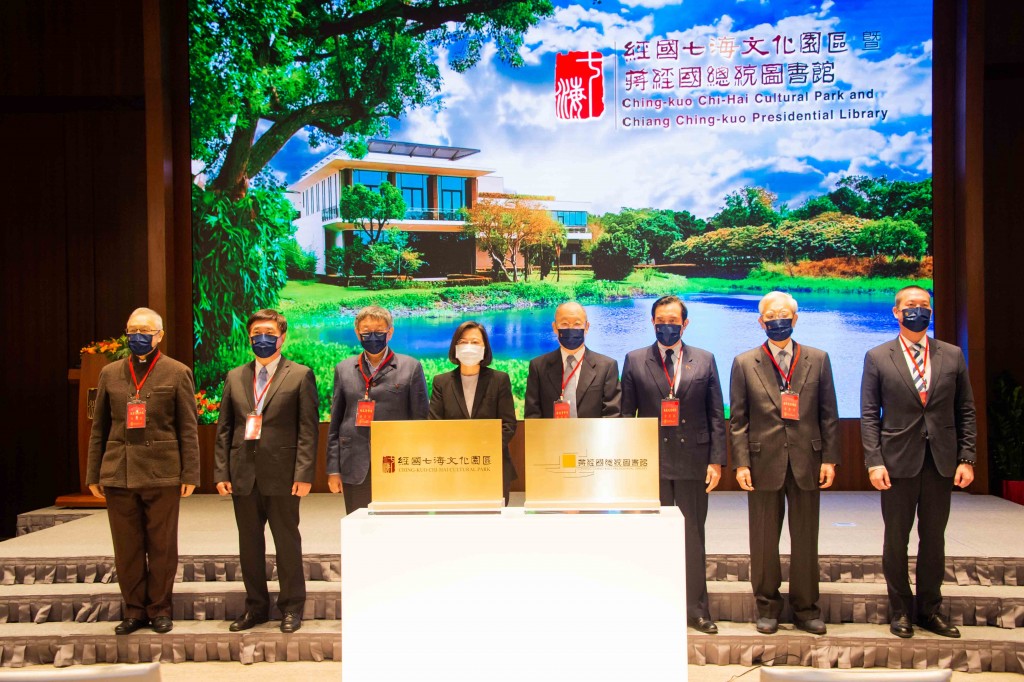 On Friday (Jan. 21), the Transitional Justice Commission issued a statement slamming the Taipei City Government for building and opening the Ching-kuo Chi-hai Cultural Park in conjunction with the Chiang Ching-kuo Foundation for International Scholarly Exchange. The attractive park in Taipei’s Dazhi features a pleasant lake house and the Chiang Ching-kuo Presidential Library and features the former dictator’s diaries and paintings, among other items and mementos.

The TJC, which is tasked with handling transitional justice related to the martial law era as well as removing symbols of authoritarianism, called on the park to be renamed and said that it qualifies as an authoritarian symbol under the Act on Promoting Transitional Justice (促進轉型正義條例). Further, they pointed out the park and library avoid the darker sides of Chiang's legacy: among other things, his role as head of the military intelligence that brutally enforced the White Terror, his signing off on assassinations of political opponents, and his begrudging moves towards democracy in response to external and internal pressures.

The Kuomintang (KMT) responded angrily to the TJC’s attack on their revered former leader, calling the TJC the “obstructing transitional justice commission” in a pun on its Mandarin name and accusing the Democratic Progressive Party (DPP) of “distorting history” and “defaming the two Chiangs” (which includes Chiang’s father, Generallissimo Chiang Kai-shek). They claimed that today, Chiang is the most fondly remembered and revered of Taiwan’s past presidents and reminded people of the economic miracle, the 10 major infrastructure projects, and encouragement of the founding of Taiwan Semiconducter Manufacturing Company (TSMC) — all of which occurred on his watch.

Clearly, the commission felt they were doing their job with their pronouncement — though one wonders why they waited until the day of the opening ceremony to say so — and from the language, one would presume it would be welcomed by those with pan-green (pro-DPP) sympathies. One rather important DPP figure, however, apparently didn’t get the memo: the party's boss and chair, President Tsai Ing-wen (蔡英文).

The opening of the park and the library was attended by, among many others, Taipei Mayor and Taiwan People’s Party Chairman Ko Wen-je (柯文哲), whose city government build the park; former President Ma Ying-jeou (馬英九), who once served as Chiang’s personal English secretary); grandson of Chiang, KMT lawmaker, and probable upcoming Taipei mayoral candidate Wayne Chiang (蔣萬安), who was notable for his very brief appearance; and of course, President Tsai herself.

In her speech, Tsai said she hopes the new library will provide information that allows Taiwanese society to have a deeper understanding and a fairer evaluation of Chiang and the nation’s history in order to help resolve social differences. Otherwise, some people will only remember the economic development and sense of security under Chiang’s rule, while others will only recall the authoritarian system that he maintained.

The president commented that Taiwan's post-war development should be recorded, as the nation can predict the future by reviewing the past. There are also mistakes worth learning from, she said, adding that through past events, the public can gain a deeper understanding of Chiang's place in Taiwan’s history and that it is up to the public to judge past presidents.

Jaw’s take was probably correct: The slap is more likely by the TCJ to President Tsai, as her administration had already signaled the administration’s shifting tone. The superb political scientist Nathan Batto, blogging at Frozen Garlic, broke the news that the Tsai administration’s deputy chair of the Veterans Affairs Commission had given an interview praising Chiang as far back as Jan. 13, using some of the same terms and references that both the president and the KMT used Friday.

To say that the president is fully embracing the legacy of Chiang Ching-kuo isn’t accurate, but for a DPP politician, she has taken a bold step. Looking closely at her comments, she is painting a far more nuanced and mixed picture of the legacy of the last of Taiwan’s true dictators.

What Tsai has done is, quite simply, take the position that many — if not most — Taiwanese have on Chiang Ching-kuo: he was a great builder and reformer as well as a dictator capable of ruthless crimes. While the two ends of the blue-green spectrum either hold him up as a saint or cast him down as a demon, most Taiwanese have a more complicated, nuanced view of his legacy.

This is a calculated political risk for Tsai but one very in character. This infuriates the hardcore KMT base, who claim Chiang's legacy as theirs alone — but as she encroaches on their territory among the less hardcore pan-blue supporters, the more the hardcore will double-down even more on their “unsullied” (by Tsai) legacy, further alienating the more centrist elements and pushing them into the hands of the Taiwan People’s Party or even the DPP camp.

Meanwhile, this will also infuriate many in her own base, quite a few of whom were either imprisoned under the Chiang regime or had friends and family who were. This is the part of the pan-green camp that supported the primary insurrection of Lai Ching-te (賴淸德) against Tsai in the runup to the 2020 presidential election and the ones that support the theory that the London School of Economics aided and abetted her in faking her thesis (never mind that she was an unknown daughter of a mechanic who’d managed to score some real estate money at the time).

Her move will encourage the further marginalization of the KMT, but she is running some risks within the DPP. She has, remarkably, brought the party's previously fractious factions under control, but as she moves further into lame duck territory — especially after this year’s local elections — these factions may yet erupt in infighting, and this issue may be one of the flashpoints.

Strategically, however, this is very much a part of a broader political re-alignment being systematically engineered by the president. That will be the subject of an upcoming column.