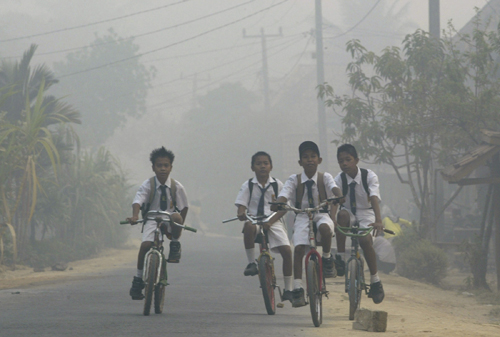 Take one last look at the government pollution Web site to check the air toxicity outside, then grab your keys and go.
This is the "haze routine" Singaporeans may dust off this summer if Indonesia's annual forest fires again smother the island in noxious yellow smoke.
"You just click refresh," said Yu Mei Balasingamchow, who checked a government pollution Web page before leaving her house every day last year as the pollution index rocketed to levels so unhealthy the government advised children, the elderly and people with respiratory problems to stay indoors.
Every May to October, southwest monsoon winds blow sulfur dioxide, nitrogen dioxide and particulate matter-laced smoke from Indonesia over down-wind neighbors Singapore and Malaysia.
It's a cross-border pollution bombardment that Southeast Asians have learnt to endure, as have millions of others in Asia where governments are struggling to stop their neighbors' annual dust storms, smoke haze and industrial air pollution.
From March through May, Koreans periodically don cotton face masks, swap contact lenses for glasses and seal up their windows as spring sandstorms from the Gobi Desert sweep through Beijing to redden the air across North and South Korea to Japan.
From November through March, north Asia masks up during the annual air pollution surge that comes as China fires up coal-burning power plants to supply winter heating.
After years of suffering, powerless "victim" states have turned pollution forecasting into a fine art, setting up sophisticated systems to predict transnational pollution invasions.
South Korea's Meteorological Administration texts "yellow dust" warnings to the public on their cell phones.
Hong Kong group Clear the Air, which says China contributes 50 percent of the territory's air pollution, publishes daily charts showing pollution not only in Hong Kong, but neighboring Guangdong province in southern China.
About 2,500 km south, Singapore television runs an air pollution ticker during haze months, and its scientists track looming clouds of smoke from Borneo and Sumatra with satellites.
"Last year Kalimantan haze came here on the wind, surprisingly, this year Thailand haze also came down. This kind of business has no political boundaries," said Leong Keong Kwoh, head of Singapore's satellite monitoring and imaging center.
Blame game
Unlike annual weather patterns such as typhoons and monsoons, pollution calendar events are preventable.
But regional efforts to stop countries from polluting their neighbors have been hindered by storms of accusations and counter-accusations over responsibility.
South Korea blames the failure to stop desertification in Mongolia's Gobi and China's northern Taklaman deserts for the ever-worsening sandstorms it dubs "yellow dust terrorism." Beijing, hit by 17 spring sandstorms in 2006, has pledged a sandstorm-free Olympics. But it blames Hong Kong for some of the air pollution in Guangdong because Hong Kong companies own polluting factories in the province.
Further south, Indonesia says Malaysian and Singaporean firms own several of the oil palm and timber plantations whose land-clearing fires blanket them in smoke.
Stalemate
With Indonesia refusing to sign the main regional response to the problem - the 2002 ASEAN Haze Pact - frustrated neighbors have no way to force it to clean up its act.
"The position in law is quite clear - the territorial sovereign has jurisdiction," said environmental law specialist Alan Tan, from the National University of Singapore.
"ASEAN was never designed to poke its nose into the internal affairs of individual members. You know you can't adopt something stronger because you know nobody would buy into it. So you settle for something weak, which obviously, because of its weakness, isn't working," he explained.
China's strongest sandstorms have already swept across the Pacific Ocean to irritate North America and Canada.
But it is the Indonesian haze that is set to become Asia's first truly global environmental headache, said ecologist Faizal Parish of Malaysia's Global Environment center.
The massive carbon emissions from peatland forest fires made Indonesia the world's third largest emitter of emissions linked with climate change, Parish said.
Under the world's only climate change agreement, the Kyoto Protocol, developing countries such as Indonesia are excluded from the first 2008-2012 round of emissions cuts.
"The delay until 2012 sends the signal let's be as bad as possible until 2012 - let's drain and deforest," Parish said.
It may be one pollution calendar date that comes too late.
"If we don't act in the next three to five years, the situation will have got so serious that we'll be faced with serious fires for the next 50 to 100 years," said Parish.
"There's 50 billion tons of carbon that will be released. It will get to a point of no return."