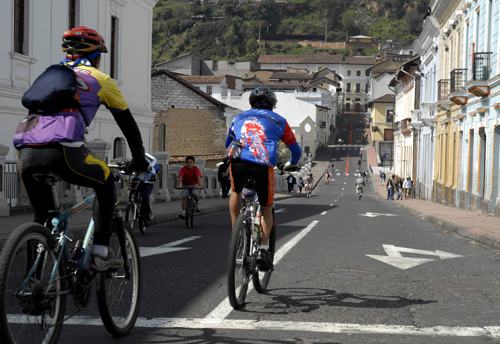 Every Saturday starting May 26 through September 30, bicyclists, joggers, and pedestrians will have free rein on almost a mile of John F. Kennedy Drive, the main drag through Golden Gate Park. The usual denizens of the road - autos - will be banned, detoured elsewhere.
Vehicles are already prohibited in parts of the park on Sundays, and the decision to "go carless" on Saturdays as well concludes a heated seven-year debate. In the end, arguments that such road closures promote family activities, more active lifestyles, and tighter-knit communities carried the day.
The auto's demotion at Golden Gate Park follows dozens of similar moves in at least 20 American cities in the past three years. It's a trend that is gaining ground rapidly in the U.S., say urban planners.
New York is proposing to shut down perimeter roads of Central Park and Brooklyn's Prospect Park all summer long.
Atlanta plans to transform 53 acres of blighted, unused land into new bike-friendly green space.
Philadelphia, Cleveland, Chicago, and El Paso, Texas, are planning events to promote car-free days in public parks, most in the hope that the idea will become permanent or extend for months.
"Cities across America are increasingly declaring that parks are for people, not cars, ... and closing roads within parks is one result of that," says Ben Welle with The Trust for Public Land's Center for City Park Excellence, in Washington.
Minimizing the problem
Resistance can be fierce at first, he and others say, because of worries about traffic congestion, parking problems, and loss of visitors for businesses and museums. But studies are showing that traffic problems can be minimized, shops and museums get more visitors, and residents begin to cherish their where-the-action-is location.
Not everyone is convinced, saying the jury is still out on how no-car zones affect neighborhood vitality. In San Francisco, for instance, the de Young Museum has said its delivery schedule must be adjusted because of the new road closure, and it is concerned that patrons with physical disabilities may not be able to get to the museum as readily.
The model
The model city for road closure is Bogota, Colombia, which in 1983 embarked on a program called ciclovia (bike path), in which designated streets were closed to cars every Sunday but open for jogging, biking, dancing, playing ball, walking pets, strolling with babies - anything but driving. One-and-a-half million people now turn out each week for ciclovia. Other cities in Latin America followed suit, closing parts of parks or whole urban districts to cars - some intermittently, some permanently. A result: revitalized neighborhoods and an influx of people.
Smaller U.S. cities, from Davenport, Iowa, to Huntington Beach, California, are also starting to create car-free zones, according to Welle's studies.
El Paso gets on track
Beginning this month, El Paso will detour cars from seven roads every Sunday from 7 to 11 a.m. so that cyclists, joggers, and pedestrians can use them instead.
"City leaders were faced with a challenge: to get a poor city of overweight, sedentary people moving when there weren't any parks or [bicycle] lanes," says Robin Stallings of the Texas Bicycle Coalition. A national magazine declared the city one of the four fattest in the U.S., he says, "and that really got everyone's attention."
Two years of planning and US$100,000 in donations made the program possible. El Paso is the first ciclovia city in Texas - and it needs it more than most, says Beto O'Rourke, the city councilman who championed the idea. It has just 25 percent of the park space of the average U.S. city, a smaller tax base, and few spaces for pedestrians or bicyclists, he says. "This solves a lot of problems at once."
Low-cost initiative
The trend reflects cities' response to residents who, after streaming back to city centers, want more pedestrian amenities.
"The great thing about ciclovia is that cities can do it very inexpensively. All the infrastructure is already there; there is no added capital cost," says Gil Penalosa, former parks and recreation director for Bogota who helped expand its network of closed roads from 8 miles in 1997 to 70 miles today.
In some ciclovia cities, such as Guadalahara, Mexico, fears that autoless streets would cause economic hardship have dissolved. Some merchants actually had to return to their stores on Sundays because the thousands of visitors wanted everything from food and drink to curios.
"The economic boost to Guadalahara has been tremendous," says Rob Sadowsky, a Chicago bike activist who recently visited the city for a ciclovia symposium. Sadowsky is organizing an August event in the Windy City that, if successful, would extend next year from May to October.
In the U.S., say observers, the clamoring for car-free park space is intensifying because of two other trends: global warming and obesity rates.
"Climate change and the obesity crisis have [rejuvenated] the movement for car-free space," says Paul White of Transportation Alternatives, which works to reclaim roads from autos. As of last year, he notes, more of Earth's inhabitants live in cities than in rural areas. "Now we have to figure out what urban habitat will sustain ourselves ... it's all about reducing car use."