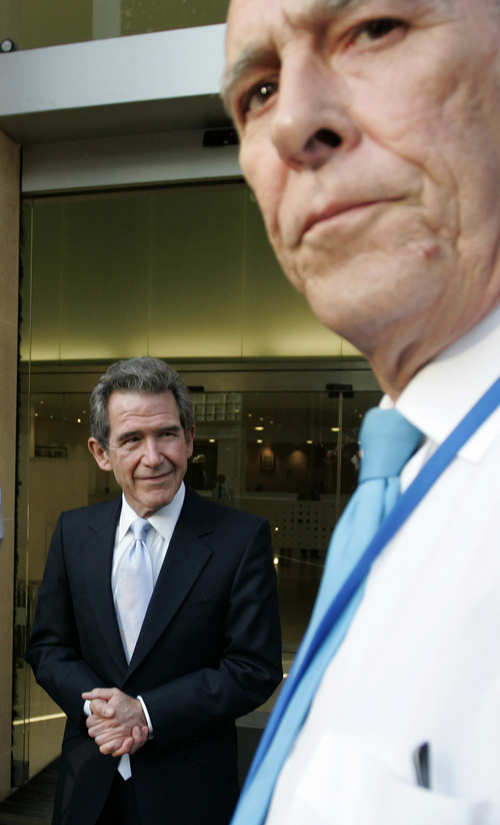 John Browne stepped down as chief executive officer of BP Plc three months earlier than planned after losing a legal battle to prevent the publication of claims he let a former boyfriend use company resources.
BP, Europe's second-biggest oil company, said Tuesday in London that Tony Hayward, who was scheduled to replace Browne August 1, takes over the position immediately. BP said allegations Browne misused resources were "unfounded or insubstantive."
Browne's decision follows a ruling by the High Court in London, released Tuesday, that he lied in his bid to block publication by the Mail on Sunday of the boyfriend's account of their four-year relationship. Browne, 59, built BP into what was once Europe's biggest company through more than US$100 billion of acquisitions. In the past two years, he faced shareholder wrath over a deadly Texas refinery blast and oil leaks in Alaska.
"Hayward will no doubt drive the company forward as best he can," said Jason Kenney, an analyst with ING Wholesale Banking in Edinburgh. "I think it would be difficult for Lord Browne to be at the helm of BP and go through what's expected to be quite an investigative journalistic period."
Details of Browne's four-year relationship with Canadian Jeff Chevalier were published Tuesday in court documents after Britain's highest court refused to hear Browne's appeal for a publication ban. The High Court and the Court of Appeal had already rejected his attempt to block the story.
Chevalier claims Browne supported him with BP "resources and manpower," and that Browne paid him a "large sum of money" over their relationship, those documents say. A Mail on Sunday journalist first contacted the BP press office about the story on January 5, according to the ruling. Browne announced he was stepping down a year early from his position a week later.
"In my 41 years with BP I have kept my private life separate from my business life," Browne said in Tuesday's BP statement. "These allegations are full of misleading and erroneous claims. In particular, I deny categorically any allegations of improper conduct relating to BP."
Shares of BP slipped 0.4 percent to 563 pence in London.
Browne admitted that he had lied to the court about how he first met Chevalier and that he later retracted and apologized for the untruthful account. He said in the statement that the decision to bring forward his retirement "is a voluntary step which I am making to avoid unnecessary embarrassment and distraction to the company at this important time."
Known as Lord Browne since being appointed a member of the U.K. parliament's upper chamber in 2001, he pushed ahead of his competitors in acquiring new supplies when BP formed a Russian joint venture with OAO Tyumen Oil Co., known as TNK-BP. Browne also fashioned BP as an environmentally friendly oil company, becoming the first CEO of a major oil producer to acknowledge global warming, 10 years ago.
BP said Browne will forego some bonus payments worth as much as 15.5 million pounds (US$31 million) as a result of his resignation. Almost a fifth of BP's shareholders voted against pay and bonus packages for company directors at a meeting last month, arguing payouts weren't justified following the safety and environmental lapses in Texas and Alaska.
Hayward, 49, who was head of the company's exploration and production division, its biggest business unit, now takes over. A geology graduate of Edinburgh University in Scotland, Hayward joined BP in 1982 and after a succession of posts in France, China, Colombia and Venezuela, returned to London in 1997 as a director of BP Exploration. Two years later, he became a group vice president and was appointed to the board in 2003.
Browne is a member of the board of Goldman Sachs Group Inc., the world's biggest securities firm, where he heads its audit committee. Lucas van Praag, a Goldman spokesman in London, declined to comment on whether he would remain on the board.
Browne has been a board member of Goldman Sachs since May 1999, making him one of only two board members who have served since the company's initial public offering.
"Given the issues, it would be highly appropriate for the Goldman Sachs board to seriously consider asking him to step down," said Eleanor Bloxham, president of the Corporate Governance Alliance in Columbus, Ohio. "Integrity is the No. 1 characteristic that you look for in a director and I think this would raise serious concerns."
Browne also has been chairman of the advisory board of private equity firm Apax Partners Worldwide LLP since late last year. Apax spokesman Ben Harding declined to comment.