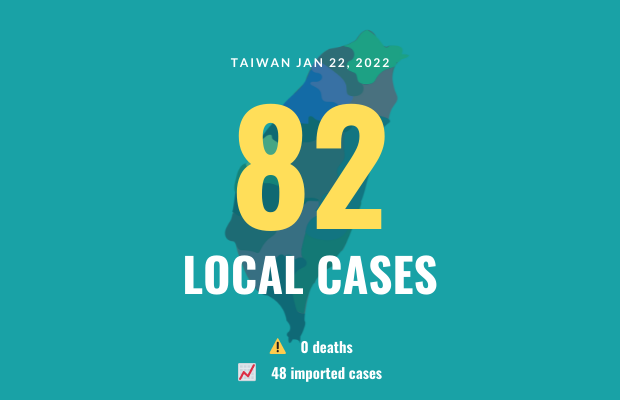 Most of the new local infections were recorded among employees of Askey Computer Corporation at the Farglory Free Trade Zone in Taoyuan City. Two foreign staff members had a meal at a Tasty steakhouse in the Zhongli District of the city on Jan. 9, but without scanning the required QR code when entering the location.

As a result, they were not tracked down until this week following a cluster at the restaurant linked to a bank branch and to Taiwan Taoyuan International Airport. Following testing of more than 1,000 Askey staff Friday (Jan. 21), the cluster expanded to a total of 70 employees, including 63 migrant workers, reports said.

Of Saturday’s imported cases, 24 cases had been diagnosed following tests at the airport, while 24 others had been found later, during their quarantine period, reports said.

Taiwan’s latest total number of 18,239 coronavirus patients included 14,854 domestic cases and 3,331 imported ones. The 851 fatalities from the pandemic included 838 due to local infections, with New Taipei City registering 413 deaths and Taipei City 322.
Since the beginning of the pandemic, Keelung reported 29 deaths, Taoyuan 27, Changhua 15, Hsinchu County 13, Taichung five, Miaoli three, Yilan and Hualien two each, and Hsinchu City, Tainan, Kaohsiung, Nantou, Yunlin, Pingtung and Taitung one each. The 13 other deaths were imported cases.

A total of 36 COVID cases originated from a journey by the Taiwan Navy’s "Goodwill Fleet" in 2020, three were infected on board a flight, one case was classified as unresolved, and 14 cases were put under investigation. A total of 116 earlier patients were removed from the list of confirmed cases.